It’s quite thoroughly overcast, with times when it’s bright, but never quite clearing up. Considering that it’s nearly 1pm, that’s pretty unusual. It’s just 60F, great weather for working outside!

We’re not in trouble out here, but watch out and be very, very careful in

the South Valley and up and over the Cascades! If you load the map on this link and then click on the picture there’s text with more specifics. http://www.wrh.noaa.gov/firewx/wfo=pqr Lots of places are evacuated and off-limits including the Radical Faerie Sanctuary at Wolf Creek. As they were leaving, flames were just on the other side of the hill. Please send good energy to those who are trying to contain the fires and to the tree people who might be hurt in these fires.

Yesterday started really intense. I got up and got the newsletter out and from then until past 2pm I was doing e-mails, working with suppliers, talking with other people online about projects and orders. …and then Tempus walked in and he realized that I had neither eaten breakfast, nor had any coffee….. So he fed me, so I did the “fed python” thing and fell asleep. <sigh>

So, waking around 6pm, he had moved a bunch of stuff in my study, so that I could put some of my Dad’s records into a storage shelf and then he could move the photo albums. Things are *gradually* accumulating and once they’re in permanent spots, they should accumulate faster and not get re-scattered. Well, one can hope….

Can you tell I found some of my “wiggly” clipart? 🙂 I ended up sorting pictures and clipart during the evening. That happened because I couldn’t find something on the computer… and then finally found it and posted it around 12:30am…..

Today Tempus is home. He had to catch up on some sleep, but I didnt’ expect us to get up *this* late! I’m hoping he’s going to get some time in the kitchen. He’s promised to help me with more boxes…. Herbs Outdoors at 3pm. I think we’re going to move some compost… I hope. …and more house chores in the evening.

Isn’t this little guy cute? That’s a great costume! I know it’s early for Halloween, I just couldn’t resist when I found the pic! 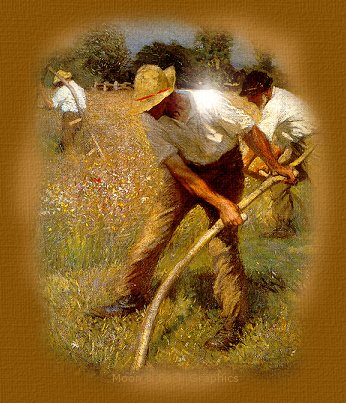 Today’s Feast is Lughnasadh Eve. If you’ve been watching the Magick section over the last month, you know what that means! Traditionally, these feasts were held as the harvests began

Today’s Plant is the Evergreen Violet, Viola sempervirens. This is a pretty plant that looks like nothing much through 9 months of the year here on the coast, but is spectacular in March, when it covers the ground with beautiful golden flowers on a deep blue/

green background and still lovely in April/May. It is indeed evergreen, not withering to the ground, although it sometimes is overshadowed by grass. It grows well in the park behind the house. As any viola it is Feminine, ruled by Venus, but unlike the blue violets (corresponding to water) the Evergreen Violet corresponds to the element of Air and the Sun – Protects against malevolent spirits, brings changes in luck & fortune, wear to help with headaches, dizziness and to bring calm and sleep, wear in a green sachet to heal wounds.

The shop is closed on Tuesday/Wednesday for our weekend.  Spring hours are 11am-7pm Thursday through Monday. If we’re supposed to be closed, but it looks like we’re there, try the door. If it’s open, the shop’s open! In case of bad weather, check here at the blog for updates, on our Facebook as Ancient Light or call the shop at 541-563-7154.

Find Altair again high in the southeast after dark. To its right, by about a fist and a half at arm’s length, is the dim but distinctive little constellation Delphinus, the Dolphin, jumping leftward.

Uranus (magnitude 5.8, in Pisces) and

Neptune(magnitude 7.8, in Aquarius) are nicely placed in the southern sky before the beginning of dawn. Finder charts for Uranus and Neptune. http://www.skyandtelescope.com/observing/highlights/Uranus-and-Neptune-in-2013-190064991.html

Runic half-month of Thorn, 7/29-8/12 – Northern Tradition honors the god known to the Anglo-Saxons as Thunor and to the Norse as Thor (right). The time of Thorn is one of ascendant powers and orderliness. This day also honors the sainted Norwegian king, Olaf, slain around Lammas Day. Its traditional calendar symbol is an axe.

Tinne  Holly  Jul 8 – Aug 4 – Tinne  – (CHIN-yuh), holly – The holly (Ilex aquifolium L.) is a shrub growing to 10 m (35 feet) in open woodlands and along clearings in forests. Hollies are evergreen, and stand out in winter among the bare branches of the deciduous forest trees that surround them. Hollies form red berries before Samhain which last until the birds finish eating them, often after Imbolc. The typical “holly leaf” is found on smaller plants, but toward the tops of taller plants the leaves have fewer spiny teeth. Hollies are members of the Holly family (Aquifoliaceae). The common holly is often cultivated in North America, as are hybrids between it and Asiatic holly species. http://en.wikipedia.org/wiki/Holly

Affirmation/Thought for the Day – The tongue must be heavy indeed, because so few people can hold it.

Journal Prompt – What is? – What’s the finest education?

Duality
Digit applies to fingers and toes,
Precipitation to rain and to snow,
Child may be either girl or boy
Tofu and tamari both mean soy.
Limbs are legs as well as arms
Enchantment includes both spells and charms.
Simple words compound confusion
Unless you reach the right conclusion! – Written and Submitted ByTasha Halpert, www.heartwingsandfriends.com

Materials
Sculpey or other oven-bake clay, in green, yellow, gold/ochre and brown. If you’re going to include other representations of the God you’ll also need blue and black.

Rolling pin or flat-sided bottle
Cookie cutters, presses, clay tools or just a small knife and a ruler
Baking sheet
Something to poke a hole with… a skewer, an awl, a ball-point pen…..
Oven
craft magnets, the heavy-duty ones (AS&S has them http://www.sciplus.com/ http://www.sciplus.com/s/c_13/sf_125)
Glue that will stick both metal and plastic, like E-6000.

To make an ear of corn (maize)

You can make wheat with this process, as well.

You can make many more shapes for these. If you have red or orange, you can make poppies, for instance, brown for bread loaves, etc.

To add the Youth and the Sage to the Grain God, take the original shape before baking. Make two 1 inch flat circles, one white and one black and place them under and to either side of the ear. Make sure they adhere to the original ear before baking.

Silliness – Procrastination is the art of keeping up with yesterday.