Yesterday I got up well before Tempus did and got the newsletter out. I was hoping he would stay asleep and get caught up, but he was up by noon. He made us coffee and then we had cereal, sausage and hard-boiled eggs with lots of fruit for breakfast.

I was working on a project to print a fabric with “clothes” for some stuffed bunny rabbits that we have. I’ve been thinking about doing some for awhile, but most of the designs took more sewing than I wanted to do, but I got inspired. I was done with that by 1:30 and working on uploading it to Spoonflower. I also finished some other tags and things that needed uploading and by 4 pm I was done with that and had placed an order with Spoonflower.

It had cleared up so that there was plenty of sunshine during the mid-afternoon when I finally noticed. 🙂 I get to concentrating too hard, sometimes! The Duckmeister called with a string trimmer malfunction, so Tempus  went over to see if he could fix it, but it’s going to take some doing. He got back not long after 4 and went to work out in the garage.

It clouded up well before 6pm and I thought about heading out to work in the garden and then never quite got there. Tempus decided to make twice-baked potatoes for supper after making a perfect bread loaf. He looks so very smug…

By 8pm the clouds had dropped to 200 feet, so it was nicely foggy and becoming drippy and altogether “mist”-erious. It was 62F, just right for having windows open.

I spent the tail end of my evening wading through a treatise on weather fluctuations in the North Atlantic in the Middle Ages and how they affected the Greenland and Iceland settlements.

Today he’s working for a friend, doing some chores and I’m doing chores here at home, newsletter, mostly. We have Herbs Outdoor at 4pm if it doesn’t rain.

Kinda hafta read this one carefully. 🙂 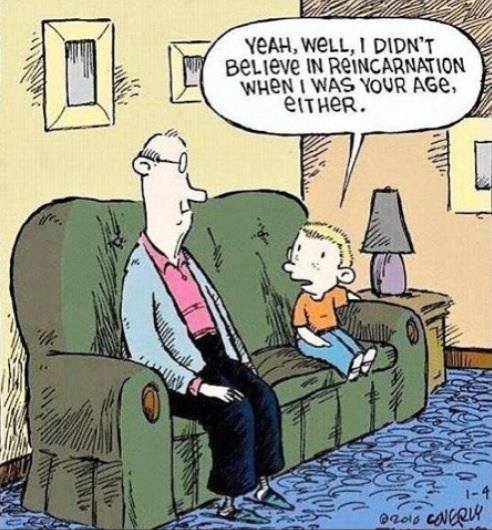 Today’s feast is in honor of the day that the Gay Pride Rainbow Flag first flew in 1978. It has a history and the color order is that of the spectrum. It may have been used in he 60′s as a diversity symbol but this is the first one associated with a large Gay Pride day.  http://en.wikipedia.org/wiki/Rainbow_flag_(LGBT_movement)

Today’s Plant is Cow parsnip, Heracleum lanatum, or Indian Celery.Growing in every damp place along the roads out here, this is easily confused with seacoast angelica, and other plants, and even dangerously with water hemlock, if you don’t look carefully, or dig it up to check the root. It’s a huge plant (over 6 feet tall) with leaves large enough to make a hat from! Local peoples used it as a poultice plant for bruises and sores. The young stems and leaf stalks can be peeled and

eaten in spring. The root makes a nice yellow dye. – Feminine, Water, Moon, Hathor – The flowers glow in the moonlight and I have used this as a plant of sacrifice to Bona Dea or the Great Mother in one of her many aspects as it is a symbol of the plenty of spring. More here:http://en.wikipedia.org/wiki/Heracleum_lanatum

The shop is closed on Tuesday/Wednesday! Summer hours are 11am-7pm Thursday through Monday. Need something off hours? Give us a call at 541-563-7154 or Facebook or email at ancientlight@peak.org If we’re supposed to be closed, but it looks like we’re there, try the door. If it’s open, the shop’s open! In case of bad weather, check here at the blog for updates, on our Facebook as Ancient Light, or call the shop.

The Moon is in Hecate’s Brooch going Dark at 1:08pm. Waning Moon Magick – From the Full Moon to the New is a time for study, meditation, and magic designed to banish harmful energies and habits, for ridding oneself of addictions, illness or negativity. Remember: what goes up must come down. Phase ends at the New on 6/27 at 1:08am. Hecate’s Brooch – 3-5 days before New Moon – Best time for Releasing Rituals. It’s the last few days before the new moon, the time of Hecate’s Brooch. This is the time that if you’re going to throw something out, or sweep the floors, or take stuff to Good Will, do it! Rid yourself of negativity and work on the letting go process. Release the old, removing unwanted negative energies, addictions, or illness. Do physical and psychic cleansings. Good for wisdom & psychic ability. Goddess Aspect: Crone Associated God/desses: Callieach, Banshee, Hecate, Baba Yaga, Ereshkigal, Thoth. Phase ends at the Dark on 6/25 at 1:08pm. Dark of the Moon, End of the cycle – In the time leading up to the “New Moon” you may do banishings and other baneful magicks and healings that require blasting a disease away, as well as using the time for introspection and self-work. Do scrying, now. Good for reversing circumstances God/dess Aspect: The One Beyond, the Watchers in the Outer Dark, psychopomps. Associated God/desses: Hecate, Kali, Arianhrod, Anja, Kore in the Underworld, Ereshkigal who was Inanna, Set/Seth, Hades, Osiris. Phase ends at the Tide Change on 6/27 at 1:08am.

Wednesday, June 25, dawn –  <<< Aldebaran and the Moon – The moon passes just north of the bright star Aldebaran in Taurus. 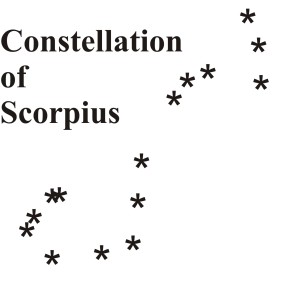 With Scorpius >>>> now in fine evening view, keep an eye on the doings of Delta Scorpii. This is the middle star in the row of three marking Scorpius’s head. In July 2000 it unexpectedly doubled in brightness. It has remained brighter than normal ever since, with fluctuations, at about magnitude 2.0. Compare it to Beta Scorpii above it, magnitude 2.6, and Antares, 1.1. See the June Sky & Telescope, page 51.

Mars (magnitude 0.0, in Virgo) is high in the southwest in twilight, with Spica to its left. Mars sets in the west around 1 a.m. daylight saving time. In a telescope, Mars’s gibbous disk is 10 arcseconds tall and shrinking. Use our Mars Profiler to find which side of the planet will be facing Earth when you plan to look.

Runic half-month of Dagaz/ Dag, 6/14-6/28. – Beneficial rune of light, health, prosperity and openings, signifying the high point of the day and the high point of the year when in light and warmth all things are possible. Runic New Year’s Eve, final day of the runic year June 28 – Runic New Year and half-month of Fehu/ Feoh, 6/29-7/13 Important in the runic year cycle, today marks beginning of the first rune, Feoh, sacred to Frey and Freya (Freyja), the lord and lady often worshipped in modern Wicca. It is the half-month of wealth and success. Nigel Pennick, The Pagan Book of Days, Destiny Books, Rochester, Vermont, USA, 1992, 1992

Celtic Tree Month of Duir/Oak, Jun 10 – Jul 7 – The oak of myth and legend is the common oak (Quercus robur L.). It is sometimes called the great oak, which is a translation of its Latin name (robur is the root of the English word “robust”). It grows with ash and beech in the lowland forests, and can reach a height of 150 feet and age of 800 years. Along with ashes, oaks were heavily logged throughout recent millennia, so that the remaining giant oaks in many parts of Europe are but a remnant of forests past. Like most other central and northern European trees, common oaks are deciduous, losing their leaves before Samhain and growing new leaves in the spring so that the trees are fully clothed by Bealltaine. Common oaks are occasionally cultivated in North America, as are the similar native white oak, valley oak, and Oregon oak. Oaks are members of the Beech family (Fagaceae). Curtis Clark

Affirmation/Thought for the Day – To forgive is to set the prisoner free, and then discover the  prisoner was you.

Journal Prompt – What do you think? – Think about the phrase “random acts of kindness”. What are five things you could do for someone this week just to be kind?

~  It took me a long time not to judge myself through someone else’s eyes. –  Sally Field
~  Being fully present is the best guarantee for a bright future. – Guy Finley
~  A business that makes nothing but money is a poor kind of business. – Henry Ford
~  If you are not too large for the place you occupy, you are too small for it. – James A. Garfield (1831-1881) 20th US President

If there were no windows,
There’d have to be more doors;
It’d be too dark to find our chairs,
So we’d just sit on the floors.

Morning Edition, June 26, 2009 – Years ago, Jim Crawford, a farmer in south central Pennsylvania, noticed that one of his summer loves — rhubarb  — had fallen out of favor. Neighbors near his New Morning Farm were letting this tart perennial languish in their gardens, too lazy to dig it up, too uninterested to harvest it. Crawford offered to buy what they were growing and sell it at the farmers markets around Washington, D.C., where he’s been operating stands for 37 years.

“It sounds funny,” Crawford says, “but it was kind of common that people seemed to have that attitude about rhubarb. Dismissive.  And then, of course, when they got $1.60 a pound for it they said, ‘Hey, you know, this stuff is worth something!'”

In recent years,  Crawford has seen resurgence in demand for rhubarb, often fueled by nostalgia. Ed Kahl, a customer at one of Crawford’s fresh fruit stands, says he grew up eating rhubarb dishes.

“It reminds me of my grandmother and mother, and they made these luscious pies. I’ll probably just buy it and let it rot in my refrigerator! But I have aspirations to make a pie.”– rhubarb chunks in fruit-flavored gelatin. (He admits this sounds a bit gross, but he swears it makes a great buffet dish.)

“I’ve cooked everything but rhubarb. I’m afraid it’ll be too sour or chewy or something,” she says.

Crawford finds this attitude a lot, so he posts a “helpful hints” sign by the box of glistening red stalks.

“It’s the easiest thing in the world to cook,” he says. “You just chop it up and put some sweetener with it, and put it in a pan with a tight lid, and in about five minutes it just melts like butter.”

Crawford sweetens his with maple syrup, but sugar works, too. He likes rhubarb sauce over ice cream. He also puts rhubarb in jam, chutney and a whole array of pies, not just the classic strawberry-rhubarb combo.

Silliness – YOU KNOW IT’S GOING TO BE A BAD DAY WHEN:

You wake up face down on the pavement
You call Suicide Prevention and they put you on hold
You put your bra on backwards and it fits better
Your birthday cake collapses from the weight of the candles
Your son tells you he wishes Anita Bryant would mind her own business
You want to put on the clothes you wore home from last night’s party – and there aren’t any
You turn on the news and they’re showing emergency routes out of the city
Your twin sister forgets your birthday
You wake up to discover that your waterbed broke and then realize that you don’t have a waterbed
Your horn goes off accidentally and remains stuck as you follow a group of Hell’s Angels on the freeway
You see the “60 Minutes” News Team waiting in your Office
Your boss tells you not to bother to take off you coat
You walk to work and discover that your dress is tucked in the back of your pantyhose
Your kid say “Did you know that it’s almost impossible to flush a grapefruit down the toilet?”
Your driving to work smoking a cigarette. At a stop light, you drop it between your legs. As you frantically search for it, a full city bus pulls up alongside of your car.
You wake up to late to catch the van pool – then you realize that you’re driving the van this week