52F and rather gloomy this morning. There are water droplets falling off things occasionally, but I don’t know whether it’s actually raining or not.

Yesterday morning, after the newsletter went out, I went and curled back up next to Tempus and we didn’t actually get up until past 10am. I started in on catching up on mail and doing a little research into a name derivation which ended up with me sending several e-mails to the Ukraine and to the Czech republic. He was working hard in the kitchen.

Tempus left for the friend’s house at about 2:30, I think. By then I was working on photos for the historical recreation blog that I also do and it had started to rain and was getting very grey and gloomy.

I finally got the report done around 4:30, because I got distracted into some blackwork research and then got nabbed by someone looking for projects to work on. Wanting to get my hair dry before esbat, I got a shower and then sat down to do some tweaking on the blogs.

We had a good esbat, got a lot of work done and I was home a little after 9. Tempus didn’t get back home until well past 11. He hadn’t even expected to miss esbat! We crawled in early, but talked awhile.

Today we’ve got a lot do. Tempus is going back to that friend’s place to finish up today and he may be taking our elderly friend to Lincoln City for a doctor appointment. I’ll be at the shop with Travis, continuing to work on the sorting process. I’m mostly down to trying to go through craft supplies, but I want to find my labeller to put some tags on drawers to make it easier for other folks to find what I’m talking about. I have pictures to take and some more product to check in, etc.

The “Blood Swept Lands and Seas of Red” poppy memorial at the Tower of London. (REUTERS/Suzanne Plunkett) This was completed for Armistice Day (11/11) and the poppies are now being distributed. These are ceramic poppies on stems from 18 inches to 3 feet long that were planted in what used to be the moat as a memorial to the British and Colonial deaths in WWI. 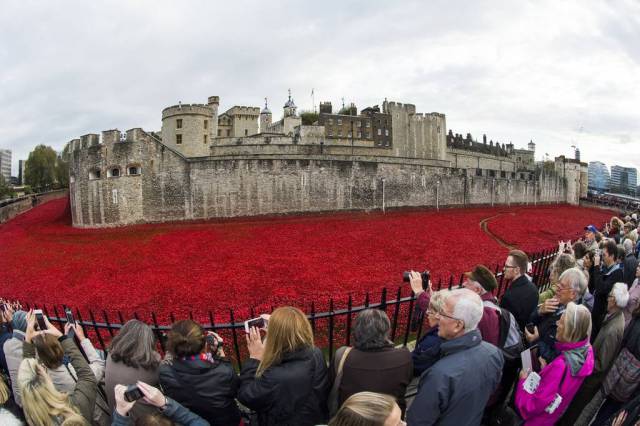 Lupines are represented on the coast by the Large-Leaved Lupine, Lupinus polyphyllus, (which is often the common garden variety and all over out here)http://en.wikipedia.org/wiki/Lupinus_polyphyllus and Kincaid’s Lupine, Lupinus sulphureus subsp. Kincaidii (which used to be called Oregon Lupine). The 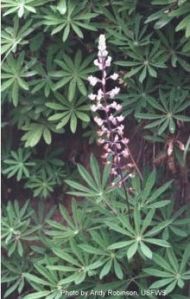 latter is threatened as they’re disappearing and are needed for an also disappearing butterfly.  http://en.wikipedia.org/wiki/Lupinus_sulphureus We also get the yellow varieties of this one on the coast. More on the main lupin species here:  http://en.wikipedia.org/wiki/Lupin These are tall showy flower spikes with a distinctive leaf pattern that bloom all summer into the fall. Some varieties of lupins (the “sweet lupins”) are eaten, but many require soaking in salt water for long periods of time to get the alkaloids out that could be poisonous. These were eaten by the indigenes, but no one has said how they were prepared. There’s a little here about the beans, which are being used as a vegan food, but have a high potential for allergic effects.  http://en.wikipedia.org/wiki/Lupin_bean – Masculine, Fire, Moon – As far as magick goes, it’s not listed very many places, but its old name is “Blood from a head”. The word “lupine” derives from the word for wolf, as well. They are useful in magicks for any canine. In fact, I always include them in amulets for dogs or wolves. They can also be used to help with spirit communication with the canine/lupine totems. They have also been used in curse magicks for getting rid of things like cancers, or resistant viruses and bacteria or even for brain tumors.

Praetextatus and Paulina, pagan activists, Roman Empire – Praetextatus and Paulina, husband and wife, were guardians of the Eleusinian Mysteries. In 364 CE, they resisted the order of the Christian emperor Valentinian I to suppress these already ancient Greek pagan sacred rites. Praetextatus and Paulina were virtuous people and involved with many paths, more than just the Mysteries. They were also proponents of the numen multiplex, which resembles more polytheism/pantheism. They were married for over 40 years and lived out their lives before the worst of the persecutions began, but saw the problems revving up. More here: http://en.wikipedia.org/wiki/Praetextatus_%28aristocrat%29

The shop opens at 11am! Fall hours are 11am-6pm Thursday through Monday, although the time that we’re there is drifting earlier with the shorter days. Need something off hours? Give us a call at 541-563-7154 or Facebook or email at ancientlight@peak.org If we’re supposed to be closed, but it looks like we’re there, try the door. If it’s open, the shop’s open! In case of bad weather, check here at the blog for updates, on our Facebook as Ancient Light, or call the shop.

Waning Moon Magick – From the Full Moon to the New is a time for study, meditation, and magic designed to banish harmful energies and habits, for ridding oneself of addictions, illness or negativity. Remember: what goes up must come down.
Hecate’s Brooch – 3-5 days before New Moon – Best time for Releasing Rituals. It’s the last few days before the new moon, the time of Hecate’s Brooch. This is the time that if you’re going to throw something out, or sweep the floors, or take stuff to Good Will, do it! Rid yourself of negativity and work on the letting go process. Release the old, removing unwanted negative energies, addictions, or illness. Do physical and psychic cleansings. Good for wisdom & psychic ability. Goddess Aspect: Crone Associated God/desses: Callieach, Banshee, Hecate, Baba Yaga, Ereshkigal, Thoth. Phase ends at the entry to the Dark at 7:32pm on 11/20. Dark of the Moon, End of the cycle – In the time leading up to the “New Moon” you may do banishings and other baneful magicks and healings that require blasting a disease away, as well as using the time for introspection and self-work. Do scrying, now. Good for reversing circumstances God/dess Aspect: The One Beyond, the Watchers in the Outer Dark, psychopomps. Associated God/desses: Hecate, Kali, Arianhrod, Anja, Kore in the Underworld, Ereshkigal who was Inanna, Set/Seth, Hades, Osiris. Phase ends on 11/22 at 7:32am.

Whenever <<< Fomalhaut is “southing” (crossing the meridian due south, which it does around 7 p.m. this week),

you know that the first stars of Orion are just about to rise in the east, and the Pointers of the Big Dipper >>> stand directly below Polaris (if you’re in the world’s mid-northern latitudes).

Saturn is hidden behind the glare of the Sun.

Runic half month of Naudhiz/ Nyd /Nauthiz – November 13- 27 – Time to prepare for winter.

Celtic Tree Month of Ngetal/Reed Oct 28 – Nov 24 – nGéadal – (NYEH-dl) – The term “reed” is used with great imprecision in North America, but it is clear that the reed of the ogham is the common reed (Phragmites australis (Cav.) Trin. ex Steudel). This is a giant grass, with stems as high as 4 m (13 feet). It grows in marshy areas, where it often forms dense stands. Like most other grasses, the vertical stems live only a single year, dying in the autumn and being replaced with new green shoots in the spring. The dead stems rattle and whisper in late autumn winds. Common reed has spread as a weed throughout the world; in North America it is widespread in cooler climates. Common reed is in the Grass family (Poaceae, or Gramineae).

“The Reed Month, is said by some to be most favorable for communication with ancestral spirits and the strengthening of all family ties, with magickal associations with fertility, love, protection, and family concerns. ‘Thin and slender is the Reed. He stands in clumps at the edge of the river and between his feet hides the swift pike awaiting an unsuspecting minnow to come his way. In his thinness the reed resembles arrows that fly, silver-tipped, up into the unknown air to land at the very source that one had searched for all these years. Firing arrows off into the unknown is an expression of the desire to search out basic truths. If you loose off without direction, the place of landing will be random. If the firing off is carried out with the correct conviction, determination and sense of purpose, then the act becomes secondary to the event that comes both before and after the moment.'”   Source: Earth, Moon and Sky

Affirmation/Thought for the Day – You don’t have to be religious to be spiritual, Spirituality is how you connect to yourself and the world, mentally, emotionally and physically. We do not get spirituality through religion or philosophy. It is simply the essence of being human.

~  Do every act of your life as if it were your last. – Marcus Aurelius Antoninus
~  The less I behave like Whistler’s mother the night before, the more I look like her the morning after. – Tallulah Bankhead
~  Entrepreneurship is the last refuge of the trouble making individual. – Natalie Clifford Barney (1876-1972) US writer
~  When you’re in love you never really know whether your elation comes from the qualities of the one you love, or if it attributes them to her; whether the light which surrounds her like a halo comes from you, from her, or from the meeting of your sparks. – Natalie Clifford Barney (1876-1972) US writer

It happen’d one Day about Noon going towards my Boat, I was exceedingly surpriz’d with the Print of a Man’s naked Foot on the Shore, which was very plain to be seen in the Sand: I stood like one Thunder-struck, or as if I had seen an Apparition. – from Robinson Crusoe by Daniel Defoe (1660?-1731), English writer, pamphleteer, and novelist – Although commonly referred to simply as Robinson Crusoe, the book’s complete original title as it appears on the title page of the first edition is The Life and Strange Surprizing Adventures of Robinson Crusoe, of York, Mariner: Who lived Eight and Twenty Years, all alone in an un‐inhabited Island on the Coast of America, near the Mouth of the Great River of Oroonoque; Having been cast on Shore by Shipwreck, wherein all the Men perished but himself. With An Account how he was at last as strangely deliver’d by Pyrates. Written by Himself.

Thanksgiving
The year has turned its circle,
The seasons come and go.
The harvest all is gathered in
And chilly north winds blow.
Orchards have shared their treasures,
The fields, their yellow grain,
So open wide the doorway~
Thanksgiving comes again!
~Author Unknown 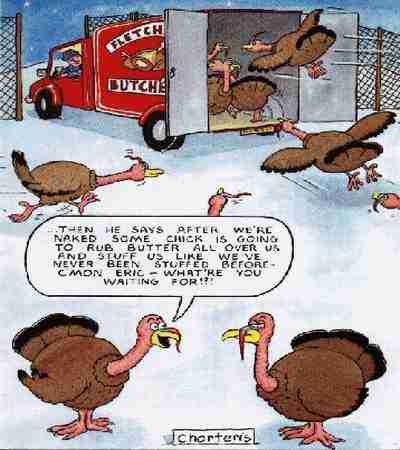