There’s wind in store today. We had one bout a bit earlier, where for a

short while wind was gusting into the 40’s, locally. I’m guessing that it was some kind of squall. The wind is supposed to be picking up along with the rain to peak in the afternoon. There’s a High Wind Warning. Nothing super awful, just typical winter weather. It’s 54F and there was an interesting weather bit last evening. At around 8pm it was clear and it had gotten down to 46F. By 11pm it had clouded up and was up to 53F!

Yesterday was a very long day for me. For some reason I was favoring a painful hip. That just started up out of the blue. I usually have a bit of warning. Despite it, I got a lot done. Tempus and I started with cleaning off the display counters. More stuff accumulated during the day, but most of it got picked up and dealt with. We go the next batch of stuff for sale into the historical re-creation section, some books, some jewelry, a few other bits and pieces and I got my Witch’s Dice!

A bunch of errands happened too, and there are still some packages waiting at the PO, since Tempus missed the card in the stack when he was there.

We had some *really* good news. There’s a fellow who’s been on the energy list since last spring, since he was jailed awaiting trial on a false accusation. He was acquitted of all charges, finally, and came to tell us so!

I was supposed to be cooking last night, but didn’t manage to. With the number of allergens in the air and as exhausted as I was when I got home I fell into bed, but kept hearing things, so I finally got up and read, but I just didn’t get much work done. I did file some leftover papers and sort some old mail, but I really didn’t have much to show for the day.

Today I’m hoping to do better. I was supposed to be home cooking and working on the Mab’s Yule kit. I’m not sure what’s actually going to happen, since the craft supply put-away that I was supposed to be doing yesterday didn’t happen. I thought the young folks were coming down to the shop, but they never showed. Since today is likely to be a very slow day at the shop it’s a good one for getting clean-up done.

From 1910. This is the lighthouse on Yaquina Head that is visible from all over. It was *supposed* to have been built on Cape Foulweather, but there were so many problems with getting the supplies up there, that they moved it farther south. 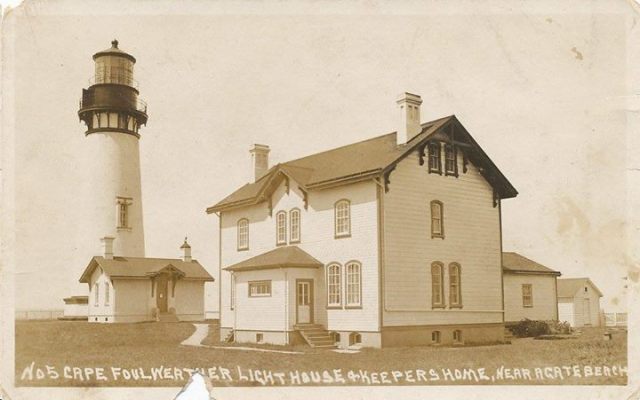 Today’s Plant is Sweet William, Dianthus barbatus. It is often called Carnation, just like others of the dianthus species and I’ve seen it mis-named “phlox” on plant tags at Fred Meyer’s. The difference is the scent. It still has a sweet scent, but not of clove, like gillyflower, or no scent, like phlox. The flowers are edible and attract butterflies and bees, and the seeds will draw birds, who sometimes will also go after the flowers. They’re good as cut flowers, loasting a decent while, being tall, and a cluster, rather than multiple stems. Cate Middleton had them in her bouquet as a nice touch when she married her “Sweet William”. They have the meaning of “Gallentry”. – Masculine, Sun, Air, Venus – All-purpose protection, in healing for strength and energy. Magickally it is very similar to Gillyflowers. http://en.wikipedia.org/wiki/Sweet_william

Day of Kukulkán (Quetzalcoatl); Mayan Kukulkan  – Mayan God from whom the Aztec Quetzalcoatl is derived. – Source of date: The Phoenix and Arabeth 1992 Calendar. The feathered serpent is a major god of the Maya. The symbols date back at least 2000 years, but we don’t really know the forms of the worship. So much was destroyed. More here: http://en.wikipedia.org/wiki/Quetzalcoatl

The shop opens at 11am! Fall hours are 11am-6pm Thursday through Monday, although the time that we’re there is drifting earlier with the shorter days. Need something off hours? Give us a call at 541-563-7154 or Facebook or email at ancientlight@peak.org If we’re supposed to be closed, but it looks like we’re there, try the door. If it’s open, the shop’s open! In case of bad weather, check here at the blog for updates, on our Facebook as Ancient Light, or call the shop. 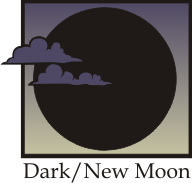 Waning Moon Magick – From the Full Moon to the New is a time for study, meditation, and magic designed to banish harmful energies and habits, for ridding oneself of addictions, illness or negativity. Remember: what goes up must come down. Phase ends on 11/22 at 7:32am.
Dark of the Moon, End of the cycle – In the time leading up to the “New Moon” you may do banishings and other baneful magicks and healings that require blasting a disease away, as well as using the time for introspection and self-work. Do scrying, now. Good for reversing circumstances God/dess Aspect: The One Beyond, the Watchers in the Outer Dark, psychopomps. Associated God/desses: Hecate, Kali, Arianhrod, Anja, Kore in the Underworld, Ereshkigal who was Inanna, Set/Seth, Hades, Osiris. Phase ends on 11/22 at 7:32am. 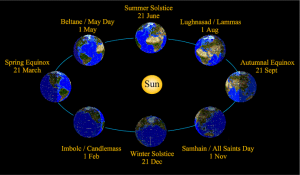 Does it seem like night is already falling about as early as it ever will? You’re right! We’re still a whole month from the winter solstice (in the Northern Hemisphere), but the Sun sets earliest around December 7th, and right now it sets within about 5 minutes from that time (if you’re near latitude 40° north). A surprising result: The Sun actually sets earlier on Thanksgiving than on Christmas near the solstice! This odd offset is made up for by the opposite happening at sunrise: the Sun comes up latest for the year on January 7th.

Uranus (magnitude 5.7, in Pisces) and Neptune (magnitude 7.9, in Aquarius) are high in the southeast and south, respectively, right after dark. They move westward as the evening progresses. Use our finder charts for Uranus and Neptune.

Runic half month of Naudhiz/ Nyd /Nauthiz – November 13- 27 – Time to prepare for winter.

Celtic Tree Month of Ngetal/Reed Oct 28 – Nov 24 – nGéadal – (NYEH-dl) – The term “reed” is used with great imprecision in North America, but it is clear that the reed of the ogham is the common reed (Phragmites australis (Cav.) Trin. ex Steudel). This is a giant grass, with stems as high as 4 m (13 feet). It grows in marshy areas, where it often forms dense stands. Like most other grasses, the vertical stems live only a single year, dying in the autumn and being replaced with new green shoots in the spring. The dead stems rattle and whisper in late autumn winds. Common reed has spread as a weed throughout the world; in North America it is widespread in cooler climates. Common reed is in the Grass family (Poaceae, or Gramineae).

“The Reed Month, is said by some to be most favorable for communication with ancestral spirits and the strengthening of all family ties, with magickal associations with fertility, love, protection, and family concerns. ‘Thin and slender is the Reed. He stands in clumps at the edge of the river and between his feet hides the swift pike awaiting an unsuspecting minnow to come his way. In his thinness the reed resembles arrows that fly, silver-tipped, up into the unknown air to land at the very source that one had searched for all these years. Firing arrows off into the unknown is an expression of the desire to search out basic truths. If you loose off without direction, the place of landing will be random. If the firing off is carried out with the correct conviction, determination and sense of purpose, then the act becomes secondary to the event that comes both before and after the moment.'”   Source: Earth, Moon and Sky

Affirmation/Thought for the Day – Life is what one makes it, and the outside world only reflects what is in your heart

Journal Prompt – What does this quote say to you? – Oh, what a tangled web we weave When first we practice to deceive! — Sir Walter Scott

~  A person asked: “The permanent -what is it?” Joshu said: “That which is impermanent.” The person asked: “Why is the permanent impermanent?” Joshu said: “Life! Life!”
~  We have been repeatedly faced with a cruel irony of watching Negro and white boys on TV screens as they kill and die together for a nation that has been unable to seat them together in the same school room. – Martin Luther King, Jr., Why I Am Opposed to the War in Vietnam
~  I know we can’t abolish prejudice through laws, but we can set up guidelines for our actions by legislation.  – Belva Lockwood (1830-1917) US attorney
~  By entitlement behavior, I mean the apparent belief of too many political figures – make that too many male political figures – that the ordinary rules of acceptable conduct do not apply to them. – Ruth Marcus

Pam’s Thanksgiving Pie – Try Pam’s special Thanksgiving pie, chock full of maple, coconut, pecans, and a healthy dose of holiday cheer! This recipe has been used since 1860! – From, “Atlanta Cooknotes,” published in cooperation with your Daily InBox newsletter.

Pour into unbaked pastry shell.  Bake on lowest rake of oven for 45 minutes or until a knife inserted in center comes out clean.  Cool and chill two to three hours.  Pie filling becomes a custard with a crunchy top.

Mix the cake according to directions on the box.
Pour the cake mix into ONE cupcake liner.
Pour the rest of the cake mix into the bundt cake pan, coating the pan as directed on the box.
Bake according to the directions on the box, making sure you don’t over bake the cupcake.
Let cool.
Mix up a small amount of frosting in one mixing bowl using green food coloring.
Mix up the rest of the frosting in another mixing bowl using red and yellow food coloring to create orange.
Frost the cake with the orange frosting.
Frost the cupcake on the sides and bottom with the green frosting.
Place the cupcake, bottom side up, on the top of the cake.
Makes a nice table decoration.

Q: Why can’t you take a turkey to church? A: Because they use such fowl language.