<sigh> I live with a punster…. As we were pulling out of the driveway this morning Tempus had his window open so he could see to not drive off the side of the driveway. Suddenly, he spluttered and shook his head because an evergreen tree branch had slipped into the car and gotten water from the light rain all over him. I said, “I guess you’re feeling spruce?” He said, “No, because I’ve just been pitch-slapped!”

Open Circle for Beltane! Friday 4/29. Meet at Ancient Light at 7pm and we’ll carpool to the Sabbat site!

Today’s Sewing Workshop is going to move down the street to Made by the Beach! That’s 3-5pm at 205 Sw 101. No evening session today. Those will still happen at Ancient Light.

55F with almost no wind and going back and forth from watery sunshine to cloud to sprinkles. 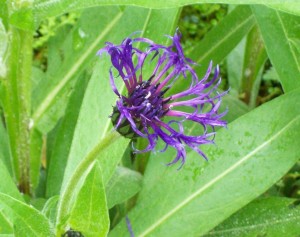 Once I got the newsletter out yesterday we started in on the previous night’s boxes. Tempus got sidetracked by a friend of Jeanne’s for a while and they talked for a bit… over an hour. 🙂 After that he took the sorted stuff to storage and grabbed another load. I was working steadily on inventory and stock and trying to get the work table area cleaned enough to use. 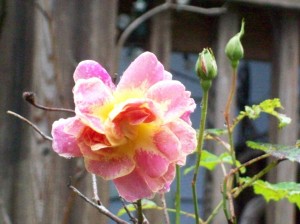 In between working in back I was printing out cards and tagging some of the things we’ve been making in the Project Days. We got the 2nd load sorted and then went across the street for supper. After that we hurried back, loaded the car and took the stuff to storage. 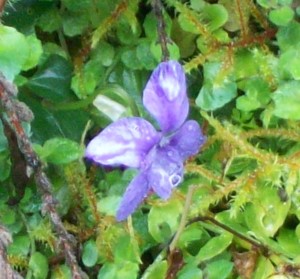 There wasn’t much left of the evening at the point and first he fell asleep, fully clothed, then I conked out, and we kept taking turns being awake and asleep!

Jeanne was out working in the garden when we left this morning, looking rather damp around the edges, but dressed for it.

Today we’re going to spend some time in the workroom, then I have more tagging to do and he has shifting to do in the back. At 3pm I’m heading for Sewing and then he’s going to take a turn at tagging and packing some of the projects. I’m not planning on an evening Sewing session because I’m hoping to have another load of boxes go away during the early part of the evening, again.

A photo by Ken Gagne (on 4/24/16) of the spouting horn along Yachats Wayside Ocean Road with Yachats behind it and a beautiful clump of Sea Pink (Thrift) in the foreground.

Today’s Plant is Bleeding Heart, lamprocapnos spectabilis (which Cunningham has as dicentra spectabilis, an older designation). Other names are: old-fashioned bleeding-heart, Venus’s car, Lady in a bath, Dutchman’s trousers, or Lyre-flower, which all have various folklore attached. They’re native to Asia, but are common garden ornamentals and so suited to our climate that I assumed that they were native here! You see them all through the woods at this time of year. – Feminine, Venus, Water – Used in magick mostly as a divination. Crush the flower. If it “bleeds red” there is love. If it “bleeds white”, either love has died, or there is no hope of it. Be careful if you bring the live plant indoors because it can produce irritation and anger between people in the household. To forestall this push a silver bead or a dime (standing in for silver) into the soil, and say, “Lady of the Moon, give us peace, in your honor, and we honor you!”  http://en.wikipedia.org/wiki/Lamprocapnos_spectabilis

[Edited from Wikipedia] Anzac Day is a national day of remembrance in Australia and New Zealand that broadly commemorates all Australians and New Zealanders “who served and died in all wars, conflicts, and peacekeeping operations” and “the contribution and suffering of all those who have served.” Originally 25 April every year was to honour the members of the Australian and New Zealand Army Corps (ANZAC) who fought at Gallipoli during World War I. Anzac Day marks the anniversary of the first campaign that led to major casualties for Australian and New Zealand forces during the First World War. After the First World War, returned soldiers sought the comradeship they felt in those quiet, peaceful moments before dawn. With symbolic links to the dawn landing at Gallipoli, a dawn stand-to or dawn ceremony became a common form of Anzac Day remembrance during the 1920s. With the coming of the Second World War, Anzac Day became a day on which to commemorate the lives of Australians and New Zealanders lost in that war as well and in subsequent years. The meaning of the day has been further broadened to include those killed in all the military operations in which the countries have been involved. One of the traditions of Anzac Day is the ‘gunfire breakfast’ (coffee with rum added) which occurs shortly after many dawn ceremonies, and recalls the ‘breakfast’ taken by many soldiers before facing battle. Later in the day, ex-servicemen and ex-servicewomen meet and join in marches through the major cities and many smaller centers.http://en.wikipedia.org/wiki/Anzac_Day

The shop opens at 11am! Spring hours are 11am-6pm Thursday through Monday, although the time that we’re there is drifting later with the longer days. Need something off hours? Give us a call at 541-563-7154 or Facebook or email at ancientlight@peak.org If we’re supposed to be closed, but it looks like we’re there, try the door. If it’s open, the shop’s open! In case of bad weather, check here at the blog for updates, on our Facebook as Ancient Light, or call the shop.

Waning Moon Magick – From the Full Moon to the New is a time for study, meditation, and magic designed to banish harmful energies and habits, for ridding oneself of addictions, illness or negativity. Remember: what goes up must come down. Phase ends at the Tide Change on 5/6 at 12:30pm. Waning Gibbous Moon – Best time for draining the energy behind illness, habits or addictions. Magicks of this sort, started now, should be ended before the phase change to the New Moon. – Associated God/dess: Hera/Hero, Cybele, Zeus the Conqueror, Mars/Martius, Anansi, Prometheus. Phase ends at the Quarter on 4/29 at 8:29 p.m. PDT.

At nightfall, Jupiter high in the south and 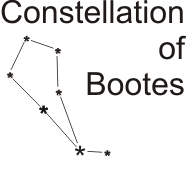 Arcturus >>>>> high in the east-southeast are the two brightest points on their side of the sky. The brightest star below them is Spica.

Uranus is hidden in the sunrise.

Runic half-month of Mannaz/ Man, April 14-28 A time when the archetypal reality of the human condition should be meditated upon. Nigel Pennick, The Pagan Book of Days, Destiny Books, Rochester, Vermont, USA, 1992, 1992 Runic half-month of Laguz, April 29-May 13 – Stands for: Water (or Lake) Color: Black & White (Green) Casting meaning: Laguz represents the power of water and its easy flowing nature. We must learn to “go with the flow” when this rune shows up in a reading so that we can take full advantage of our powers. 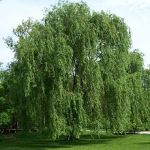 eltic Tree Month of Saille/Willow, Apr 15 – May 12 – The Willow in the Tree alphabet stands for the female and lunar rhythms of life. She is water-seeking, thriving from preference on the damp margins of lakes and streams or across the low-lying water meadows. Water and the tidal movements of the sea are governed by the pull of the moon. The moon in its monthly rhythms is female, contrasting with the male sun’s daily and yearly turnings. In several ways, the Celts held women in higher regard than we do today. On the material level, women were property owners, and whoever controlled the property controlled the marriage. Women of all types and ages appeared in the Celtic pantheon, the spiritual strength and life-giving qualities given by both female and male recognized equally. There were colleges of Druidesses – learned women and teachers – respected equally for their gifts of see-ship, often expressed through dreams, or night visions.
Magical Associations: Romantic love, healing, protection, fertility, magic for women.

Affirmation/Thought for the Day – It’s no wonder the world is the way it is when people’s perspective on the same events can be so different.

Journal Prompt – Auto-Biographical narrative – Do you belong/have you belonged to a club or an organization?

~  To access our psychic abilities we just need to strip away doubt and hesitation, allowing us to use our birthright. Kerr Cuhulain
~  Don’t fight a battle if you don’t gain anything by winning. – Erwin Rommel (1891-1944) German Field Marshal.
~  Empowerment is not so much about seeking a new life as it is seeing and using the one you’ve got more clearly. – Kerr Cuhulain
~  Art is not the application of a canon of beauty but what the instinct and the brain can conceive beyond any canon. When we love a woman we don’t start measuring her limbs. – Pablo Picasso (1881-1973) Spanish artist

Oak and May,
On This Day,
Will both Heed
Those in Need.
Goddess Bright,
God of Sun,
Bless your Children
‘Till our days are done.

At dusk in my woodland garden, sweet woodruff sends out its fresh haylike scent, and its white flowers glow in the June twilight. In June, sweet woodruff reaches the height of its magical power, and is valuable in attracting prosperity. The prosperity spell which follows should be concluded next month, beneath July’s Blessing Moon. On a June evening, just before nightfall, gather some woodruff flowers, leaves, and stems. Cut them all, and put them in a darkened room to dry on a hook or beam. When July’s Moon is at its height, and the woodruff has dried, bury it with a dollar and a copper coin. Now, with what you’ve sown your wealth will increase. By: James Kambos

A Love Charm by Seraphina-m’Anat

Caveat – this is a charm that should not be used on a random “target,” but rather as an enhancement to an established relationship. The reason for this is that, in my experience with this charm ::nudge, nudge, wink, wink::, the essence of the two partners become intertwined, and the charm will happily ensnare you as it bewitches your mate. Spring normally gets us all happily randy, and this charm adds a little more passion and intensity to this feeling. Now, some may call this manipulative of another’s will, but let me offer the witch’s perspective….my hubby knew full well I was a witch when he married me and hasn’t complained so far of any effects of “boosting” so to speak, LOL. Effective enhancements to this charm are self-pampering, as well as spouse pampering; candle light dinners, foods traditionally know to be aphrodisiacs, and exotic music. Silks, velvets, and satins don’t hurt either ::impish grin:: A reliable baby-sitter for any wee’uns in the house is a plus too, if you have children. Is it any wonder that this is one of the witches favourite holidays?

The charm:
By all that lives on land, in sea,
By the ebbing and the flow,
Each time that you do think of me,
Your love for me shall grow.

By numbers odd and numbers even,
By the sacred power of three times three,
Passion for me in your thoughts weave in,
All thy thoughts shall be of me.

By velvet cords of longing,
Your heart to me belonging,
By the white rose and the red,
I am the fire in thy head.

No peace nor increase shall you find,
Until your hand is joined in mine.