It’s another lovely day on the coast. Clear blue sky with little white puffy bits over the mountains, marine layer rolled back almost to the horizon, only a little breeze… It’s 55F and even down by the ocean, the wind is blowing around 5mph. 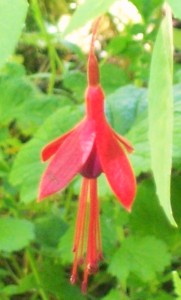 Yesterday I just could not get myself moving. I ended up sitting most of the day, in front of the computer, but at least I got things done there. Tempus got the shelf units off the floor, then headed for Newport to get his check and run some errands.

We were *busy*! Not a lot of sales, but a lot of folks through the door…. It adds up over time. I set up newsletters for over the weekend and finally got to editing pictures. When Tempus got back he sat down on the sofa and promptly went to sleep. 🙂  He didn’t wake until 6pm, by which time I was fighting sleep. 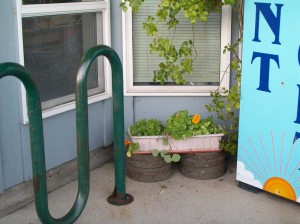 We got closed up and on our way home by 8pm and I embroidered and read during the evening. We were up early this morning, hoping to get some clean-up done before the usual Saturday crowd shows.

The two pix of the nasturtiums today are from when we put the first nasturtium planter out front. Those are temporary, but nice and bright while they last. I was being silly, telling Tempus that I wanted to grow flowers on the car in the other one. 🙂

We have Herbs and Sewing today, although no one has said that they’ll be here. Late today Marius is picking me up so that we can drive to the Portland area tonight. I’m teaching, bright and early, in St. Helens tomorrow. Yes, the newsletter will come out in the morning. This hotel I’m *certain* has WiFi!

Today’s Feast is Hiroshima Day, the anniversary of the day the US dropped a nuclear bomb on this city. Sadako did not live to finish her 1000 cranes, but ever since, people fold them for her intent for life and peace. May we each fold 1000 cranes in our intentions, not for our own blessing, but that of our people and our world.
http://en.wikipedia.org/wiki/Thousand_origami_cranes
http://en.wikipedia.org/wiki/Hiroshima#World_War_II_and_atomic_bombing_.281939.E2.80.931945.29

The Peace Memorial with strings of cranes.

So, the Flanders Poppy,  Papaver rhoeas is today’s plant. It is an agricultural weed, also called “corn flower”, associated with crops since the earliest beginnings of agriculture, since it flowers abundantly in disturbed ground, such as at plowing, and then will flower and seed before the crops are harvested. This is how the poppies sprang up so quickly in the cemeteries of Flanders, as the dead soldiers were interred. These are not the same as the opium poppy Papaver somniferum. The Flanders Poppy and the White Poppy are the two associated with war and worn as symbols, the red poppy meaning the honoring of the dead soldiers and the white, the hope for peace. It is also associated with headaches, both from inhaling the scent and from the headaches from too much crying, from which the folk name, “Head Waak” (pronounced “whack”) comes. –

Feminine, Moon, Water, Hypnos & Demeter – Poppies have been associated with sleep far more than death up until this past century and also with wealth. They are often used in magics to aid sleep. as an ingredient of dream pillows. In wealth & fertility magicks, the abundant seeds are eaten and carried to attract luck and money. A gilded poppypod can be worn as a necklace for the same purpose. They can be added to love foods and added to love sachets. The seeds are not the source of the addictive medicines, so are safe to carry. In more recent times, the associations with blood and death have started cropping up in spellbooks, so be careful. http://en.wikipedia.org/wiki/Papaveraceae

The shop opens at 11am! Summer hours are 11am-7pm Thursday through Monday. Need something off hours? Give us a call at 541-563-7154 or Facebook or email at ancientlight@peak.org If we’re supposed to be closed, but it looks like we’re there, try the door. If it’s open, the shop’s open! In case of bad weather, check here at the blog for updates, on our Facebook as Ancient Light, or call the shop.

Waxing Moon Magick – The waxing moon is for constructive magick, such as love, wealth, success, courage, friendship, luck or healthy, protection, divination. Any working that needs extra power, such as help finding a new job or healings for serious conditions, can be done now. Also, love, knowledge, legal undertakings, money and dreams. Phase ends at Tide Change on 8/18 at 2:27pm. Diana’s Bow – On the 3rd day after the new moon you can (weather permitting) see the tiny crescent in the sky, the New Moon holding the Old Moon in her arms. Begin on your goals for the next month. A good time for job interviews or starting a project. Take a concrete step! God/dess aspect: Daughter/Son/Innocence – Associated God/dess: Vesta, Horus. Phase ends on 8/7 at 1:45am.

Today is the midpoint of astronomical summer: halfway between the June solstice and the September equinox (even though August 1st, Lammas Day, is generally celebrated as the “cross-quarter” day). The exact midpoint of summer is at 2:28 p.m. Eastern Daylight Time (18:28 UT).

Accordingly, the “Spring Star” Arcturus >>> now shines only moderately high in the west after dark, heading down — while the Great Square of

<<<< Pegasus, emblem of autumn, is low in the east coming up. Look for the Great Square balanced on one corner. It’s about 15° on a side, larger than your fist at arm’s length.

Seen any Perseid meteors yet? The shower is due to peak late Thursday night the 11th (see below), but it’s active at lesser levels for many nights before and several nights after. On the morning of August 3rd, writes Bill R. Smith of Choco, California, “I saw four Perseids in an hour,” and on the morning of the 4th, “six in one hour. Looks like we will indeed have a good showing this time!” For now, there’s no interfering moonlight.

Mercury and Venus are very low in bright twilight. About 20 minutes after sunset, look for Venus slightly to the right of due west. Binoculars or a wide-field telescope will help. Don’t confuse Venus with Jupiter well to its upper left. Then try to spot fainter Mercury 9° to Venus’s left or upper left (almost a fist-width at arm’s length). Venus is magnitude –3.8. Mercury is only 1/35 as bright at magnitude 0.0.

Runic half-month of Thurisaz/ Thorn/Thunor, 7/29-8/12 – Northern Tradition honors the god known to the Anglo-Saxons as Thunor and to the Norse as Thor. The time of Thorn is one of ascendant powers and orderliness. This day also honors the sainted Norwegian king, Olaf, slain around Lammas Day. Its traditional calendar symbol is an axe.

Affirmation/Thought for the Day – I understand the meaning of clarity.  I know that clarity comes from the divine.

Journal Prompt – What does this quote say to you? – We are wiser than we know. — Ralph Waldo Emerson

~  The turn in the road is not the end of the road unless you fail to make the turn. – Charmine Shing
~  All things good come to those for whom the Good is all things. – Guy Finley
~  It is only with the heart that one can see rightly; what is essential is invisible to the eye. – Antoine de Saint-Exupery
~  Forever is composed of nows. – Emily Dickinson

In Praise of the Great Bull Walrus

I wouldn’t like to be one
of the walrus people
for the rest of my life
but I wish I could spend
one sunny afternoon
lying on the rocks with them.
I suspect it would be similar
to drinking beer in a tavern
that caters to longshoremen
and won’t admit women.
We’d exchange no
cosmic secrets.  I’d merely say,
“How yuh doin’ you big old walrus?”
and the nearest of
the walrus people
would answer,
“Me? I’m doin’ great.
How yuh doin’ yourself,
you big old human being, you?”
How good it is to share
the earth with such creatures
and how unthinkable it would have been
to have missed all this
by not being born:
a happy thought, that,
for not being born is
the only tragedy
that we can imagine
but never fear. – Alden Nowlan (Between Tears and Laughter: Selected Poems)

Magick – Make Your Own Runes