The sky is a varicolored, smooth grey. It’s brighter toward the south and east, darker to the north and over the ocean. One lone little wisp was floating below the cloud layer over Yaquina John Point as we came over the bridge. The rain is steady and we’ve gotten an inch and 4 tenths since midnight! Yesterday was 1.1 inches. It’s 51F with very little wind, unlike last night.

Yesterday just went. I was writing and Tempus worked on a chainsaw for some friends. We both did some cleaning in the back, trying to get a little farther along. Late in the day we made chicken and dumplings. I did the cooking. He did the finding and peeling (since my good ergonomic peeler is still awol.) I had trouble later in the evening. The gasoline fumes (from the repair) always aggravate my asthma and then some guy who was smoking cornered Tempus right at the front door. That’s just uncivilized…

We ate our chicken and dumplings and my craving is satisfied, especially since there is enough for 3 or 4 more meals! I got to work on embroidery patterns and Tempus took off for Newport to grab a couple of things at the grocery and then go bag papers.

By then the wind was kicking up and the wind chime was going steadily. The wind was clipping along in the 20’s by the water and nearly that in town and we were almost to an inch of rain and got up to 1.1 by midnight. There was an 86mph gust in Newport…. By 3:30 we were already well over 6 tenths of an inch of rain! …and that’s when I got picked up.

There was a lot of debris on the roads, mostly small, but one branch was a size that would make small bowls if it hadn’t already gotten smashed. Otherwise it was wet, windy and warm. It didn’t bother either of us to have the window open, where last week we’d have to crank up the heat, although when we turned into the wind I was getting rain-splattered on the *passenger* side! It was coming up on high tide when we did the run, but there was a lot of extra water in the tributaries. Lint Slough, that normally is about 1/2 marsh plants, was a solid sheet of water, and the church property across from Eckman Lake was underwater at the edges. Even in a couple of the campgrounds out rt. 34, the spots that were dry camping during the summer, were soggy down by the river, whether they were actually underwater or not! We got in at 5:30, but Tempus had to go out already to re-deliver papers that had blown away or were unfindable. He has one more yet to do, someone who just called a little bit ago.

I want to test my “apothecary chest” that got dropped off yesterday morning. If my suspicion is correct, my spice jars will exactly fit it, and that solves the problem of those bailing off the shelves, the way they’ve been. I have to work on newsletters. The Quote file needs to be refilled and I need to check the others. After that I have some beads to work on, sorting and getting them and supplies put away so that I have room to start making tarot earrings again.

Ken Gagne oystercatchers in Yachats from 01/16/16

The local larkspurs, delphinium trollifolium, and delphinium pavonaceum (which the Wiki article says is confined to the Valley, but I’ve collected out here….) are pretty flowers in shade of white, blue and purple. They’re called delphiniums after the shape of the nectary. More here:  http://en.wikipedia.org/wiki/Delphinium_trolliifolium and here:  http://en.wikipedia.org/wiki/Delphinium_pavonaceum Other names are Larksheal and Staggerweed – Feminine, Venus, Water – The flowers frighten away venomous creatures and ghosts. Sprinkle between your eyes and a Litha fire to keep your sight clear. Use in rituals to call upon Dolphin energy.

Today is the feast day of Hera, queen of the gods of Olympus and wife of Zeus. Her worship probably derives from the earlier forms of the Great Goddess and her name quite possibly is the female form of the word “hero”. Her symbols were peacocks, pomegranates and poppy. More here:http://www.wilsonsalmanac.com/book/jan18.html and here: http://en.wikipedia.org/wiki/Hera

The shop opens at 11am! Winter Hours are 11am-5pm Thursday through Monday, although we’re there a lot later most nights. Need something off hours? Give us a call at 541-563-7154 or Facebook or email at ancientlight@peak.org If we’re supposed to be closed, but it looks like we’re there, try the door. If it’s open, the shop’s open! In case of bad weather, check here at the blog for updates, on our Facebook as Ancient Light, or call the shop.

Waning Moon Magick – From the Full Moon to the New is a time for study, meditation, and magic designed to banish harmful energies and habits, for ridding oneself of addictions, illness or negativity. Remember: what goes up must come down. Phase ends at the Tide Change on 1/27 at 4:07pm. Waning Gibbous Moon – Best time for draining the energy behind illness, habits or addictions. Magicks of this sort, started now, should be ended before the phase change to the New Moon. – Associated God/dess: Hera/Hero, Cybele, Zeus the Conqueror, Mars/Martius, Anansi, Prometheus. Phase ends at the Quarter on 1/19 at 2:13pm.

Early risers: look out your south window for the Moon passing the Jupiter-Spica pair in early dawn. The Moon, nearly last-quarter, rises around midnight tonight in the company of Jupiter and Spica; they’re only a few degrees apart. By the beginning of dawn on Thursday morning the 19th, the bunch of three is standing in proud view high near the meridian, as shown at right.

Mars (magnitude +1.0) is the fainter “star” upper left of Venus. The separation between them shrinks from 8° to 7° this week. In a telescope Mars is just a tiny fuzzblob 5 arcseconds in diameter.

Affirmation/Thought for the Day – Gardening Rule: When weeding, the best way to make sure you are removing weed and not a valuable plant is to pull on it. If it comes out of the ground easily, it is a valuable plant.

Journal Prompt – What do you think? – Do you think a school is the only place you can get an education? Explain your answer.

~  Expect more than others think possible. – Howard Schultz
~  Failure is simply feedback. – Kerr Cuhulain
~  A taxpayer is someone who works for the federal government but who doesn’t have to take a  civil service exam. – Ronald Reagan
~  Courage is rightly esteemed the first of human qualities. W. Churchill

Otherwise
I got out of bed
on two strong legs.
It might have been
otherwise. I ate
cereal, sweet
milk, ripe, flawless
peach. It might
have been otherwise.
I took the dog uphill
to the birch wood.
All morning I did
the work I love.

A Brighid’s Cross can be made with wheat stalks, grasses, reeds or rushes. Gather a few dozen reeds of the same length. If they tend to break when you bend them, soak them in water to soften them, so that they will bend easily.

These crosses were exchanged as symbols of protection in ancient times. Let the children hand these Brighid’s Crosses out to guests at any ritual you attend or host. 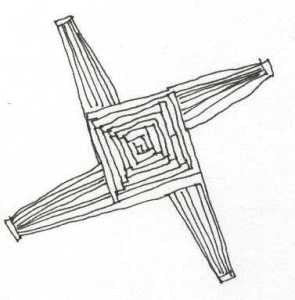 The preacher just finished his sermon for the day and proceeded toward the back of the church for his usual greetings and handshaking as the congregation left the church. After shaking a few adult hands he came upon the seven year old son of one of the Deacons of the church.

“Good morning, Jonathan,” the preacher said as he reached out to shake Jonathan’s hand.

As he was doing do he felt something in the palm of Jonathan’s hand. “What’s this?” the preacher asked.

“Money,” said Jonathan with a big smile on his face, “It’s for you!”

“I don’t want to take your money, Jonathan,” the preacher answered.

“I want you to have it,” said Jonathan. After a short pause Jonathan continued, “My daddy says you’re the poorest preacher we ever had and I want to help you.”