It’s raining off and on. Yesterday turned lovely for the afternoon into the evening, but the rain moved back in overnight and everything is dripping. While I was out harvesting this morning, nothing was falling out of the sky, just all over the trees and bushes, but when we got into the car we had to use the wipers. It’s 58 and 90% humidity and very little wind. We should be back to clear weather on Monday, again. …and the rain has eased off and it’s brightening, so I’m going to call it “partly cloudy” and hope. 🙂

Yesterday just went…. some days are like that. I was tired and so not paying attention to anything other than slogging through the day. Tempus went home early in the afternoon to help Jeanne with some sorting tasks on her stuff. He’s good at lifting and putting. 🙂

Other than that, not much other than the car is acting up again. <sigh>

Today we scrambled into our clothes and hurried out to get some of the harvesting done and then get down here so we could open on time. No one is here for Herbs, so I’m going to do that later, after Tempus gets back from talking to the car mechanic.

…and he’s back and it’s “misfiring”, so he has an appointment for next Friday. Well, we coulda told ’em that a month ago….

Photo by me from 9/16/14. This was taken in the Hackleman Old Growth Forest along Rt. 20 on the way to Sisters.

Meditrina was a Roman goddess who seems to have been a late Roman invention to account for the origin of Meditrinalia. The earliest account of associating the Meditrinalia with such a goddess was by 2nd century grammarian Sextus Pompeius Festus, on the basis of which she is asserted by modern sources to be the Roman goddess of health, longevity and wine, with an etymological meaning of “healer” suggested by some. This was pretty common in the late Roman Empire, where natural forces and celebrations were made into god/desses. Wikipedia says the Meditrinalia (in honor of the new wine and an obscure goddess of medicine) is on 10/11, but Nigel Pennick has it as today. http://en.wikipedia.org/wiki/Meditrinalia

Today’s Plant is Coltsfoot, Petasites frigidus var. palmatus. One of the best cough remedies out there, this is often smoked to help cases of chronic bronchitis and asthma. It is also made into cough syrups often combined with horehound. This is another plant where the medicinal and magickal uses seem to go together. Feminine, Venus, water – Add to love sachets and use in spell of peace and tranquility. The leaves, when smoked, can cause visions, and aid with breathing problems. .More here:http://en.wikipedia.org/wiki/Petasites_frigidus

The shop is open 11-7pm Thursday through Monday, although we’re there a lot later most nights. Need something off hours? Give us a call at 541-563-7154 or Facebook or email at ancientlight@peak.org If we’re supposed to be closed, but it looks like we’re there, try the door. If it’s open, the shop’s open! In case of bad weather, check here at the blog for updates, on our Facebook as Ancient Light, or call the shop.

Waxing Moon Magick – The waxing moon is for constructive magick, such as love, wealth, success, courage, friendship, luck or healthy, protection, divination. Any working that needs extra power, such as help finding a new job or healings for serious conditions, can be done now. Also, love, knowledge, legal undertakings, money and dreams. Phase ends at the Tide Change on 10/5 at 11:40am. Waxing Gibbous Moon – From seven to fourteen days after the new moon. For spells that need concentrated work over a ¼ moon cycle this is the best time for constructive workings. Aim to do the last working on the day of the Full moon, before the turn. Keywords for the Gibbous phase are: analyze, prepare, trust. It is the time in a cycle to process the results of the actions taken during the First Quarter. During this phase you are gathering information. Give up making judgments; it will only lead to worry. Your knowledge is incomplete. Laugh. Analyze and filter. LOOK WITHIN. God/dess aspect: Maiden/Youth, but in the uncommitted phase, the Warriors – Associated God/desses: Dion, Dionysius, Venus, Thor. Phase ends at the Full on 10/3 at 11:40pm.

<<<< Arcturus shines in the west these evenings, sinking as twilight fades out. Equally-bright 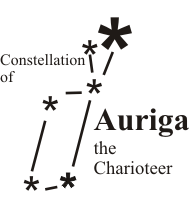 Capella >>>  is rising lower in the north-northeast, depending on your latitude. (The farther north you are the higher it will be.) They’re both magnitude 0, as bright as Vega high overhead. By mid- to late evening, Arcturus and Capella shine at identical heights. When will this happen? That depends on both your latitude and longitude.

When it happens, turn around and look low in the south-southeast (well to the lower left of the Moon). There will be 1st-magnitude Fomalhaut at the same height too — if you’re at latitude 43° north. Seen from south of that latitude, Fomalhaut will be higher than Capella and Arcturus. Seen from north of there, it will be lower.

Uranus (magnitude 5.7, in Pisces) and Neptune (magnitude 7.8, in Aquarius) are well up in the east and southeast, respectively, by mid- to late evening. Use our finder charts.

Runic half-month of Gebo/ Gyfu – Sept 28-Oct 12 – Gyfu represents the unity that a gift brings between the donor & recipient. It is a time of unification, both between members of society and between the human and divine. Nigel Pennick, The Pagan Book of Days, Destiny Books, Rochester, Vermont, USA, 1992, p. 102

Gort/Ivy, Sep 30 – Oct 27 – Gort – (GORT), ivy – Ivy (Hedera helix L.) is also a vine, growing to 30 m (100 feet) long in beech woods and around human habitations, where it is widely planted as a ground cover. Ivy produces greenish flowers before Samhain on short, vertical shrubby branches. The leaves of these flowering branches lack the characteristic lobes of the leaves of the rest of the plant. Like holly, ivy is evergreen, its dark green leaves striking in the bare forests of midwinter. Ivy is widely cultivated in North America. It is a member of the Ginseng family (Araliaceae).

Affirmation/Thought for the Day – I listen to my body.

Journal Prompt – What is? – What was your New Years Resolution this year?

~  Common sense is instinct. Enough of it is genius. – George Bernard Shaw
~  Don’t mistake activity with achievement. – John Wooden
~  Each breath is a gift each movement a present. – Ryan Biddulph
~  Failure is part of empowering yourself. You can’t empower yourself unless you strike out from the familiar into uncharted territory. Kerr Cuhulain

If you want to be a holy man, you’ve got to be committed. When you make a decision you cannot waver in any way. You’d never see Gandhi during a hunger strike sneaking into the kitchen in the middle of the night. ‘Gandhi…what are you doing down there?’ ‘Umm, I thought I heard a prowler…and I was going to hit him over the head with this big bowl of potato salad.’ -Jim Carrey

Symbolism: Third Harvest, wisdom of the Crone, death of the God, reflection on our place in the Wheel of the Year, New Year, reincarnation, the dark mysteries, Rebirth after Death.
Foods: beef, pork and other meat dishes, cakes for the dead (soul cakes), pumpkin dishes cranberry/pumpkin muffins and breads, squash, beets, turnips

Symbols – Jack-o’-Lantern, Balefire, Besom, Masks, The Cauldron, Waning Moon Jack-O-Lanterns, Altar decorations might include small jack-o-lanterns, foods from the harvest, and photographs of your loved ones who have departed from this world.

Traditional activities: Common Ritual practice calls for each Wiccan to write down his/her weaknesses on a piece of paper or parchment and toss it into the Cauldron fire divination, drying winter herbs, feasting and partying to defy the coming darkness (bob for apples, roast nuts, pop popcorn), Witches’ Ball. Spirit Contact, Meditation,

Silliness – The Elephant and the Turtle

An elephant was drinking out of a river one day, when he spotted a turtle asleep on a log. So, he ambled on over and kicked it clear across the river.
“What did you do that for?” Asked a passing giraffe.
“Because I recognized it as the same turtle that took a nip out of my trunk 53 years ago.”
“Wow, what a memory” commented the giraffe.
“Yes,” said the elephant, “turtle recall”.