I woke to rain drumming the sunroom roof. Down on the beaches the wind is running in the upper 20’s but it’s around 8, here, with gusts into the upper teens. We’ve gotten nearly 2/3 of an inch of rain today and it’s supposed to keep going into the night!

Yesterday started slowly, but Tempus had to run down to the shop fairly early to get the non-working phone situation fixed. I curled up with my sewing and embroidery for a few hours and got a few chores done in between.

They got the phone taken care of and then he came back after stopping at the PO to see whether my package had arrived. It hadn’t, so we had to run up to Lincoln City (which I tried to avoid by ordering something online that hasn’t arrived in a month!) So, I got my fabrics and we headed back, stopping at McD’s for some supper that we ate on the way.

Once we were at the shop I was working on an embroidery design and he ran around trying to do some more sorting and cleaning. The papers were running late so he didn’t leave until past 10 and agreed to phone me instead of posting on Facebook. So the first call for him bagging papers was at quarter to 11…. Oi! He was on the road around 12:15, though.

So I got the embroidery started and kept pecking and pecking at it. I stopped around 1am for a snack and then went back to it.

He picked me up at nearly 4am. It was awfully cold, although there wasn’t a lot of rain. I saw a deer standing in the ditch at one point, looking at us with glowing eyes, and what may have been a fox at another point, plus all the usual cats. We got barked at by dogs and crowed at by a rooster when we were out at the spring.

We got home a bit past 7 and fell into bed and here it’s 5:30 and I’m just waking up! I don’t know what Tempus has been up to, but he may have slept as long as I did. Well, we have chores and I have more embroidery to work on today.

Today’s plant is the snowdrop, Galanthus. It was called that in Gerard’s Great Herbal in 1633. The derivation of the name is uncertain, although it may have come from the German word Schneetropfen, which was a type of earring popular around that time. Other British traditional common names include “February fairmaids”, “dingle-dangle”, “Candlemas bells”, “Mary’s tapers” and, in parts of Yorkshire,” snow piercers” (like the French name perce-neige). It is used in spells for making you think and for sorting out problems, also to chase the negative effects of sorrow and grief.  http://en.wikipedia.org/wiki/Snowdrop

On 2/28/53 the final link in how DNA works was found by Francis Crick and Jim Watson. The two men finally figured out how the base pairs linked up. A letter by Crick to his son Michael was found recently and was auctioned by Christie’s, http://www.nytimes.com/2013/02/26/science/a-dna-lesson-from-the-pen-of-francis-crick.html?ref=science&_r=1& More on DNA itself here: http://en.wikipedia.org/wiki/DNA

The shop is open 11-5pm Thursday through Monday, although we’re there a lot later most nights and we won’t officially close later until Spring Break. Need something off hours? Give us a call at 541-563-7154 or Facebook or email at ancientlight@peak.org If we’re supposed to be closed, but it looks like we’re there, try the door. If it’s open, the shop’s open! In case of bad weather, check here at the blog for updates, on our Facebook as Ancient Light, or call the shop.

Waxing Moon Magick – The waxing moon is for constructive magick, such as love, wealth, success, courage, friendship, luck or healthy, protection, divination. Any working that needs extra power, such as help finding a new job or healings for serious conditions, can be done now. Also, love, knowledge, legal undertakings, money and dreams. Phase ends at the Tide Change on 3/1 at 4:51pm. Waxing Gibbous Moon – From seven to fourteen days after the new moon. For spells that need concentrated work over a ¼ moon cycle this is the best time for constructive workings. Aim to do the last working on the day of the Full moon, before the turn. Keywords for the Gibbous phase are: analyze, prepare, trust. It is the time in a cycle to process the results of the actions taken during the First Quarter. During this phase you are gathering information. Give up making judgments; it will only lead to worry. Your knowledge is incomplete. Laugh. Analyze and filter. LOOK WITHIN. God/dess aspect: Maiden/Youth, but in the uncommitted phase, the Warriors – Associated God/desses: Dion, Dionysius, Venus, Thor. Phase ends at the Full on 2/28 at 4:51am. Full Moon – The day of the day before and day after the true Full Moon. “And better it be when the moon is full!”! Prime time for rituals for prophecy, for spells to come to fruition, infusing health and wholeness, etc. A good time for invoking deity. FRUITION Manifesting goals, nurturing, passion, healing, strength, power. Workings on this day are for protection, divination. “extra power”, job hunting, healing serious conditions Also, love, knowledge, legal undertakings, money and dreams. God/dess Aspect: Mother/Abundance/Kingship – – Associated God/desses: Danu, Cerridwen, Gaia, Aphrodite, Isis, Jupiter, Amon-Ra. Phase ends on 3/3 at 4:51am. 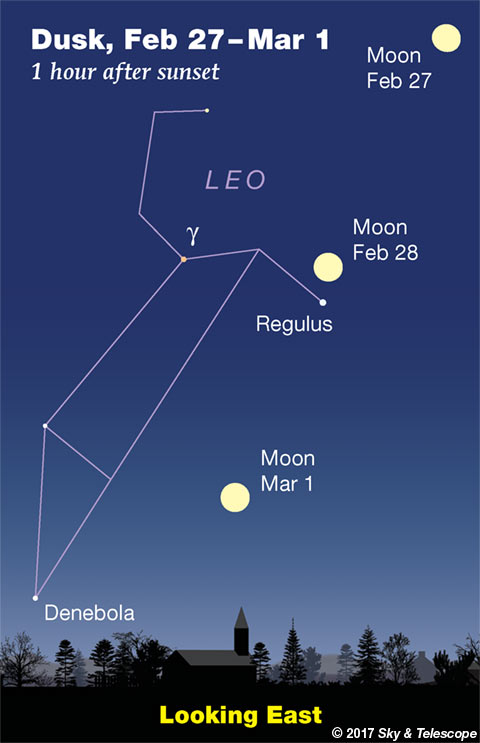 During the night of the 28th, watch the just-short-of-full Moon creep up on Regulus. As always, the moon symbols here are drawn three times the Moon’s actual apparent size. Their centers are plotted exact for latitude 40° N, longitude 90° W, near the population center of North America. Follow the almost-full Moon as it begins the night by leading Regulus upward. Watch as the gap between them decreases hour by hour. The Moon’s very thin dark limb will then occult Regulus for much of Maine and northeastern Canada; map and timetables.

Jupiter (magnitude –2.2, in Libra) rises around midnight to shine as the brightest point in the early-morning sky. Jupiter poses for telescopes highest in the south shortly before the beginning of dawn.

Runic half-month of Teiwaz/Tyr, 2/27-3/13 This is a time of positive regulation, sacrifice and hard work in order to progress.

Affirmation/Thought for the Day – Take your shoes off and go barefoot.

Journal Prompt – What does this quote say to you? – A failure is a man who has blundered but is not able to cash in the experience. – Elbert Hubbard

~  Energy and persistence conquer all things. – Benjamin Franklin
~  Every day we must keep this world- this WHOLE WORLD, in our hearts! That means we must work to keep our hearts big enough, every day. – Bif Naked
~  Faith is love taking the form of aspiration. – William Ellery Channing
~  Honesty is the best image. – Tom Wilson

When we were young children, most of us enjoyed participating in Easter Egg hunts. The universe is an immense Easter Egg Hunt, its mysteries the eggs, and the scientists and magicians are the ones amongst us who refused to grow up. – Tempus Beans Bartlett

Bring the water to a boil and and stir in the oats.  Set aside for 1 hour.  Spray two 9 x 5 x 3 inch loaf pans with vegetable oil spray.

Dissolve the yeast in the warm water and allow to stand for 5 minutes.  Stir the yeast mixture into the oat mixture.  Blend in both flours, stirring until the dough pulls cleanly away from the sides of the bowl.  Form the dough into a ball and place in a greased bowl, turning to coat.  Cover loosely with plastic wrap and let rise in a warm place for 1 hour or until doubled in size.  Punch down the dough.  Knead until smooth and elastic.  Divide into two loaves and place in the prepared pans.  Cover and let rise again until doubled in size.

Preheat the oven to 350*.  Bake until golden brown, about 45-50 mins.  It if appears that breat is browning too quickly, cover with foil the last 10-15 mins of baking time.  Remove bread from pans and cool on a wire rack.

*I think this would make delicious french toast too

Lemon Surprise Bread http://everythingunderthemoon.net/forum/ostara-feast-recipes-t22403.html
Prep Time: 20 minutes
Cook Time: 45 minutes
Total Time: 1 hour, 5 minutesIngredients:
•1 package Lemon Poppy Seed Bread mix
•Ingredients to prepare mix as directed
•1/2 C golden raisins
•1 Tbsp orange zest
•1/2 C dried cranberries
•Non-meltable goodies to add into the bread, such as:
•A shiny coin
•A piece of gold or silver jewelry
•A ring
•A polished crystal (make it large enough to find! )
•Vanilla ice cream
Preparation:
Prepare the bread mix as directed. Once it’s all mixed together, add in the golden raisins, the orange zest, and the cranberries. Finally, fold in a few small treasures, such as a ring, a cleaned coin, or a polished crystal. Be sure you select items that won’t melt when you bake it in the oven!

Bake as directed on the package, and then remove from oven. Allow to cool. To serve, slice off pieces, keeping an eye out for the hidden treasures. Top each slice off with a scoop of vanilla ice cream.

Silliness – Think About It – If the police arrest a mime, do they tell him he has the right to remain silent?