It looks like after today, we’re back to rain. It’s cloudy out there, but bright, no sun coming through. 62F (wow!) and no wind, but for the occasional gust. We seem to be the warmest around the area. Most of the temps are in the upper 50’s. We’re going to open things up and air out the apartment!

We didn’t push, yesterday, sleeping fairly late and getting about 2/3 of the chores done. Laundry and dishes were first, then Tempus headed out to run an errand. Apparently the john at the shop ran for long enough to give us a whacking great water bill. <sigh> While he was out I finally got my earrings sorted out, on the hanger and the hanger hung up. I did some picking up and putting back. How does so much end up out of place? After that I did a little sewing and started some embroidery. Once he was back we had sandwiches and I went out to work in the garden while he got the trash out.

Around 7pm we got to the shop and I pulled out the books that are going out for sale that I’ve been reading at home, and other things to re-stock supplies with. Tempus went into the back to get me some space to work on herbs, since there’s a bunch of sorting that will free up some storage space. 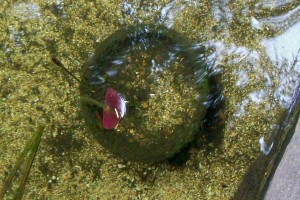 I’m getting started on Pan-Pagan, inviting teachers and updating pages. There’s been some brain-storming, but not much else this winter.

Tempus called from the grocery store with some questions and then again when he started bagging at 10:15. By then I had finished the tvarog and separated the pickled eggs, with which ones were going to the event. I got my lists done and sent out a bunch of questions and then sat down to work on embroidery designs.

He finished South Beach/Makai by 1:45, the Beaver Creek/Bayview loop at 2:25 and he stopped by the shop to drop off the groceries. He picked me up at around 3:30 and we had a good, quiet run. It was cloudy, but the skyglow from the moon behind the clouds was lovely, and the reflections on lake, river and bay kept making me exclaim. WE finished up a couple of minutes after 6, came home and went splat.

I’m waiting for coffee. I need to get some plants moved around today so that we can get at things again. I have to get my clean stuff put away, but other than that I think I’m going to sit and embroider!

An old version of a witch costume. I think this is the Queen of the Night from Mozart’s opera but I can’t find it on the web, anymore, except as “Witch Costume ca. 1855”.

Today’s plant is Blue Elderberry, Sambucus cerulea. It’s a rather wild shrub that can be trained into a small tree, with icky-smelling white flowers that then produce dark fruits that appear blue because of a whitish coating on them. In Oregon it grows mostly from the valley out to the coast with some isolated pockets in the Eastern part of the state. There’s a lot of folklore surrounding the tree. “In some areas, the “elder tree” was supposed to ward off evil influence and give protection from witches, while other beliefs say that witches often congregate under the plant, especially when it is full of fruit. In some regions, superstition, religious belief, or tradition prohibits the cutting of certain trees for bonfires, most notably in witchcraft customs the elderberry tree; “Elder be ye Lady’s tree, burn it not or cursed ye’ll be” – A rhyme from the Wiccan rede [poem]. If an elder tree was cut down, a spirit known as the Elder Mother would be released and take her revenge. The tree could only safely be cut while chanting a rhyme to the Elder Mother.” From Wikipedia – Feminine, Venus, Water – The flowers are used for Crossing the Bridge rituals. Carry for protection and to prevent rheumatism and toothache. Dried berries are helpful in sleep pillows. All parts are good for protection. Grow near the home for prosperity. Magic wands and flutes are often made from this wood.  http://en.wikipedia.org/wiki/Sambucus_ceruleaorhttp://en.wikipedia.org/wiki/Sambucus

Today’s Feast is the first mention of Moskva (Moscow, short for Grad Moskva, “big city on the Moscow River”) in history The first reference to Moscow dates from 1147 when Yuri Dolgorukiy called upon the prince of the Novgorod-Severski to “come to me, brother, to Moscow”. It’s the largest city in Russia, about the 6th largest in the world. It’s been burned to the ground several times (once by its own populace in the Napoleonic Wars). The kreml (Kremlin) was built as a wooden stockade about 7 years after the first mention and has grown to a huge complex of palaces and government buildings. Almost 20% of the population of Moskva, calls itself, “Spiritual, but not religious” and about 1% are Rodnoveri, the pagan faith “ancestral faith”.  http://en.wikipedia.org/wiki/Moscow

The shop is open 11-6pm Thursday through Monday, although we’re there a lot later most nights. (Spring Hours) Need something off hours? Give us a call at 541-563-7154 or Facebook or email at ancientlight@peak.org If we’re supposed to be closed, but it looks like we’re there, try the door. If it’s open, the shop’s open! In case of bad weather, check here at the blog for updates, on our Facebook as Ancient Light, or call the shop.

Waning Moon Magick – From the Full Moon to the New is a time for study, meditation, and magic designed to banish harmful energies and habits, for ridding oneself of addictions, illness or negativity. Remember: what goes up must come down. Phase ends at the Tide Change on 4/15 at 6:57pm. Waning Gibbous Moon – Best time for draining the energy behind illness, habits or addictions. Magicks of this sort, started now, should be ended before the phase change to the New Moon. – Associated God/dess: Hera/Hero, Cybele, Zeus the Conqueror, Mars/Martius, Anansi, Prometheus. Phase ends at the Quarter on 4/8 at 12:18am.

The waning Moon passes Mars and Saturn in early dawn. The Moon, as always, is drawn three times its actual apparent size. And it’s always positioned for an observer near the middle of North America (exact for latitude 40° N, longitude 90° W).

High above the Big Dipper late these evenings, nearly crossing the zenith for mid-northern skywatchers, are three pairs of dim naked-eye stars, all 3rd or 4th magnitude, marking the Great Bear’s feet. They’re also known as the Three Leaps of the Gazelle, from early Arab lore. They form a long line roughly midway between the Bowl of the Big Dipper and the Sickle of Leo. According to Arab lore, the gazelle was drinking at a pond — the big, dim Coma Berenices star cluster — and dashed away when startled by a flick of Leo’s nearby tail, Denebola. Leo, however, seems quite unaware, facing the other direction.

Although the calendar may say it is spring, the so-called Winter Hexagon remains prominent on April evenings. One of the sky’s largest asterisms — a recognizable pattern of stars separate from a constellation’s form — the hexagon stands out in the western sky after darkness falls. To trace the asterism, start with southern Orion’s luminary, Rigel. From there, the hexagon makes a clockwise loop. The second stop is brilliant Sirius in Canis Major. Next, pick up Procyon in the faint constellation Canis Minor, then the twins Castor and Pollux in Gemini, followed by Capella in Auriga, Aldebaran in Taurus, and finally back to Rigel.

summer. It’s now slightly brighter than Saturn (they’re about magnitude +0.2 and +0.5, respectively), and their color difference is obvious. And before the first glimmer of dawn early this week, use binoculars to find the hazy globular star cluster M22 even closer to Mars than Saturn is. It’s 5th magnitude.

Runic half-month of Ehwaz, 3/30-4/13 – Ehwaz, the horse; time of partnership between humans and Nature, as between rider and horse. Nigel Pennick, The Pagan Book of Days, Destiny Books, Rochester, Vermont, USA, 1992, p. 55

Affirmation/Thought for the Day – I took a train today to see if I could get away from me, no matter how far or fast I sped I found myself one step ahead.

~  As I live and am a man, this is an unexaggerated tale – my dreams become the substances of my life.  – Samuel Taylor Coleridge (1772-1834) English writer
~  At first, dreams seem impossible, then improbable, and eventually inevitable. – Christopher Reeve
~  Be a yardstick of quality. Some people aren’t used to an environment where excellence is expected. – Steve Jobs
~  Do not think of winning. Think, rather, of not losing. – Ginchin Funakoshi

Buds are bursting in the hedges,
Leaves are creeping up the lane,
Everywhere the sap is stirring
Love awakens to life again. – John Dennis (1658–1734)

Mix the following essential oils in 2 tablespoons of almond or other light weight odorless oil:

When mixing oils, use either almond oil or any other colourless lightweight oil.
5 drops Rose
2 drop Lavendar
4 drops Jasmine

When mixing oils, use either almond oil or any other colourless lightweight oil.
Wear to rituals or use to anoint candles.
Recipe:
5 drops Patchouli
5 drops Cypress

Did you hear about the guy who went to the dentist to get new dentures?
His insurance was denied and he only had a dollar on him… so he wound up with buck teeth.