The sky to the north and northwest is a milky blue, but most of the rest has cloud. Over town it’s thin, barely straining the sun, but south and over the Coast Range there are several layers, the lowest of which is likely lifted fog. 59F. Wind at 1mph, lowest clouds at 500 feet, and the marine layer has barely pulled back, but there’s sunshine! The chance of rain next Sun.-Tues. has inched higher, too. It’s getting close to 60 percent.

Yesterday’s morning class went well. We finished the history section of 101 and got well into Lesson 2. Tempus took them back to the Center at about 12:45.

It seemed as though the afternoon vanished. We didn’t have a lot of customers and I took a nap, then had lunch and fell asleep over it again. Eventually I was up and did a bit of sewing, then made some earrings. Other than that not as much got done as should have.

I finally worked on some inventory stuff and that took me through suppertime and up to 9:30 or 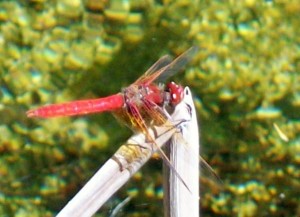 so. We had some chores to do when we got home and then slept hard.

Tempus is going to take some things to storage today and hopefully clear the main aisle of the extras. We’re starting to shift some of the things that we don’t us at the apartment to storage. Still no idea on where we’re going to live.

A Ken Gagne photo of a peahen and chicks from 7/16/15 from a farm up the Yachats River. 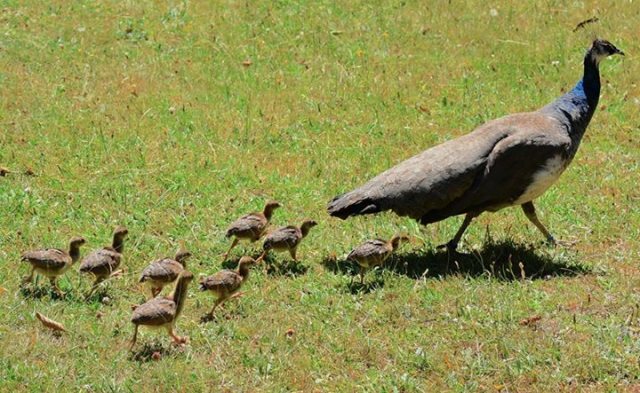 Today’s Feast is National Sleepyhead Day in Finland. That made me giggle. The tradition is that the last person to wake gets water thrown on them. More recently there’s a tradition to dunk a celebrity in the ocean. 🙂 http://en.wikipedia.org/wiki/National_Sleepy_Head_Day

It doesn’t grow well out here on the coast, although supposedly there are some specimens. I’ve never seen one out here, but they’re *all* over the Willamette Valley, many of them hosting our local mistletoe, Phoradendron flavescens. This is the same relation of tree and herb that gave rise to the legends of the Golden Bough in Europe, although these are *far* different species. – Masculine, Sun ,Fire, Dagda, (Jupiter, Thor, Pan) Use in magicks for protection, money, potency, fertility – Burn the bark to draw off illness, carry and piece of the for luck and protection, acorns are used to tip male power wands and worn as necklaces by some priests and can be carried to increase fertility and male potency to preserve health and long life. Place in windows to ward off lightning. Plant an acorn at the new moon if you need money. Fires of oak wood draw off illness. – Wiccaning or Seining –Wiccaning or Seining is the ceremony where we welcome a new child to the world. Holly water is used for girls and Oak for boys. Make by a tablespoon of powdered leaf brew in 1 cup of very hot water for about 10 minutes, then adding that to 2 cups of cold water.  Sprinkle or wash baby with it, then rinse well. More here:  http://en.wikipedia.org/wiki/Oregon_white_oak Mistletoe lore here:  http://en.wikipedia.org/wiki/Mistletoe#Culture.2C_folklore.2C_and_mythology   and more about our variety here:http://en.wikipedia.org/wiki/Phoradendron

The shop opens at 11am. Summer hours are 11am-7pm Thursday through Monday. Need something off hours? Give us a call at 541-563-7154 or Facebook or email at ancientlight@peak.org If we’re supposed to be closed, but it looks like we’re there, try the door. If it’s open, the shop’s open! In case of bad weather, check here at the blog for updates, on our Facebook as Ancient Light, or call the shop.

Waning Moon Magick – From the Full Moon to the New is a time for study, meditation, and magic designed to banish harmful energies and habits, for ridding oneself of addictions, illness or negativity. Remember: what goes up must come down. Phase ends at the Tide Change on 8/11 at 2:58am. Waning Gibbous Moon – Best time for draining the energy behind illness, habits or addictions. Magicks of this sort, started now, should be ended before the phase change to the New Moon. – Associated God/dess: Hera/Hero, Cybele, Zeus the Conqueror, Mars/Martius, Anansi, Prometheus. Phase ends at the Quarter on 8/4 at11:18am.

Although Mars appeared slightly larger during its opposition in August 2003, Mars in 2018 will still be stunning sight, especially when compared to its worst opposition, which will take place in March 2832. – Astronomy: Roen Kelly 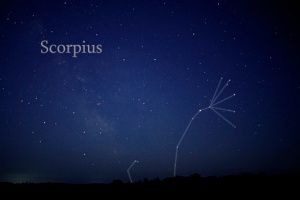 The tail of Scorpius is low due south right after dark, well to the lower right of

Saturn. How low it is depends on how far north or south you live: the farther south, the higher. Look for the two stars especially close together in the tail. These are Lambda and fainter Upsilon Scorpii, known as the Cat’s Eyes. They’re canted at an angle; the cat is tilting his head and winking. The Cat’s Eyes point west (right) by nearly a fist-width toward Mu Scorpii, a much tighter pair known as the Little Cat’s Eyes. They’re oriented almost exactly the same way as the big Cat’s Eyes. Can you resolve the Mu pair without using binoculars? 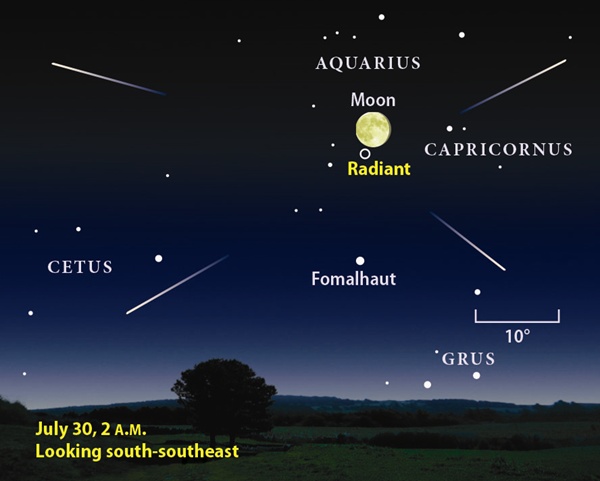 During the peak of the Southern Delta Aquariid meteor shower on July 30, observers can witness up to 25 meteors per hour appearing to come from the constellation Aquarius the Water-bearer, though a concurrent Full Moon may lessen the view. The Southern Delta Aquariid meteor shower peaks this morning. The nearly Full Moon remains in the sky all night, however, cutting the number of meteors visible significantly. Still, it’s worth keeping an eye out for the brightest “shooting stars.” All of the shower meteors appear to radiate from a point in the constellation Aquarius the Water-bearer.

Mercury is hidden in the glare of the Sun.

Runic half-month of Thurisaz/ Thorn/Thunor, 7/29-8/12 – Northern Tradition honors the god known to the Anglo-Saxons as Thunor and to the Norse as Thor. The time of Thorn is one of ascendant powers and orderliness. This day also honors the sainted Norwegian king, Olaf, slain around Lammas Day. Its traditional calendar symbol is an axe.

Celtic Tree Month of Tinne/Holly, Jul 8 – Aug 4, Tinne (CHIN-yuh), holly – The holly (Ilex aquifolium L.) is a shrub growing to 10 m (35 feet) in open woodlands and along clearings in forests. Hollies are evergreen, and stand out in winter among the bare branches of the deciduous forest trees that surround them. Hollies form red berries before Samhain which last until the birds finish eating them, often after Imbolc. The typical “holly leaf” is found on smaller plants, but toward the tops of taller plants the leaves have fewer spiny teeth. Hollies are members of the Holly family (Aquifoliaceae). The common holly is often cultivated in North America, as are hybrids between it and Asiatic holly species.
Graves (1966) and others are of the opinion that the original tinne was not the holly, but rather the holm oak, or holly oak (Quercus ilex L.). This is an evergreen oak of southern Europe that grows as a shrub, or as a tree to 25 m (80 feet). Like the holly, the holm oak has spiny-edged leaves on young growth. It does not have red berries, but it does have red leaf “galls” caused by the kermes scale insect; these are the source of natural scarlet dye. Holm oaks are occasionally cultivated in North America.

Affirmation/Thought for the Day – Great ideas need landing gear as well as wings.

Journal Prompt – Auto-Biographical narrative – Tell about a characteristic in others you admire?

~  The worst form of inequality is to try to make unequal things equal. – Aristotle
~  The modern Knight’s quest is to find himself. – Kerr Cuhulain
~  We have flown the air like birds and swum the sea like fishes, but have yet to learn the simple act of walking the earth like brothers. – Martin Luther King Jr.
~  Creativity is a natural extension of our enthusiasm. – Earl Nightingale

I hear the red fox barking
On the moonlit hill,
And bullfrogs by the river
Where the reeds stand still.

All the night has voices.
But sometimes, suddenly,
It grows so quiet I know the world
Is listening with me. – Benjamin Rice (1903–78)

In some parts of Ireland, the Feast of Lughnasadh came to be called Colcannon Sunday, after a dish made from the first digging of potatoes. The cook put on a special white apron kept for the occasion, boiled a huge pot of potatoes over the fire, and mashed them with a wooden mallet. Often, they were seasoned with onions, garlic or cabbage. The cooked vegetables were then turned out onto a platter, and a well hollowed out in the middle for plenty of butter and hot milk. The family sat round and ate, while the cook ate hers from the pot itself—a special privilege. In more well-to-do households, the meal would be accompanied by meat: a flitch of bacon, newly-slaughtered sheep or roast chicken, and followed by seasonal fruits such as gooseberries and blackcurrants.

It was thought to be unlucky not to eat Colcannon on this day, so people often made sure to share theirs with less fortunate neighbors.

Here’s a more modern recipe for you to try.

Boxty – http://www.chalicecentre.net/lughnasadh.htm  – If you have mashed potatoes left over, you can turn them into another traditional Irish dish.

In large bowl mix together mashed potatoes and 2 tablespoons butter. Stir in eggs and grated potatoes, then the flour, baking powder, salt, caraway seeds and pepper. Blend in milk. Heat 1 tablespoon butter to sizzling in large nonstick skillet. Drop potato mixture, about 2 1/2 tablespoons at a time, into skillet to form pa tties. Flatten slightly. Fry over medium-high heat until crisp and browned, turning once. Repeat with remaining potato mixture, adding butter to skillet as needed.Serve hot. 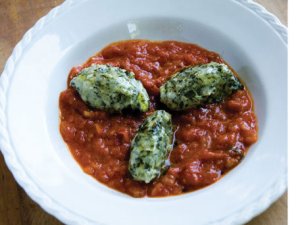 Gnudi means, well, “nude” – because these are nude ravioli, the filling without the outer pasta covering. They are delicious served with tomato sauce, as in this recipe, or with melted butter and sage.

Traditional deviled eggs are made even more special with the addition of sausage and cheese. (Recipe modified from http://www.landolakes.com/recipe/3830/good-morning-deviled-eggs?utm_source=facebook&utm_medium=socialmedia&utm_content=wallpost_6.30.13_1&utm_campaign=recipe

Directions
* Cut eggs in half
* Place yolks in bowl
* mash.
* Add all remaining eggs ingredients; mix well.
* Fill egg whites with yolk mixture.
* Cover; refrigerate until serving time or up to 24 hours.
* Top with American and green onions before serving, if desired.