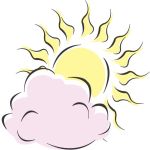 I actually saw Venus for about 20 seconds in a break in the clouds. The overcast has been pretty solid, but it’s getting tattered. 49F, wind at 5, gusting to 10mph, AQI 20. We got a full inch of rain yesterday, but it’s been dry since midnight. The weather could be interesting on Thursday and it’s likely to be wet over the weekend.

A kidlet with a vanocka (christmas braided bread) almost bigger than he is! by Vilem Kropp in 1950

Tempus and I were both draggy early yesterday….early for folks who’d been up until 5 with the storm, at least. Tempus fought the computer, trying to do an online change on the car title and then his drivers’. I got a shopping list together and he headed for Newport. I had some of the Christmas cooking ingredients that were absent! I fielded a number of calls while he was up there, making sure he got the right stuff.

I was working on a Latin translation for awhile, then asked an expert, and while I was waiting for an answer got a bunch of shop paperwork done. I also started developing some more pictures. After those were done I wrote for quite awhile.

Tempus came back, dropped off the shopping, grabbed the laundry and headed back out. Eventually he was back, got some food, made his tea for the paper run and headed back out again. Busy…. He was starting the bulk drops at 11, which is about when I finished the new pages for the Mab’s Creations blog. By the time he had started on the regular route at 12:40, I had also done a blog post. I went to get a nap and woke a little late to catch him as he finished Makai, but he still wasn’t answering at 3:20. It turned out he was in a bad spot to pull over to answer…. I got picked up a bit after 4:30 and while we were slowed by debris, we were done well before 7.

Today we’re going to sleep in and then I have some cookery and then sewing to do. I’ve gotta get the Christmas nuts done, so we can get the boxes out. I’ve also got some really critical mending and hoping that I’m going to have the whole table before too much longer. 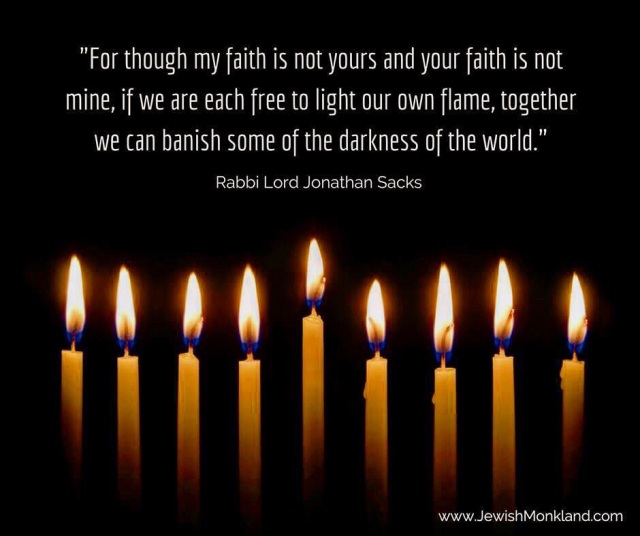 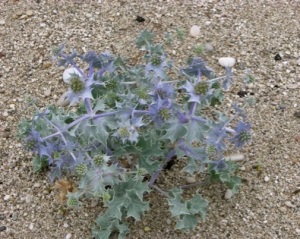 I’ve often heard people talk about “beach thistle”, but Sea Holly, Eryngium maritimum isn’t a thistle. It’s actually related to carrots. The young shoots can be blanched and eaten like asparagus and the roots (which can get up to 20 feet long!!!!) are peeled, boiled and cut, then braided and candied. Prepared that way they are a good cough and cold remedy. The roots can also be boiled or roasted as well and are very nutritious. It is native to Europe, but going extinct in certain areas. – Masculine, Fire, Venus – This plant is an aphrodisiac, pure and simple.

Iuventas is the Goddess of Youth, Roman mythology‘s version of the goddess Hebe of Greek mythology. A celebration was held for all the youth who had come of age (14 years old) in the preceding year. Boys offered a coin to her when they wore a man’s toga for the first time. The temple of Juventas on the Capitol was more ancient than that of Jupiter. She also had a second temple in the Circus Maximus. More here:  http://en.wikipedia.org/wiki/Juventas

Waxing Moon Magick – The waxing moon is for constructive magick, such as love, wealth, success, courage, friendship, luck or healthy, protection, divination. Any working that needs extra power, such as help finding a new job or healings for serious conditions, can be done now. Also, love, knowledge, legal undertakings, money and dreams. Phase ends at the Tide Change on 12/22 at 9:49pm. Waxing Gibbous Moon – From seven to fourteen days after the new moon. For spells that need concentrated work over a ¼ moon cycle this is the best time for constructive workings. Aim to do the last working on the day of the Full moon, before the turn. Keywords for the Gibbous phase are: analyze, prepare, trust. It is the time in a cycle to process the results of the actions taken during the First Quarter. During this phase you are gathering information. Give up making judgments; it will only lead to worry. Your knowledge is incomplete. Laugh. Analyze and filter. LOOK WITHIN. God/dess aspect: Maiden/Youth, but in the uncommitted phase, the Warriors – Associated God/desses: Dion, Dionysius, Venus, Thor. Phase ends at the Full on 12/21 at 9:49am. 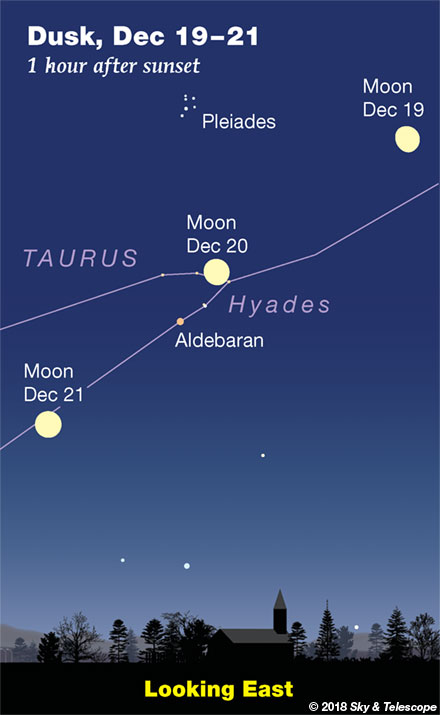 Every December, the Moon is nearly full when it crosses Taurus in the eastern evening sky.

The waxing gibbous Moon shines in the east this evening, with the Pleiades to its left and orange Aldebaran to its lower left. To the right of the Moon is orange Alpha Ceti, fainter at magnitude 2.5. At this fulsome phase the Moon displays all of sinuous Mare Frigoris, north of big round Mare Imbrium. Explore along its length with your telescope and Chuck Wood’s Exploring the Moon article, “Imbrium’s Eyebrow,” in the December Sky & Telescope, page 52. 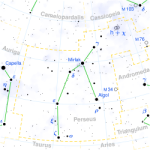 The variable star Algol in Perseus appears faintest at 2:47 a.m. EST tomorrow morning, when it shines at magnitude 3.4. Observers across North America should start watching it after darkness falls tonight if they want to witness its dramatic drop from peak brightness (magnitude 2.1). This eclipsing binary star runs through a cycle from minimum to maximum and back every 2.87 days, but the drop from peak brightness and subsequent rise lasts only about 10 hours. Algol appears in the east-northeast after sunset and passes nearly overhead around 9 p.m. local time.

Saturn (magnitude +0.5) has disappeared into the glow of sunset.

Runic half-month of Jera/ Jara 12/13-12/27 – Jara signifies the completion of natural cycles, such as fruition, and has a more transcendent meaning of mystic marriage of Earth and Cosmos. *Ø* Wilson’s Almanac free daily ezine | Book of Days | December 13

Celtic tree month of Ruis/Elder, Nov 25 – Dec 22 – Ruis – (RWEESH) – Like other Iron Age Europeans, the Celts were a polytheistic people prior to their conversion to (Celtic) Christianity. The Celts divided the year into 13 lunar cycles (months or moons). These were linked to specific sacred trees which gave each moon its name. Today commences the Celtic tree month of Elder. 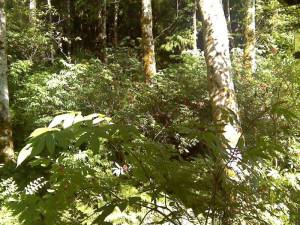 The common elder (Sambucus nigra L.) is a shrub growing to 10 m (33 feet) in damp clearings, along the edge of woods, and especially near habitations. Elders are grown for their blackish berries, which are used for preserves and wine. The leaf scars have the shape of a crescent moon. Elder branches have a broad spongy pith in their centers, much like the marrow of long bones, and an elder branch stripped of its bark is very bone-like. The red elder (S. racemosa L.) is a similar plant at higher elevations; it grows to 5 m (15 feet). 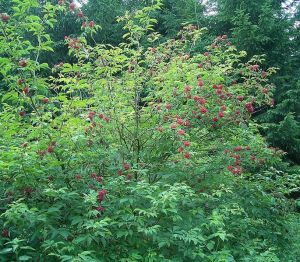 Red elder extends its native range to northern North America, and it is cultivated along with other native species, but common elders are seldom seen in cultivation. Elders are in the Honeysuckle family (Caprifoliaceae). 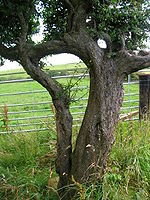 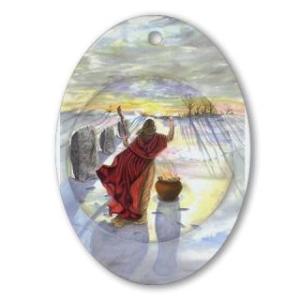 Secret of the Unhewn Stone, Dec 23 – (This is the blank day in this calendar, the one day of the year that is not ruled by a tree and its corresponding Ogham alphabet character. Its name denotes the quality of potential in all things.)

Graves (1966) makes a case for an additional “blank” ogham, “the unhewn dolmen arch”, which he assigns to the mistletoe, a plant for which there is abundant evidence of its ritual importance to the Celts. There are two common mistletoes in Europe, both of 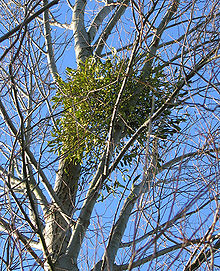 which live as parasites on trees. The common mistletoe (Viscum album L.) parasitizes many tree species, including oaks in the western part of its range. It forms white berries between Samhain and Yule. The yellow-berried mistletoe (Loranthus europaeus L.) does not extend to western Europe. It is found primarily on oaks. It is most likely the “golden bough”, being more common in the eastern Mediterranean than the common mistletoe. The common mistletoe has been cultivated in North American for the Yule trade, and there are several native mistletoes in the genus Phoradendron. Mistletoes are in the Mistletoe family (Viscaceae).

Affirmation/Thought for the Day – Live life to the fullest!

Journal Prompt – What is? – What was (will be) the first thing that you did(do) when you got your driver’s license?

~   He is happiest who finds peace in his home. – Goethe
~   How sad that you yourself veil the treasure that is yours. – Rumi
~   Always laugh when you can. It is cheap medicine. – Lord Byron
~   Let no man pull you low enough to hate him. – Martin Luther King, Jr., Paul’s Letter to American Christians

THE SOLSTICE CHILD – Lunaea Wetherstone  – Tune: What Child is This?

What child is this who brings such light
that all who see Her grow hopefull?
The Solstice candles, this darkest night,
rekindle a flame in our soul.
This, this is the Solstice child,
the Maiden brilliant, the Maiden wild.
Come, sisters, to hold Her near,
the hope and the light of the New Year.

What Child is this, who brings such light
That all who see Him grow hopeful
The Solstice candles, this darkest night
Rekindle a flame in our soul

This, this is the Solstice Child
The Sun God brilliant, the Sun God wild
Come, Pagans, to hold Him near
The hope and the light of the New Year

Yule is a Sabbat to welcome back the Sun King. The sun is vital to all that exists on Earth. It is the giver of light and warmth, and causes the rebirth of this past years crops by warming and gently coaxing the seeds that have been sleeping underground during the winter. Traditional methods of celebrating this Sabbat are mostly inside activities.

Children of all ages will delight in both making and giving these delightful center pieces.

Tell children about each special part of the centerpiece. Explain that the baskets were used during the harvests during the season before. The evergreen boughs are symbols of immortality, reminding us that the Sun King is not dead, but reappears at Yule each year to lengthen, brighten and warm the days ahead. The oranges and apples are symbols of the Sun King. The nuts symbolize the seeds as they lay sleeping and awaiting the Sun King’s return. The wheat stalks symbolize the yearly harvests and the flour represents the triumph of the forces of light and life.)

Silliness – Yule Riddles – Q: What does Frosty the Snowman take when he gets sick? A: A chill pill.