Featured photo by Ken Gagne, Rose of the Sea’s Open Circle for Imbolc on Friday 2/1, 7pm at Ancient Light.

It’s beautifully sunny and the sky has a lot of high streaky cloud. The waves on the bay are sparkling. 45F, wind at 4mph, AQI 40. This is that mid-winter break in the rain. Get your yardwork stuff taken care of because we’re back to normal on Wednesday!

Yesterday we overslept a bit, getting open just a couple of minutes after the usual time. <sigh> Friday mornings are the worst. We were really busy up until 2pm at which point we had some lunch…. We had a lot of folks in after that, too, until well past closing time. I went in back and curled up for a nap for awhile. At around 7 Tempus ran a set of boxes up to storage and came back with another set to replace them.

Amor called in the evening. He’s dealing with a houseful of sick kids on his day off, helping out a buddy. I got a nap after that and we had supper very late. I got my boxes put away and started working on sorting a few other things, but I didn’t have any energy. My head is congested enough to make me cough, every so often. So, I did a little embroidery and read some and eventually went to sleep. Of course, I was up during the night, coughing, but I did get back to sleep, afterwards.

Today I’ve called off the Herbs workshop & Sewing. Nobody needs this germy stuff all over their herbs or them! We’ll be open at 11. I need to get some more things put away and get some things ready to ship. Tempus needs to water plants today and we need to shift a few of them, too. 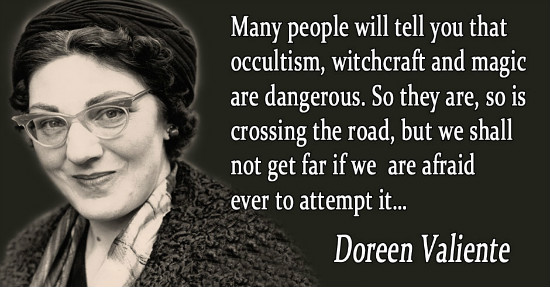 Today’s Plant is the Linden Tree, tilia species. It is also called lime tree (no relation to the fruit) and basswood.  It is the national tree of many countries, particularly in Central Europe, (the Czech Republic!) where at one time it was sacred and councils met at the sacred linden, just as in the British Isles they met at an oak. The wood is widely used for carving and for guitars.

The inner bark of the tree has been used in making fabric. The flowers, which smell delicious, are used in teas and perfumes and a valuable honey is derived from them. The flowers, leaves, wood, and charcoal (obtained from the wood) are used for medicinal purposes.– Feminine, Jupiter, Water, Taurus – Bark used for protection, leaves and flowers for immortality. Good Fortune, Sleep and Love. Hang branches over the door for protection or grow in the garden. Use in love spells/mixtures and protection spells & incenses. Mix equal parts Linden and Lavender flowers and place in a sachet under your pillowcase to relieve insomnia. Keep Linden on a table to release the energies needed to keep the spirit alive and healthy.

Today’s feast is the anniversary of the day in 1993 that Vaclav Havel was elected President of the Czech Republic. How many playwrights, even dissident playwrights, become president? How many countries would *pick* a playwright as president? Maybe the country whose anthem is this:

Waning Moon Magick – From the Full Moon to the New is a time for study, meditation, and magic designed to banish harmful energies and habits, for ridding oneself of addictions, illness or negativity. Remember: what goes up must come down. Phase ends at the Tide Change on 2/4 at 1:04pm. Waning Gibbous Moon – Best time for draining the energy behind illness, habits or addictions. Magicks of this sort, started now, should be ended before the phase change to the New Moon. – Associated God/dess: Hera/Hero, Cybele, Zeus the Conqueror, Mars/Martius, Anansi, Prometheus. Phase ends at the Quarter on 1/27 at 1:10pm. 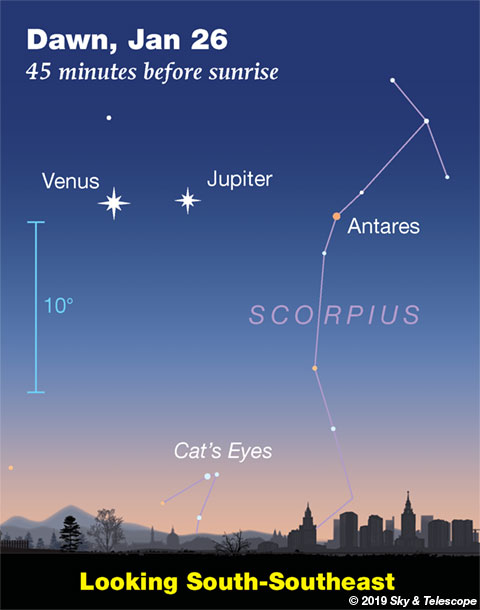 A week later they’re widening again, and their positioning is quite different.

This image of the Orion constellation, taken in October 2010, shows the dim clouds of nebulous, glowing dust that sit in the field. The asterism Orion’s Belt (composed of the stars Altitak, Alnilam, and Mintaka) is visible in the lower-left quadrant of the image, while the red supergiant Betelgeuse can be seen in the top left. – Rogelio Bernal Andreo

Orion is high in the southeast right after dark, and he stands highest due south around 10 p.m. Orion is the brightest of the 88 constellations, but his main pattern is surprisingly small compared to some of his dimmer neighbors. The biggest of these is Eridanus the Euphrates River just to his west, enormous but hard to trace. Dimmer Fornax the Furnace, to Eridanus’s lower right, is almost as big as Orion! Even the main pattern of Lepus, the Hare cowering under Orion’s feet, isn’t much smaller than he is.

Though Mars is now dry and desolate planet (left), scientists now believe the Red Planet may have once been awash with water and a thick atmosphere (right), bearing a much closer resemblance to modern-day Earth. – NASA/GSFC

Mars continues to put on a nice show in January. Look for the Red Planet halfway to the zenith in the southwestern sky as darkness falls. The world shines at magnitude 0.8 against the much dimmer stars of southern Pisces. (Tonight, Mars slides 0.9° south of the 4th-magnitude star Epsilon (e) Piscium. A telescope reveals the planet’s 6″-diameter disk, but you likely won’t see any surface features unless you have exceptionally good seeing. 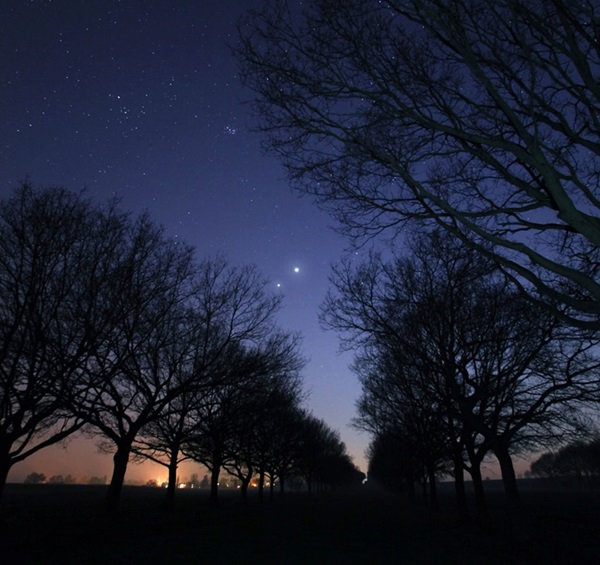 A Venus-Jupiter conjunction – The two brightest planets had a stunning conjunction in March 2012. Brilliant Venus then appeared 3° to the upper right of slightly fainter Jupiter. This week, the two planets approach within 2° of each other. – Jamie Cooper

Venus (magnitude –4.4) and Jupiter(magnitude –1.8) rise above the east-southeast horizon nearly two hours before the first light of dawn. They make a striking pair! By the time dawn begins to brighten, they dominate the southeast. They’re 4½° apart on the morning of the 18th, with Venus on top. They pass each other, 2.4° apart, on the morning of the 22nd. By the 26th Venus is 4° to Jupiter’s left. They’re in southern Ophiuchus. But about 8° to the right of Jupiter look for twinkly orange Antares, the leading light of Scorpius. At magnitude +1.0 it’s not nearly as eye-catching. In a telescope Venus appears just about at dichotomy: a dazzling little half-moon. The disk of Jupiter appears half again as large, but its surface brightness is some 50 times dimmer due to Jupiter’s 7-times-greater distance from the illuminating Sun.

Mercury is out of sight in conjunction with the Sun.

Runic half-month of Perdhro/ Peorth, 1/12-1/27. – Feast of Brewing, Druidic,Source: The Phoenix and Arabeth 1992 Calendar.
Runic half-month of Elhaz/Algiz, from 1/28-2/11. This half month: optimistic power, protection and sanctuary.

Affirmation/Thought for the Day – No intention of ours, no matter how noble it may be, is any better or stronger than our ability to remember it!

Journal Prompt – What does this quote say to you? – A man of words and not of deeds Is like a garden full of weeds. — Mother Goose

~   I mourn the loss of thousands of precious lives, but I will not rejoice in the death of one, not even an enemy. – Anonymous
~   Nothing travels faster than the speed of light with the possible exception of bad news, which obeys its own special laws. – Douglas Adams in The Hitchhiker’s Guide to the Galaxy
~   Discipline is the bridge between goals and accomplishment. – Kerr Cuhulain
~  Like being flogged with a warm lettuce. – Paul Keating on John Hewson

Faith is taking the first step
even when you don’t see the whole staircase. – Martin Luther King, Jr. (1929–68)

You are a branch in blossom.
You are a sheltering dome.
You are my bright precious freedom.
Brigid, lead me home. ~Irish Prayer To The Goddess

Highland women also invoked Brigid’s presence at the hearth-fire, the center of the home. The hearth was not only the source of warmth and cooking but also symbolized the power of the sun brought down to human level as the miraculous power of fire. Every morning the fire was kindled with invocations to St. Brigid, the “radiant flame” herself:

When a woman is in labour the midwife…goes to the door of the house, and standing on the door-step, softly beseeches Bride to come in:

‘Bride, Bride, come in!
Thy welcome is truly made,
Give thou relief to the woman,
And give thou the conception to the Trinity.’

Crios Bríde, or Saint Brigid’s Girdle, made from braided straw rope and carried in procession with the effigy of Bride throughout the town. At each house, the occupants were expected to pass through it, to obtain Bride’ protection and good health for the coming year. As they did this, the bearers of the crios chanted a verse. One version goes in translation:

Brighid’s girdle is my girdle
The girdle with the four crosses
Arise, housewife
And go out three times.
May whoever goes through my girdle
Be seven times better a year from now.