Featured photo by Aria August. Ancient Light will be closed on 2/23 because of the House Capuchin Winter Feast.

Overcast at the moment. 40F, wind at 1-2mph, AQI33, UV2. Chance of rain 90% today and 60% tonight. Tomorrow might be dry, but then Saturday looks nasty with rain and wind. AFter that though, Mon-Wed should be dry and then even if the showers pick back up, the rain amounts are a *lot* smaller than we’ve seen for a couple of weeks.

Yesterday was a Jonah day in a lot of ways. I kept breaking things or putting things where they got broken. Most of ’em were jars, so glass all over… and one nice pottery mug… and a bowl that *might* be mendable…and then I caught my brand-new jar of red sandalwood powder with the phone cord, reaching at an odd angle, and the glass bottle of it went onto the concrete floor. Since it’s for edible purposes and not just incense, that was $12 gone. I spent way too much of the day in tears….

We had all the feast boxes pulled out. That’s two shelf units worth of stuff to be sorted, cleaned and re-inventoried and then I have to decide what each thing is getting used for and tag them for the kitchen crew for the feast.

Tempus went out to do laundry and then he ran down to Yachats to pick up a couple of garment boxes that we’re going to put some of the costumes into, so’s to get them out of the way. He had to pick up the spot where one of the boxes was going to go to be loaded since there was a lot of junk in the way. …and then fold up the treadle machine so that the garment boxes could sit on top of it.

…and it got later and later… by midnight I was done with most of the boxes of gear, but Tempus was trying to make space for the costumes box. I ended up doing some blog posts while waiting. We didn’t get finished until 2:30…..

Today we’re intending to be open on time. There’s a lot still to be sorted out, but we’ve gotten it out of the customer areas, anyway. I need to finish with my boxes, getting the contents inventoried, then I need to work in back to get a bunch of clean jars and such put away. After that I need to empty the canned goods shelf into one of the other shelf units and then Tempus will move it to another location. We have the bulk route to do tonight. Still just the one…. 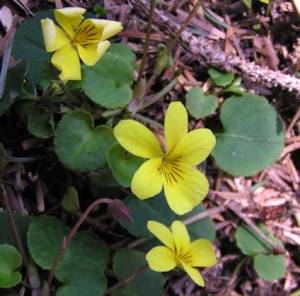 Today’s Plant is the Evergreen Violet, Viola sempervirens. This is a pretty plant that looks like nothing much through 9 months of the year here on the coast, but is spectacular in March, when it covers the ground with beautiful golden flowers on a deep blue/green background and still lovely in April/May. It is indeed evergreen, not withering to the ground, although it sometimes is overshadowed by grass. It grows well in the park behind the house. As any viola it is Feminine, ruled by Venus, but unlike the blue violets (corresponding to water) the Evergreen Violet corresponds to the element of Air and the Sun – Protects against malevolent spirits, brings changes in luck & fortune, wear to help with headaches, dizziness and to bring calm and sleep, wear in a green sachet to heal wounds.

Today’s feast is the Parentalia, a festival of ancient Rome. Quoting Wilson’s Almanac: “Temples were closed and weddings prohibited during the Parentalia, ancient Rome’s main festival of the dead, which lasted until the Feralia (February 21). It was customary for people to visit the graves of their parents and other relatives, placing offerings of wine, milk, oil, honey and water from springs. Also laid at the graves were sacrificial blood from the bodies of black animals. Mourners decorated the graves with roses and violets, then partook of a ritual meal at the graveside.
The mourners greeted each other with the words, Salve, sancte parens, “Hail, holy ancestor”.
Today was a day for the famed Vestal Virgins to perform a special ritual, in honour of their sacred ancestor, when they visited the cult’s parental shrine which was sacred to the early Vestal, Terpeia.
The Phoenix and Arabeth 1992 Global Spiritual Calendar (Phoenix and Arabeth, Ukiah, CA, USA, 1992) called it a “purification festival of [the] Goddesses Mania and Vesta, devoted to ancestors”.  ” More here: http://en.wikipedia.org/wiki/Parentalia

Waning Moon Magick – From the Full Moon to the New is a time for study, meditation, and magic designed to banish harmful energies and habits, for ridding oneself of addictions, illness or negativity. Remember: what goes up must come down. Phase ends at the Tide Change on 2/23 at 7:32am. Waning Gibbous Moon – Best time for draining the energy behind illness, habits or addictions. Magicks of this sort, started now, should be ended before the phase change to the New Moon. – Associated God/dess: Hera/Hero, Cybele, Zeus the Conqueror, Mars/Martius, Anansi, Prometheus. Phase ends at the Quarter on 2/15 at 2:17pm.

Lunar Alpenglow and Orion – The setting Moon casts its light on the sacred Chana Dorje peak at Yading National Reserve in the Sichuan province of China. In the background sky, you can see the three belt stars of Orion lined up almost vertically above the pyramid-shaped peak. The Horsehead Nebula (B33) is visible near the belt stars, and to the right is the great Orion Nebula (M42). The red, glowing circular structure surrounding Orion is Barnard’s Loop. Copper-colored Betelgeuse (Alpha Orionis) and blue Rigel (Beta Orionis) appear on the left and right sides, respectively. – Jeff Dai

If all you’ve been doing telescopically with Orion is gaze into the Great Nebula in Orion’s Sword, try turning to page 54 in the February Sky & Telescope for a tour of some much lesser-known telescopic sights in Orion’s Shield.

Saturn on November 20th, also imaged by Damian Peach with the Chilescope. South is up. This, he notes, is “a late-apparition image [i.e. the planet is not very high in darkness, even from Chile]. Probably my last one of this apparition. Little activity, but the polar hexagon is well seen along with the central polar spot.”

Although Saturn passed on the opposite side of the Sun from Earth only a month ago, it already appears low in the southeast before dawn. Look for the magnitude 0.6 ringed planet some 10° to the lower left of brilliant Jupiter. Saturn’s low altitude means it won’t look like much through a telescope, though that will change in the coming months.

Mars (magnitude +1.3, at the Ophiuchus-Sagittarius border) glows in the southeast before and during early dawn. It’s moving farther to the left or lower left of Mars-colored Antares, which is about magnitude +1.1. They’re 15° to 18° apart this week. Don’t bother with a telescope; Mars is still a tiny 5 arcseconds in diameter.

Runic half-month of Sowulo/ Sigel, 2/12-26 It represents the power of the force of good throughout the world and is the harbinger of victory and ascendancy over darkness.

Affirmation/Thought for the Day – Each new day offers us possibilities, don’t waste it.

Journal Prompt – Friends – Write about your best friend as if they were a stranger.

~   Before you diagnose yourself with depression or low self esteem, first make sure that you are not, in fact, just surrounding yourself with assholes – William Gibson
~   Other people do not have to change for us to experience peace of mind – Gerald Jampolsky
~   But suppose God is black? What if we go to Heaven and we, all our lives, have treated the Negro as an inferior, and God is there, and we look up and He is not white? What then is our response? – Robert F. Kennedy (1925-1968) US Politician
~   A fool gives full vent to his anger, but a wise man keeps himself under control. – Proverbs 29:11, New International Version

Poor robin redbreast,
Look where he comes;
Let him in to feel your fire,
And toss him of your crumbs. – Christina G. Rossetti (1830–94)

Valentine’s Day, also called Saint Valentine’s Day or the Feast of Saint Valentine, is celebrated annually on February 14. Originating as a Western Christian feast day honoring one or two early saints named Valentinus, Valentine’s Day is recognized as a significant cultural, religious, and commercial celebration of romance and romantic love in many regions around the world.

There are numerous martyrdom stories associated with various Valentines connected to February 14, including a written account of Saint Valentine of Rome’s imprisonment for performing weddings for soldiers who were forbidden to marry and for ministering to Christians persecuted under the Roman Empire. According to legend, Saint Valentine restored sight to the blind daughter of his judge, and he wrote her a letter signed “Your Valentine” as a farewell before his execution. The Feast of Saint Valentine was established by Pope Gelasius I in AD 496 to be celebrated on February 14 in honour of the Christian martyr, Saint Valentine of Rome, who died on that date in AD 269.

The day first became associated with romantic love within the circle of Geoffrey Chaucer in the 14th century, when the tradition of courtly love flourished. In 18th-century England, it grew into an occasion in which couples expressed their love for each other by presenting flowers, offering confectionery, and sending greeting cards (known as “valentines”). Valentine’s Day symbols that are used today include the heart-shaped outline, doves, and the figure of the winged Cupid. Since the 19th century, handwritten valentines have given way to mass-produced greeting cards. In Europe, Saint Valentine’s Keys are given to lovers “as a romantic symbol and an invitation to unlock the giver’s heart”, as well as to children to ward off epilepsy (called Saint Valentine’s Malady).