Featured photo by Mark Nessel. Minus Tide at 9:25 AM of -1.7 feet. The shop is open, limited hours, 1-5pm, Thursday through Monday. 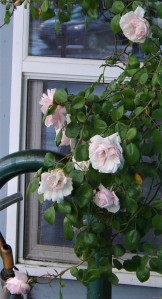 It’s getting a little easier to wake up on time, but if I miss any sleep during the night I’m toast. I got up, checked mail, and got myself together for the day. I was at my desk when the phone rang. It ended up being a consult on what to use instead of the Moldavite he was requesting. So folks, real Moldavite is almost impossible to come by. The bed is mined out, so everything out there that’s less expensive is fake (although some is tektites and some fulghurites, which have similar properties) and the rest of it is recycled, so goodness knows what it is. Lots of people still have it in their shops and just don’t know. 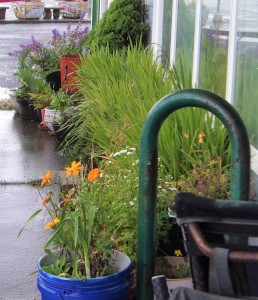 So Tempus and I got the shop open. The air smelled wonderful after the rain, I was glad to be cool, finally.  We sat down to the “different” tasks. Loren worked on a bone needle, filed another lotus seed and sanded our big wooden nibbles tray. I was doing emery strawberries and a little rocking chair frame pincushion, plus mending a cushion and other small tasks. He worked on a bone needle and then sanding our big “nibbles” tray that we use for potlucks. The grain had picked up in a few spots (probably from standing liquid) and the finish was flaking in others, so he’s getting it down to where it will be finished with just wood butter. 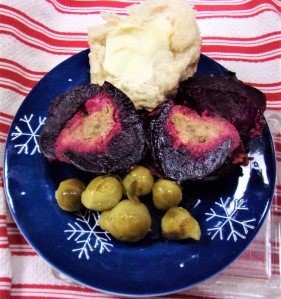 The stuffed beets, pickles and bread

Rain bucketed down for a few minutes, late in the afternoon, right about as we were working on supper. I had some of the soup that I made earlier in the week and Tempus had his beet and pickles and bread. I got a nap and then embroidered. I’m finishing a cup insert for Sioned. Tempus finished a fid. I sorted laundry and he headed out at around 1:30. 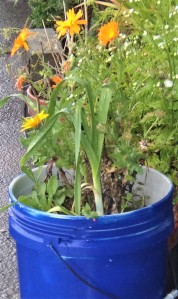 FLowers and leek. That’s the leek that went into the stuffed beets. 6/7/20

The news on the virus situation in our county went really sour, yesterday. I’m not sure what the official numbers are, but it’s huge with the outbreak at Pacific Seafood, and those folks were out and about in the county. Apparently a bunch of them acted up at Taco Bell in Newport, where Sash is, throwing things around and making messes in the dining room. He ended up taking a soda in the face from one them, so they’ve been banned at the “Bell”. <gleep> Not something we need on top of how unhappy everyone is at the moment. Not only that, but the dreaded “spike” from Memorial weekend tripled or quadrupled the numbers of other cases…. So… now what? Should we hunker down again and wait for *this* mess to go by? Close down again? Another two weeks? We’re actually thinking about it and will make a decision today. In a week we’ve gone from under a dozen cases to well over 100, might even be over 125… luckily, few extra have landed in the hospital, but that could change in minutes…. Oof. I hate being a scaredy cat, but I really am, with this one…. especially since so many think it’s a scam, not real, just a cold…. I’m appalled… 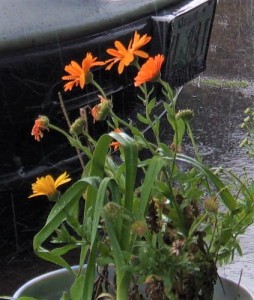 So *that* doesn’t make for restful sleep. I did my due diligence. I posted that silly pic of me with mask and tiara with the wording. “You protect me. I protect you. Not so difficult to understand… Please wear a mask for all of us high-risk people!” …and I’m getting “masks don’t work”… if that’s so, why are the places where they were really used well having an easier time dealing with this pandemic? <snarl> Why should I have to be worried about getting sick because other people are too special to be inconvenienced? 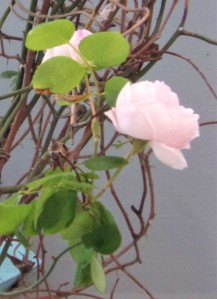 Today we’ll still be open 1-5pm. We have plant watering to take care of and some stocking to finish up before the weekend.

I’m still trying to get that gift exchange package out, which means some sewing, too.

Btw, the poem in today’s Quotes section was one of Grandma’s favorites. Even in her last year as her memory was really eroding, she could quote it. One of the others that she quotes often was, “The fog creeps in on little cat feet.” Good memories. 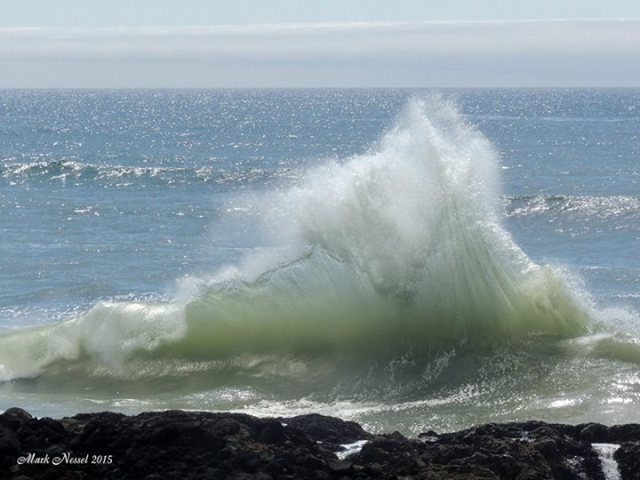 This picture of a wave crash was taken by Mark Nessel on 5/25/15 ‎and posted on the Yachats Community Facebook group. Used with permission (C)2015 Mark Nessel

Today ‘s feast is that of Bona Mens in the old Roman Empire. Mens is the personification of the “good mind” and had a temple on the Capitoline Hill. It’s long gone and there were apparently no records made of what it looked like. There’s a wiki article here: http://en.wikipedia.org/wiki/Mens 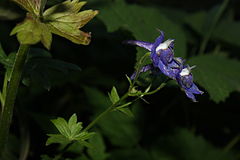 Today’s Plant is the local larkspurs, delphinium trollifolium, and delphinium pavonaceum (which the Wiki article says is confined to 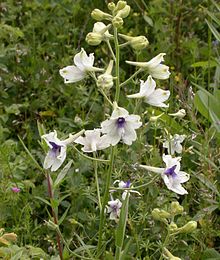 the  Valley, but I’ve collected out here….) are pretty flowers in shades of white, blue and purple. They’re called delphiniums (dolphins) after the shape of the nectary. More here:   http://en.wikipedia.org/wiki/Delphinium_trolliifolium and here:  http://en.wikipedia.org/wiki/Delphinium_pavonaceum   Other names are Larksheal and Staggerweed – Feminine, Venus, Water – The flowers frighten away venomous creatures and ghosts. Sprinkle between your eyes and a Litha fire to keep your sight clear. Use in rituals to call upon Dolphin energy. 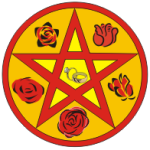 The shop is open, limited hours, 1-5pm, Thursday through Monday. Need something? Give us a call at 541-563-7154 or Facebook or email at ancientlight@peak.org We should be able to accommodate requests and even allow a little shopping, one person at a time.

Waning Moon Magick – From the Full Moon to the New is a time for study, meditation, and magic designed to banish harmful energies and habits, for ridding oneself of addictions, illness or negativity. Remember: what goes up must come down. Phase ends at the Tide Change on 6/20 at 11:02pm. Waning Gibbous Moon – Best time for draining the energy behind illness, habits or addictions. Magicks of this sort, started now, should be ended before the phase change to the New Moon. – Associated God/dess: Hera/Hero, Cybele, Zeus the Conqueror, Mars/Martius, Anansi, Prometheus. Phase ends at the Quarter on 6/12 at 11:24pm

The middle star of the Big Dipper’s bent handle is Mizar, with tiny little Alcor right next to it. On which side of Mizar should you look for Alcor? As always, on the side toward Vega! Which is now the brightest star in the east. If your eyes aren’t quite sharp enough, binoculars show Alcor easily.

The Big Dipper has swung around to hang straight down by its handle high in the northwest these evenings. The middle star of its handle is Mizar, with tiny little Alcor right next to it. On which side of Mizar should you look for Alcor? As always, on the side toward Vega, which is now the brightest star in the east.

Today is the 395th anniversary of the birth of Italian-French astronomer Giovanni Cassini. You most likely know the name either from the Cassini Division that separates Saturn’s A and B rings or from the NASA mission that spent over a decade

exploring Saturn and its extensive system of moons. Cassini’s planetary science claim to fame is threefold: He measured the scale of the solar system, discovered four moons of Saturn, and identified the large gap in Saturn’s rings. Early morning is the best time to get a look at the ringed planet, which rises around 11:30 P.M. local time. By 3 to 4

A.M., it’s higher in the sky for easy viewing. You can find magnitude 0.4 Saturn in the south, just 5° northeast of brilliant magnitude –2.6 Jupiter. A bright, 92-percent-lit Moon hangs nearby. Farther southwest is the familiar Teapot asterism of Sagittarius. The disk of Saturn appears 18″ wide, while its rings stretch roughly 41″ across. Although the background sky will be bright thanks to the Moon, you may still be able to spot the dark Cassini Division, which appears as a thin gap but actually spans an average of nearly 3,000 miles (4,800 kilometers), although its width varies. 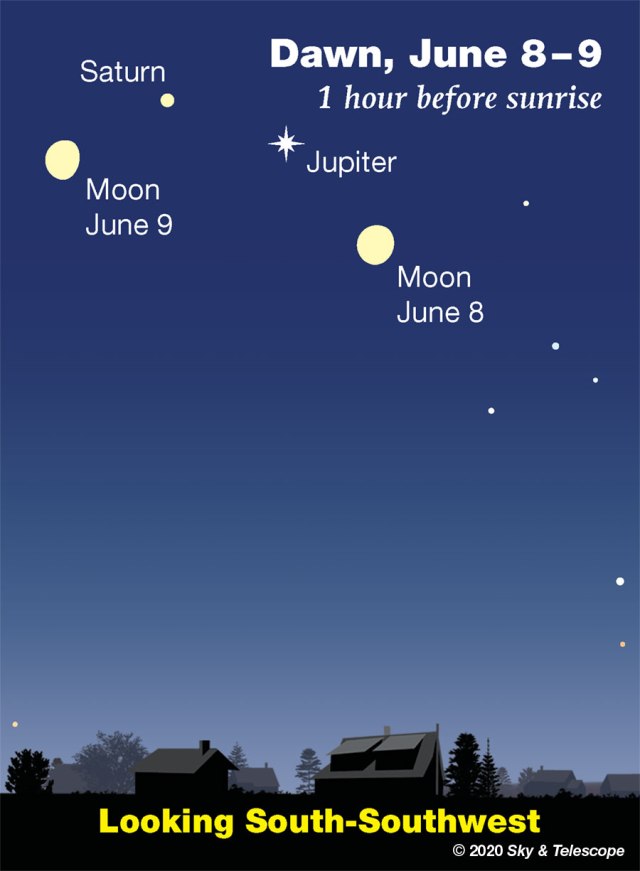 The waning gibbous Moon shines near Jupiter, then Saturn, before and during dawn on Monday and Tuesday.

The Moon passes 2° south of Jupiter at 1 P.M. EDT today. Nine hours later, the Moon passes 3° south of Saturn at 10 P.M. EDT. But both events take place when the planets aren’t visible.

Venus is out of sight deep in the glare of sunrise. It went through inferior conjunction on June 3rd.

Runic Half-month of Othala/ Odal/Odel 5/29-6/13- The rune Odel signifies ancestral property, the homestead, and all those things that are “one’s own”…
Runic half-month of Dagaz/ Dag, 6/14-6/28. – Beneficial rune of light, health, prosperity and openings, signifying the high point of the day and the high point of the year when in light and warmth all things are possible.

Celtic Tree Month of Huath/Hawthorn, May 13 – Jun 9 – I am fair among flowers – Color: Purple – Class: Peasant – Letter: H – Meaning: Being held back for a period of time – Hawthorn – Like willows, hawthorns have many species in Europe, and they are not always easy to tell apart. All are thorny shrubs in the Rose family (Rosaceae), and most have whitish or pinkish flowers. The common hawthorn (Crataegus monogyna Jacq.) and midland hawthorn (Crataegus laevigata (Poiret) DC.) are both widespread. They are common in abandoned fields and along the edges of forests. Both are cultivated in North America, as are several native and Asiatic hawthorns. Curtis Clark

to study this month – Ur – Heather and Mistletoe Ogam letter correspondences
Month: None
Color: Purple
Class: Heather is Peasant; Mistletoe is Chieftain
Letter: U
Meaning: Healing and development on the spiritual level.

Affirmation/Thought for the Day – Don’t ask for an easier life; ask to be a stronger person.

Journal Prompt – Where? – Where would you want to live if Earth was uninhabitable.

~   Experience is a good school but the fees are high. – Heinrich Heine
~   The key to success isn’t much good until one discovers the right lock to insert it in. – Tehyi Hsieh, Chinese educator, writer and diplomat
~   Measure your self by your best moments, not by your worst.  We are too prone to judge ourselves by our moments of despondency and depressions. – Robert Johnson
~   Straighten up your room first, then the world. – Jeff Jordan

In winter I get up at night
And dress by yellow candle-light.
In summer, quite the other way,
I have to go to bed by day.

And does it not seem hard to you,
When all the sky is clear and blue,
And I should like so much to play,
To have to go to bed by day? – Robert Louis Stevenson (1850–94)

Another favourite and very simple dessert to make is the Mexican pastry, sopapillas. Dipped in honey, the light and airy texture defies explanation. Just try them!

Note: Using evaporated skim milk and no butter reduces fat grams to 1.3 only 5 percent of calories from fat.

…and here’s an extra, that’s from some of my historical research

Silliness – Silly Q&A – Question: Why are mountains so funny? Because they are hill-areas (Hilarous)