The shop is closed on Wednesday, but open for limited hours, 1-5pm, Thursday through Monday. Minus Tide at 9:45 AM of -1.1 feet. Featured photo by Anja.

Who decided we were going to get a rain shower tonight? I never saw it, but the pavement’s wet and there are puddles. It was dry when Tempus left.  58F, winds are calm, AQI25, UV8. 10% chance of rain today and tonight. I hope they’re closer to right than it is tonight! The chance of rain is dropping out of the forecast. Pretty much this next 10 days is supposed to be mostly sunny with 20% chance of rain or less (and that at night) …and the temps finally creeping up to the mid-60’s.

We took our time getting moving yesterday and didn’t finish our 2nd cups of coffee until nearly 5pm. Tempus ran errands before I was even out of bed. I got a shopping list put together. …and then realized I wasn’t going because I didn’t have any clean clothes! Oh, I had crappy clothes, but not anything I wanted to wear in public….

So I got into the Zoom chat for the Arts and Sciences for the closest SCA group and spent awhile with them. I got kinda frustrated because Tempus insisted on talking with me about stuff while I was in the middle of discussions. Worse, it was stuff that I knew he was going to want to talk about while he was in the store, or stuff that wasn’t anything I could help with. <sigh> But after he was out the door (bulk route night) I finished my discussions got some supper and went to bed to read for awhile. I dozed off.

He called and woke me, but I knew he was going to keep calling for awhile, so I didn’t try to go back to sleep, just finished my book between the next 1/2 dozen calls. He kinda had a cow over 16 lemons…. well, I plan to do a double batch of lemon curd (takes 6) and to make some limoncello (takes 10), which I’ve been wanting to do for a couple of years.

Today is going to be interesting. Once we’re up we’re heading for Milwaukee (OR) to pick up a small dishwasher and then heading right back. It’s at least 6 hours on the road, but it’ll give us plenty of time to talk about projects and such. The biggest problem is whether Tempus is going to get enough sleep to work with. We’re hoping to have enough energy at the end of the run to stop at Freddie’s to get the stuff that he didn’t have time for last night, plus I need a couple of clothing things that I didn’t want him to have to hunt for. 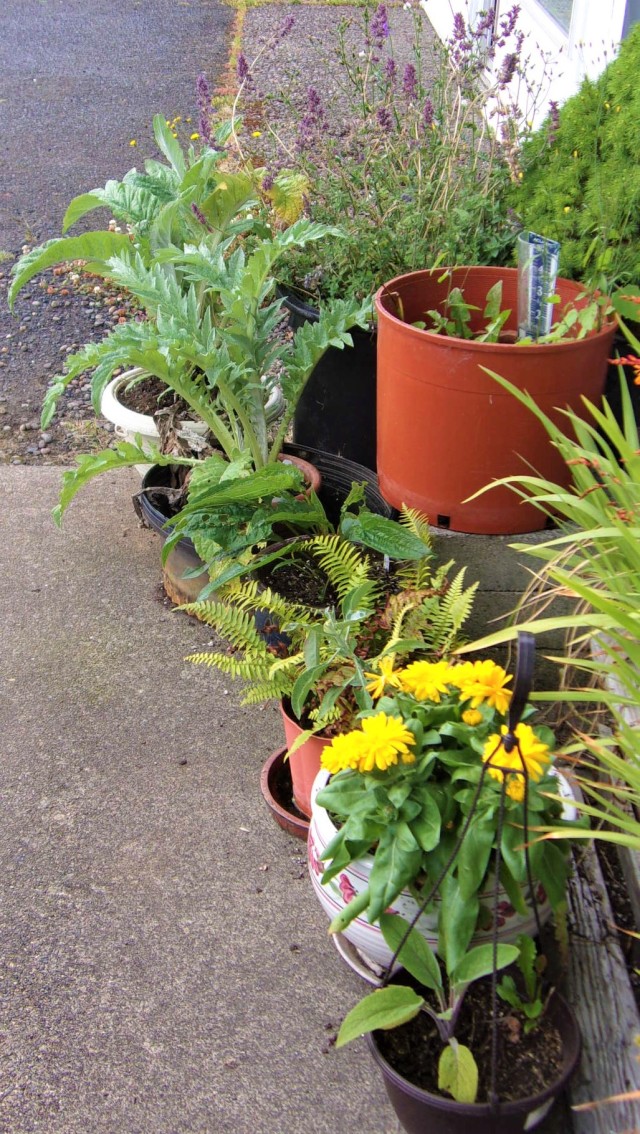 Today’s feast is that of St. Sunniva, who mostly likely is a distorted version of the Norse/Teutonic solar maiden goddess, Sol/Sunne. Supposedly she and a bunch of companions fled an invasion of heathen into a cave, which sealed itself up when she prayed to not have to marry their king. Yup, they died there, but miracles started happening on that island soon after. Was there a young woman named after the goddess about whom the didn’t-want-to-marry-a-pagan story was told?  http://en.wikipedia.org/wiki/Sunniva or http://en.wikipedia.org/wiki/S%C3%B3l_(sun)

rid of, although they’re fascinating in construction and growth habit. In Oregon they’re a noxious weed, since, while the plants have been used as a poverty food (early spring) they can be toxic to grazing animals and are dangerous to people who retain fluid, although the Romans used it both as a tea and a thickening powder. It can be used as a polish and a dye. – Feminine, Saturn, Earth, This is best used in fertility mixtures, sachets, amulets, etc. Place in the bedroom for help in conception. Whistles made of horsetail stems are used in snake charming.

Waning Moon Magick – From the Full Moon to the New is a time for study, meditation, and magic designed to banish harmful energies and habits, for ridding oneself of addictions, illness or negativity. Remember: what goes up must come down. Phase ends at the Tide Change on 7/19 at 10:33pm. Waning Gibbous Moon – Best time for draining the energy behind illness, habits or addictions. Magicks of this sort, started now, should be ended before the phase change to the New Moon. – Associated God/dess: Hera/Hero, Cybele, Zeus the Conqueror, Mars/Martius, Anansi, Prometheus. Phase ends at the Quarter on 7/12 at 4:29pm. 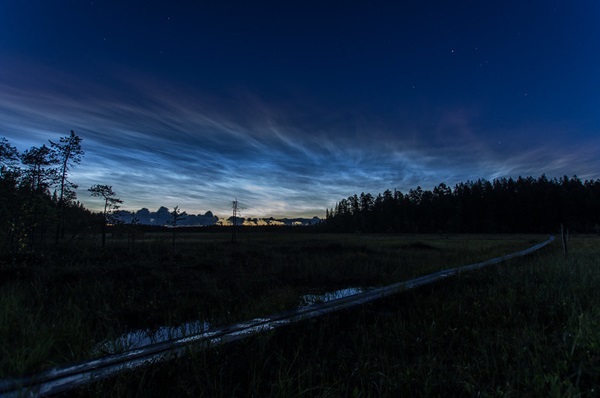 Noctilucent clouds at Pilpasuo – These night-glowing clouds appeared over Oulu, Finland, in August 2016. Such clouds are common during summer months. – Juho Holmi (Flickr

At the end of these long summer twilights, check the sky low in the northwest and north. Would you recognize noctilucent clouds if you saw them? They’re the most astronomical of all cloud types, being formed on meteor dust very high in the upper atmosphere. They’re fairly rare, though they’ve been growing more common in recent decades as Earth’s atmosphere changes. See Bob King’s Nights of Noctilucent Clouds.

summer, Arcturus >>>  and <<<< Vega, are equally high overhead at the end of twilight. Arcturus is toward the southwest from the zenith, Vega is toward the east. Arcturus and Vega are 37 and 25 light-years away, respectively. They represent the two commonest types of naked-eye star: a yellow-orange K giant and a white A main-sequence star. They’re 150 and 50 times brighter than the Sun, respectively — which, combined with their nearness, is why they dominate the evening sky.

The Northern Crown – Corona Borealis is a horseshoe-shaped constellation made up of seven stars. – Astronomy: Roen Kelly

Crane your head back this evening to find Corona Borealis the Northern Crown high in the sky after dark. If you’re having trouble spotting this small constellation, locate bright, golden-hued Arcturus (magnitude –0.05) in the south and scan about 20° northeast of the star. The Crown consists of seven stars that form a wide, curved horseshoe shape between Hercules and Boötes. This crown also hides a surprise: the recurrent nova T Coronae Borealis, or T CrB. Located 1° southeast of magnitude 4.2 Epsilon (ε) Coronae Borealis, T CrB is a binary star system containing a white dwarf and a red giant star. Over time, the white dwarf pulls material from its companion, until enough has built up on the surface of the dwarf that it sets off a runaway thermonuclear explosion, lighting it up without destroying the white dwarf in the process. Although the system is currently too faint to see without optical aid (around magnitude 10, typically the limit for binocular observing), it’s been known to reach magnitudes of 2 or 3 — visible to the naked eye — during an outburst. And it’s nearly due for one, already experiencing a period of high activity. Knowing that, this may be a good region of the sky to check every so often; and don’t be surprised if a “new” star appears one night, visible as a small “spur” off the curved crown’s shape.

Uranus (magnitude 5.8, in Aries) is up in the east just before dawn, about midway between Venus and Mars.

Celtic Tree Month of Duir/Oak, Jun 10 – Jul 7 – The oak of myth and legend is the common oak (Quercus robur L.). It is sometimes called the great oak, which is a translation of its Latin name (robur is the root of the English word “robust”). It grows with ash and beech in the lowland forests, and can reach a height of 150 feet and age of 800 years. Along with ashes, oaks were heavily logged throughout recent millennia, so that the remaining giant oaks in many parts of Europe are but a remnant of forests past. Like most other central and northern European trees, common oaks are deciduous, losing their leaves before Samhain and growing new leaves in the spring so that the trees are fully clothed by Bealltaine. Common oaks are occasionally cultivated in North America, as are the similar native white oak, valley oak, and Oregon oak. Oaks are members of the Beech family (Fagaceae). Curtis Clark

Affirmation/Thought for the Day – If it’s still in your mind, it is worth taking the risk.

Journal Prompt – Persuasive – Some business people argue that child labor is essential in third-world countries because the money children earn prevents families from starving. How would you answer this argument?

~   You do not lead by hitting people over the head. That is assault, not leadership. – Dwight D. Eisenhower
~   A sense of humor is the ability to understand a joke – and that the joke is oneself. – Clifton Fadiman
~   Watch what people are cynical about, and one can often discover what they lack. – Harry Emerson Fosdick, American religious leader.
~   No amount of self-improvement can make up for a lack of  self-acceptance. – Robert Holden, Writer

Silliness – Not my Monkeys