Clear 57F, winds are calm, AQI32, UV8. 10% chance of rain today and tonight. Today should be nice and clear, then we’re back to partly cloudy, except for Thursday night into Friday when there’s a tiny possibility of some dampness…..

Not so good. I’m apparently sick with something. Who knows what? Dunno if we’ll be open today, because Tempus isn’t doing well, either. Thankfully, I got some of these together enough to be able to get the newsletter out, anyway. 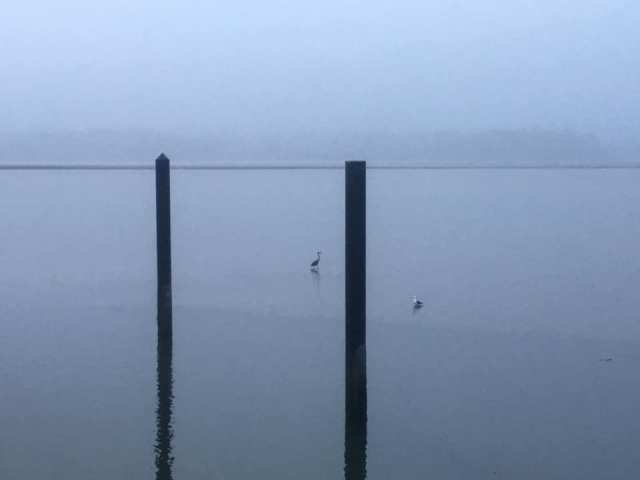 Alsea Bay from the Port Docks – Photo from 7/16/19 by Sam Standeven. She posts every morning, “Good morning, Waldport!” …and she’s moved, but there’s another lady who posts most mornings. 🙂

Today’s Feast is in honor of Sleipnir, Odin’s eight-legged steed that he rides between the worlds. I don’t know how the Asatru celebrate him, but there seems to be a connection to some kind of shamanic practice. The eight legs might stand for supernatural speed or for transportation beyond the natural. The picture is Odin, riding Sleipnir, accompanied by the ravens, Hunin and Mumir (Thought and Memory) and the two wolves, Geri and Freiki (Greed & Gluttony).  http://en.wikipedia.org/wiki/Slepnir   …and there is a posited connection between his eight legs and the “eight tiny reindeer” of the Santa Claus tradition.

Today’s plant is Oregon Iris, Iris tenax. I grew up calling Iris flowers “ladies’ ball gowns”. Local peoples used the tough leaves for making string and rope mostly for snares. –Feminine, Venus, Water – sacred to Iris and Juno, their magicks are used for purification and magicks including 3’s. The three petals stand for faith, wisdom and valor and can be used in magicks to promote these qualities. More on Oregon Iris here:http://en.wikipedia.org/wiki/Iris_tenax More on Iris in general here:http://en.wikipedia.org/wiki/Iris_%28plant%29

Waxing Moon Magick – The waxing moon is for constructive magick, such as love, wealth, success, courage, friendship, luck or healthy, protection, divination. Any working that needs extra power, such as help finding a new job or healings for serious conditions, can be done now. Also, love, knowledge, legal undertakings, money and dreams. Phase ends at the Tide Change on 8/3 at 8:59am. Waxing Crescent phase – Keywords for the Crescent phase are: expansion, growth, struggle, opportunity. It is the time in a cycle that you gather the wisdom learned in the new phase and communicate your intention to move forward. Light a candle. Write or read an affirmation. LISTEN & ABSORB. Commit to your goal. God/dess aspect: Maiden/Youth, energy and enthusiasm – Associated God/dess: Artemis & Apollo, Mayet/Djehuti, Freya/Frey. Phase ends at the Quarter on 7/27 at 5:33am.

Billy Hunt – Not exactly the coast, but, vintage Oregon. Comet Neowise, Crater Lake, Jul 19, Used with permissionComet C/2020 F3 (NEOWISE) continues to delight as an evening comet. An hour after sunset, it’s roughly 30° high in the northwest. You can find it by drawing a line between the two rightmost stars in the Big Dipper’s cup — Dubhe (at the top) and Merak (bottom) — and continuing the line south another 15° from Merak to spot the comet. Magnitude 3 Al Kaphrah is nearby, about 3° north-northeast of NEOWISE. The comet is just a bit fainter than magnitude 2 and you’ll likely need binoculars or a small telescope to see it. But with optical aid, you should also spot the comet’s tail, which stands out best in photographs. NEOWISE recently passed Earth on July 23, when it was just 64.1 million miles (103.2 million kilometers) from our planet. As it continues to pull away from the Sun and Earth’s orbit, it will continue to dim, although observers can expect to enjoy this binocular object for at least the rest of the month.

First-quarter Moon tonight and tomorrow. (It’s exactly first-quarter at 8:33 a.m. July 27 EDT). The Moon appears just a trace larger than average; it was at perigee two nights ago. Tonight Spica is below the Moon. Arcturus is high above, to their upper right.

Observers willing to brave the wee hours of the morning will be rewarded with a dark, moonless sky today. If it’s particularly clear, consider searching out the Dumbbell Nebula (M27), located in Vulpecula the Fox. This planetary nebula — the result of an aging Sun-like star puffing away its outer layers late in life — was discovered by Charles Messier in 1764. You’ll find it amidst the dusty plane of the Milky Way, which is standing straight up from the southwestern horizon around 2 A.M. EDT. At that time, M27 is roughly 70° high and, although it’s a bit challenging with binoculars, a small scope will easily show it. A larger scope will bring out more detail. Most telescopes should reveal the nebula’s bi-lobed structure, from which it gains its name. Nearby is open star cluster NGC 6885 (Caldwell 37). This magnitude 6 cluster is roughly 7′ across and can sometimes be seen — barely — with the naked eye. It’s an excellent binocular or telescope target. You’ll find it less than 5° north-northeast of M27.

Jupiter and Saturn (magnitudes –2.7 and +0.1, respectively) were recently at opposition: Jupiter on the night of July 13th, Saturn on the 20th. They loom in the southeast in twilight and pass highest in the south around midnight daylight-saving time. Jupiter is brightest; Saturn is 7° to its lower left or left. Farther to Jupiter’s right is the Sagittarius Teapot. Keep up with the telescopic interplay of Jupiter with its moons and their shadows, and find all the transit times of Jupiter’s Great Red Spot, in the Celestial Calendar section of the current month’s Sky & Telescope.

Runic half-month of Uruz/ Ur, 7/14-28 According to Pennick Ur represents primal strength, a time of collective action. A good time for beginnings! Pennick, Nigel, The Pagan Book of Days, Destiny Books, Rochester, Vermont, USA, 1992 Runic half-month of Thurisaz/ Thorn/Thunor, 7/29-8/12 – Northern Tradition honors the god known to the Anglo-Saxons as Thunor and to the Norse as Thor. The time of Thorn is one of ascendant powers and orderliness. This day also honors the sainted Norwegian king, Olaf, slain around Lammas Day. Its traditional calendar symbol is an axe.

Affirmation/Thought for the Day – Quit finding fault with everything and everyone. Love your loved ones.

Journal Prompt – Expository – Write any memories, feelings, and/or happenings that come into your mind when you hear the word “fireworks”.

~   No one is better than you, but you are no better than anyone else until you do something to prove it. – The mother of American statesman Bernard Baruch
~   All I’m trying to do is not join my ancestral spirits just yet. – Joshua Nkomo
~   Magic becomes art when it has nothing to hide. – Ben Okri
~   My act has fulfilled its purpose, but let nobody else do it. – Jan Palach, Czech student who died on this day in 1969, having self-immolated on January 16

O Thou who passest thro’ our vallies in
Thy strength, curb thy fierce steeds, allay the heat
That flames from their large nostrils! thou, O Summer,
Oft pitched’st here thy golden tent, and oft
Beneath our oaks hast slept, while we beheld
With joy, thy ruddy limbs and flourishing hair. – William Blake (1757–1827)

Silliness – Silly Q&A – Question: Why did the fisherman stop hauling shellfish? Answer: He pulled a mussel