Clear and 47F, winds are calm, AQI35, UV7. 10% chance of rain today and tonight. It looks like the next several days are just going to be clear, but Saturday they’re predicting a high of 75F! After that the temps ought to go back to the mid-60’s with an increasing chance of overnight rain showers…. ok, less than 25% until Friday morning, and then only 30%, but still a chance. 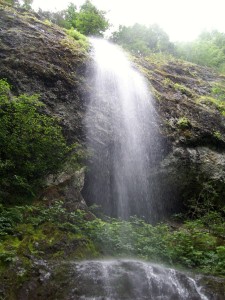 Yesterday I was up noon-ish and started working on setting up newsletter frames for the week. Tempus got up 2-ish and made coffee. I was dealing with a nasty case of wry-neck for some reason. Sheesh! I don’t get a break and then y’all listen to me gripe. 🙂

I got myself some lunch, 3-ish and finished the frames just a few minutes later. Tempus was working on equal parts of mail and coffee…. We got a bunch of stuff together to ship. ….well, I fought my way through (with tears and plenty of cussing) finishing making sure that all the

kits had all the pieces before it went out. I think I managed it… Oi…. and right in the middle as I was doing the paperwork on Paypal, we had a bunch of people walk through the door and shop. Tempus took care of them, but the paperwork took quite a bit longer than it should because I had to keep restarting both Paypal and the USPS site.

Tempus took everything over to the PO and the bank and brought stuff back. I got some personal grooming supplies in the mail and Louisa sent a piece of hardware for the sink. Eventually we made some supper. I *love* Tempus’ cole slaw! …and then we had classes and an interview to watch. The interview was with a friend from years back, someone we’ve known since the early 80’s, but haven’t seen much for the last couple of decades. 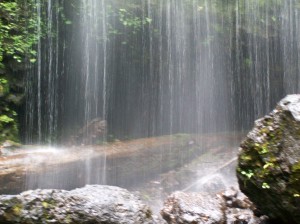 I went in back after the interview to start some cookery. I wanted to make the almond tarts, but almost as soon as I got started pulling things out I started smelling cigarette smoke and then I was wheezing. Apparently one of the people of the new folks moving into one of the storefronts north of us smokes….. So I ended up sitting up front, wheezing and got nothing done. Tempus went over to talk to him, so hopefully that won’t happen again. 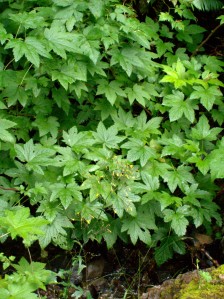 Later in the evening I worked on more braiding and some embroidery. I started pulling out my coins and putting them into coin pockets. I have to find all of the ID pieces for them. That way if I give some away, I’ll know what I’m doing! These are some of the reproduction coins that I have, mostly from Alpha Officium.

Today we’ll be open at 1. I need to meet on the phone with my doctor this afternoon. I think the appointment is at 3. Hopefully, it’ll be close to on time, and because it’s a bulk route night we’ll be closing somewhere around 7.

A photo for today from 8/6/16 by Ken Gagne of an Osprey in Yachats Bay. Isn’t that an incredible shot? 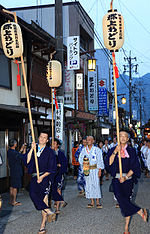 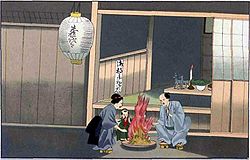 Today’s Feast is Obon, the Japanese festival of the Ancestors. It is a time of family reunion. Graves of ancestors are cleaned and offerings given, family altars with ancestor tablets are set up, and there is a lot of dancing, which sounds like trance dance from the descriptions. All of this comes from a Buddhist custom, meant to alleviate suffering of those who have already passed from this world. Different areas of Japan have different dances and different times to celebrate, plus there are several ways of dating, one from the modern calendar, and one from the lunar, and then local ways. More here: http://en.wikipedia.org/wiki/Obon and on the one in Gion here: http://en.wikipedia.org/wiki/Guj%C5%8D,_Gifu#Guj.C5.8D_Odori 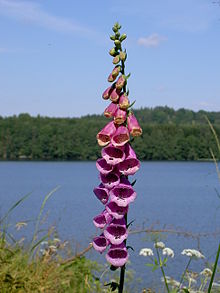 Today’s plant is Foxglove, Digitalis purpurea. It is naturalized in the PNW, being native to Europe, not the Americas. Digitalis was one of the first heart medications and was extracted from the plant and then synthesized. The plant is poisonous, not just because of this (too much causes irregular heartbeat), but some other chemicals. Also known as Lady’s Glove, Witches’ Gloves, Fairy Fingers, or Dead Men’s Bells. – Feminine, Venus, Water – A Druid sacred herb associated with the “little people”. Lust, protection, decision, grow in a garden for protection of house and yard, reveals insincerity. Flower meaning – a wish, “I am not ambitious for myself but for you”.

Waning Moon Magick – From the Full Moon to the New is a time for study, meditation, and magic designed to banish harmful energies and habits, for ridding oneself of addictions, illness or negativity. Remember: what goes up must come down. Phase ends at the Tide Change on 8/18 at 7:42pm. Waning Crescent Moon –Best time for beginning introspective magicks that are more long term (full year cycle) A good time for beginning knot magicks to “bind up” addictions and illness (finish just before the Tide Change of Dark to New) and “tying up loose ends” God/dess aspects – Demeter weeping for her Daughter, Mabon, Arachne Tyr. Phase ends on 8/14 at 10:42am.

As summer progresses and Arcturus moves down the western sky, the kite figure of Bootes that sprouts from Arcturus tilts to the right. The kite is narrow, slightly bent with its top leaning right, and 23° long: about two fists at arm’s length. Arcturus is its bottom point where the stubby tail is tied on. Off to the Kite’s right in the northwest, the Big Dipper slants diagonally.

Cassiopeia and the Big Dipper with Polaris between.

Tonight is a great night to check out two famous circumpolar constellations: Ursa Major the Great Bear and Cassiopeia the Queen. These familiar celestial sights are situated on opposite sides of North Celestial Pole, so during the night they appear to swing around Polaris, the North Star. From higher latitudes they never appear to set, always visible above the horizon. An hour after sunset, you can find the two constellations at roughly the same height above the northern horizon. The most recognizable part of Ursa Major is the Big Dipper asterism, which at this time appears on its side with its handle sticking straight up. In reality, the Big Dipper is only a small portion of the Great Bear, representing her stretched-out tail and hindquarters. Across the North Celestial Pole is Cassiopeia, whose equally recognizable W shape is tilted at about a 45° angle to the horizon. As the hours tick by, you’ll see the Big Dipper swing low, its cup tilting upward, while Cassiopeia swings higher. She first tips onto her side and ends the night upside-down as dawn on the 14th streaks the sky with light. 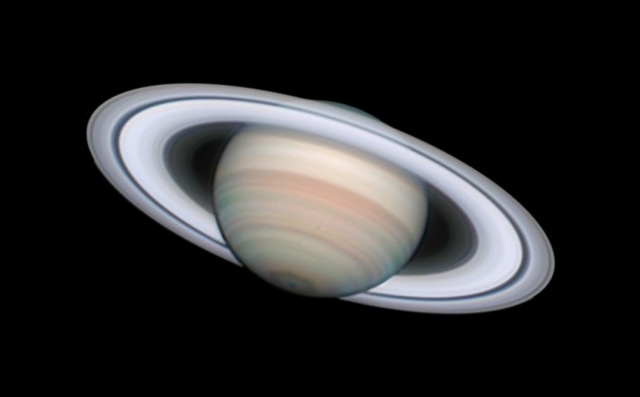 Saturn on July 27th, just a week after opposition, imaged by Damian Peach and Enrico Enzmann. South is up. The ring tilt has changed just enough that only a trace of the globe peeks up from behind the rings’ south edge.

Jupiter and Saturn (magnitudes –2.7 and +0.2, respectively) shine in the south-southeast in twilight. They pass highest in the south around 11 p.m. daylight-saving time. Jupiter is the brightest; Saturn is 8° to its left. Lower right of Jupiter after dark is the handle of the Sagittarius Teapot. High to the planets’ upper left, the brightest star is Altair. Keep up with the telescopic interplay of Jupiter with its moons and their shadows, and find all the transit times of Jupiter’s Great Red Spot, in the Celestial Calendar section of the August Sky & Telescope, page 50.

Affirmation/Thought for the Day – In the end, only kindness matters.

Journal Prompt – What does this quote say to you? – When spider webs unite, they can tie up a lion. — Ethiopian proverb

~   A man can succeed at almost anything for which he has unlimited enthusiasm. – Charles M. Schwab
~   The secret lies in how we handle today, not yesterday or tomorrow.  Today…that special block of time holding the key that locks out yesterday’s nightmares and unlocks tomorrow’s dreams. – Charles Swindoll, Clergyman and writer
~   I went to a restaurant that serves ‘Breakfast At Any Time’. So I ordered French Toast during the Renaissance. – Stephen Wright
~   The statistics on sanity are that one out of every four Americans are suffering from some form of mental illness. Think of your three best friends. If they’re okay, then it’s you. – Rita Mae Brown.

High noon in August! over all the land
The very air is palpitant with heat;
While stretching far, the fields of ripening wheat
Unrippled lie as plains of yellow sand! – Henry S. Cornwell (1831–86)

Crescent rolls are the holy grail of breads.  They come in a can, are fluffy and delicious and are ready in minutes.  They are even better when they are stuffed with bacon, scrambled eggs, and cheddar cheese.  As much as I love making things from scratch there is something sacred and special about crescent rolls. It’s probably because we always made them at Christmas because my grandfather loved them so much.

These are like a beautiful little breakfast sandwiches without any of the over the edge of the bread spillage.  Since they’re all rolled up they are easy to grab and eat, it’s even easier than a breakfast burrito!

Crescent rolls definitely work the best in this recipe.  I love using from scratch ingredients, but puff pastry is difficult to make well and is almost never the same. You could use pizza dough if you wanted to, but it would be missing that beautiful, buttery, fluffy texture.  It’s easy to make a big batch of these for Christmas morning.  You can also make a large batch and then freeze them and reheat them when you are ready to eat!

You can stuff them with sausage instead of bacon or other kinds of cheese instead of cheddar.  You can also skip the scrambled eggs if you want to and just do bacon and cheese.  If you like it spicy you can add a little hot sauce after they are finished.  You can also brush the tops of the rolls with melted butter for a little extra buttery flavor!

Bacon ‘n Eggs Pie – Recipe by Kraft, edited by Anja – An easy refrigerated biscuit crust is baked in a pie plate and then filled with scrambled eggs made with cream cheese and sprinkled with crumbled bacon.

Note – Any seasonings that you like. I’d skip the pepper. Not needed! Dill, garlic or onion, thyme, a bit of Italian mix, just go light on it…. And no, this does *not* need salt!

Silliness – To help you smile – You’re never going to believe this- but my doctor just told me I’ve got a protein deficiency. No whey!