Overcast. 50F, wind at 0-3mph and gusting, AQI 32-37, UV7. Chance of rain 8% today and 57% tonight. Today we might get to see some sunshine, but there’s a weather change starting this evening. Now through Friday (possible break on Wednesday) is more likely to be damp and showery than not. The highest chance is late tonight and then tomorrow evening into Monday. No fire spots. I won’t post on this again unless there are some.

Yesterday was a really strange day. We got some sleep in the morning, but hurried into the shop and got open a touch early. While Tempus was getting coffee a batch of kids came in, eventually followed by their father, who had to buy a mask. They got a bunch of little stuff and then a mom and daughter came in who are out here every year. They shopped a little a got a batch of larger stuff and then it was time to go.

They were still setting up when we got there. I managed to keep it together mostly, only weeping and squeaking and shivering rather than anything worse. …and they gave me a coupon for a free beer at the Yachats Brewing and Farm Store. 🙂 Tempus is going to go fetch that this afternoon for me, since we didn’t have time.

He had to run into Newport for his check and barely made it back in time to get to the bank. By then I was exhausted, but not sore or anything. We didn’t even bother with dinner, just went home and went to sleep. I was up at midnight and got a snack, at least. The papers are running late, so Tempus is still here. That will probably mean that we don’t get home this morning. (Just got the call at 3:15….)

I figured out that I’m teaching my class on Sunday, not today. That’s a relief, since I’m awfully tired. I think it’s the shot, but no other symptoms, yet. I’m going to try to keep on doing crystal headers, since those are pretty easy and there’s a whole basket of them. We have a box to pick up from Pacific Sourdough, since that was one of the things that I tempted myself with. Don’t judge. I have a real phobia about needles and this was almost more than I could bear…. So with the class on Sunday, I’ll be going over notes and such.

Today’s Plant is Rhubarb, Rheum rhabarbarum. Best known as “pie plant” or in strawberry and rhubarb jam this is a wonderful and nutritious stalk vegetable, that has been legally counted as a fruit, because of its uses. The roots have been used as a laxative for thousands of years, and the stalks, while strong-tasting when uncooked with no sugar, are delicious in sauces, pies, jellies, juice and so on, but the leaves are poisonous. It is very easy to grow since the roots will over-winter, even if the stalks die back and it’s one of the earliest vegetables to be harvestable. – Feminine, Venus Earth. – Wear a dried piece to help with stomach or gut pain and for general protection. The pie served to a mate helps to maintain fidelity and is an aphrodisiac, especially when combined with strawberries. More here: http://en.wikipedia.org/wiki/Rhubarb

Today’s feast is in honor of the Gay Rights Activist, Harvey Milk, who was assassinated in 1978. He was the first openly gay politician in California. More on his life and work here: http://en.wikipedia.org/wiki/Harvey_Milk and on the bill that passed to make this day official.

The shop opens at 1pm. Spring hours are Thurs-Mon. 1-6pm. For appointments contact us at 541-563-7154, anjasnihova@yahoo.com, on Facebook or here on the blog, or just leave a note on the door!

Waxing Moon Magick – The waxing moon is for constructive magick, such as love, wealth, success, courage, friendship, luck or healthy, protection, divination. Any working that needs extra power, such as help finding a new job or healings for serious conditions, can be done now. Also, love, knowledge, legal undertakings, money and dreams. Phase ends at the Tide Change on5/26 at 4:14am. Waxing Gibbous Moon – From seven to fourteen days after the new moon. For spells that need concentrated work over a ¼ moon cycle this is the best time for constructive workings. Aim to do the last working on the day of the Full moon, before the turn. Keywords for the Gibbous phase are: analyze, prepare, trust. It is the time in a cycle to process the results of the actions taken during the First Quarter. During this phase you are gathering information. Give up making judgments; it will only lead to worry. Your knowledge is incomplete. Laugh. Analyze and filter. LOOK WITHIN. God/dess aspect: Maiden/Youth, but in the uncommitted phase, the Warriors – Associated God/desses: Dion, Dionysius, Venus, Thor. Phase ends at the Full on 5/24 at 4:14pm. 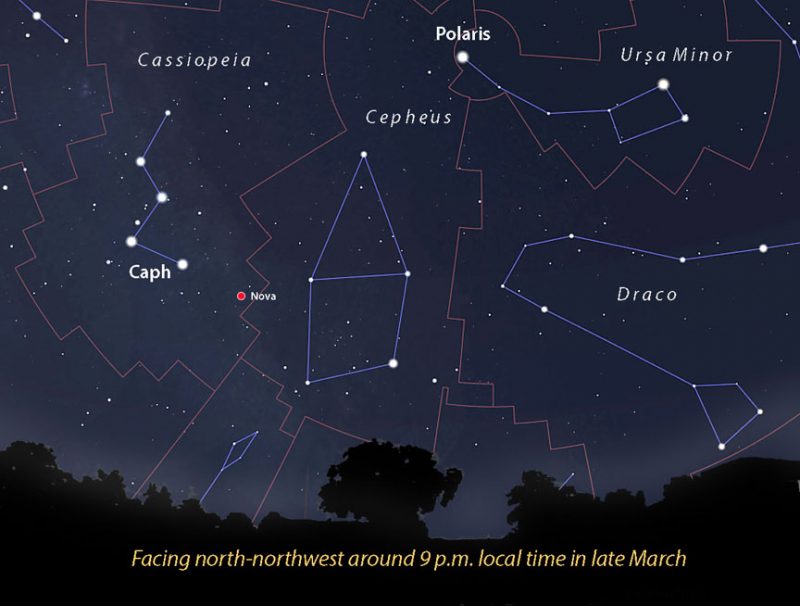 8th-magnitude Nova in Cassiopeia. Nova Cassiopeiae 2021, now also known as V1405 Cassiopeiae, has faded a trace to about magnitude 8.1 as of March 26th, after it was discovered at 9.6 on March 18th and quickly peaked around 7.7. For finder charts and more info, see Bright Nova Erupts in Cassiopeia. Moonlight will give you trouble with binoculars, even large ones, but the moonlight will be gone from the early-evening sky starting on the 30th. To get a light curve with the most up-to-date brightness measurements, go to aavso.org and in “Pick a Star”, enter “V1405 Cas” and choose “Plot a light curve”. There, visual observers’ estimates are the open black circles, and photoelectric V magnitudes are the green squares. (You can see calendar dates instead of Julian Days using “Preferences”.) And where’s Cassiopeia itself? Catch it sinking in the north-northwest right after the end of twilight. Look early before it gets too low

UPDATE: Nova Cassiopeiae 2021 suddenly shot up to magnitude 5.4 around May 8th — making it faintly visible to the naked eye in a dark sky — a full eight weeks after its initial outburst to magnitude 7. It had remained at 7th or 8th mag all during the interim. As of May 14th it faded back a bit to about mag 5.8. See Nova in Cassiopeia Brightens Suddenly, with finder charts and comparison stars. The nova is low in the north in the evening but high in the northeast before the first beginnings of dawn. Set your alarm to go look at least two hours before your local sunrise time. 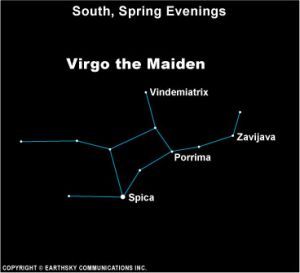 Spica shines one fist lower left of the Moon this evening. Three times as far to their upper left is brighter Arcturus.

The Summer Triangle meets the Milky Way – The three bright stars of the Summer Triangle occupy the upper left section of this stunning portrait of the summer Milky Way. Brilliant Vega appears near the top of the image, while Deneb lies to its lower left in the Milky Way’s plane and Altair to the lower right, just below our galaxy’s disk. The photographer captured the scene above Lake Alqueva in Portugal’s Alqueva Dark Sky Reserve. – Miguel Claro

Summer is still a month off, but the Summer Triangle is beginning to dominate the east. Its top star is Vega, the brightest. You can’t miss it well up in the in the east-northeast after dark. Its faint little constellation Lyra dangles down from it with its bottom canted to the right. Lyra’s main stars form a little equilateral triangle (Vega is one corner) with a tall parallelogram attached to the triangle’s bottom star. Dimmer Deneb shines lower left of Vega by a little more than two fists at arm’s length. The third corner of the Summer Triangle is Altair. It rises in the east, far to the lower right of Vega and Altair, soon after the night is fully dark.

Vega is the brightest star in the east-northeast after dark. Look 14° (about a fist and a half at arm’s length) to its upper left for Eltanin, the 2nd-magnitude nose of Draco the Dragon. Closer above and upper left of Eltanin are the three fainter stars forming the rest of Draco’s stick-figure head, also called the Lozenge. Draco always points his nose to Vega, no matter how he’s oriented. He seems curious about it. Do dragons eat jewels? He has made no move on it yet. The faintest star of Draco’s head, opposite Eltanin, is Nu Draconis. It’s a fine, equal-brightness double star for binoculars (separation 61 arcseconds, both magnitude 4.9). The pair is 99 light-years away. Both are hot, chemically peculiar type-Am stars somewhat larger, hotter, and more massive than the Sun.

Mercury and Venus come into view in the west-northwest in the afterglow of sunset. You may first spot Venus, bright at magnitude –3.9, very low. Look about 40 minutes after sundown. As the sky darkens, fainter Mercury emerges above it or upper left of it. The two planets close in on each other day by day; as Venus climbs, Mercury settles lower. Their separation shrinks from 6.5° on Friday May 21st to 0.4° at their conjunction a week later on the 28th. But Mercury is fading fast: from magnitude 1.1 to 2.3 during this time. So bring binoculars.

NIGHT SKY FOR May 2021 – https://www.almanac.com/night-sky-map-may-asterisms

Celtic Tree Month of Huath/Hawthorn, May 13 – Jun 9 – I am fair among flowers – Color: Purple – Class: Peasant – Letter: H – Meaning: Being held back for a period of time – Hawthorn – Like willows, hawthorns have many species in Europe, and they are not always easy to tell apart. All are thorny shrubs in the Rose family (Rosaceae), and most have whitish or pinkish flowers. The common hawthorn (Crataegus monogyna Jacq.) and midland hawthorn (Crataegus laevigata (Poiret) DC.) are both widespread. They are common in abandoned fields and along the edges of forests. Both are cultivated in North America, as are several native and Asiatic hawthorns. Curtis Clark

to study this month – Ur – Heather and Mistletoe Ogam letter correspondences
Month: None
Color: Purple
Class: Heather is Peasant; Mistletoe is Chieftain
Letter: U
Meaning: Healing and development on the spiritual level.

Affirmation/Thought for the Day – Choose joy.

Journal Prompt – Wiki – What do you dream about on a regular basis?

~   A flawed self image is an obstacle to your personal power. – Kerr Cuhulain
~   Circumstance does not make a man, it reveals him. – James Allen
~   A guilty conscience needs to confess. A work of art is a confession. – Albert Camus (1913-1960) French writer, born in Algiers
~   Nurture your mind with great thoughts; heroes are made by believing – Disraeli

The flowers in the breeze are swaying, swaying,
The whole wide world is out a-Maying. –Genevieve Mary Irons (1855–1928)

Faeries – At Summer Solstice the phenomenon of the Trooping Faeries will begin. Trooping Faeries live in large communities like a clan and may travel great distances in long processions. You will know that the Trooping Faeries are about when you hear other-worldly music and the sounds of a raucous party. Their favorite pastimes according to Yeats is feasting, fighting, making love and playing music. On Mid-Summer night, keep your eyes and ears open and you may be lucky enough to catch a glimpse of them!

St. John’s Wort – At Summer Solstice the Sun has reached its zenith in the sky and is as close to us in the northern hemisphere as it will ever get before it begins its slow descent which will lead us into winter. At Summer Solstice Saint John’s Wort is also in its height of flowering, and with its golden star-flowers full of stamens that look like rays bursting forth, the sun’s uplifting energy is captured on earth in the form of a humble flower.

Silliness – Punny Thought – Talk is cheap. Until you hire a lawyer…