Clear, 47F, wind at 1-4mph and gusting, AQI 10-29, UV5. Chance of rain 50% today and 100% tonight. SMALL CRAFT ADVISORY from 8am Friday to 5am Saturday Special Weather Statement for the weekend. 100% chance of rain both Friday and Saturday nights, but showers through Sunday and then a small chance of showers on Wednesday morning. The rest of the time it should be mostly sunny with temps going up to 70 on Tuesday. “Cold” is relative. Highs at worst in the low 60’s….. Most of the smoke is in the Cascades and smeared across the whole southern edge of the state. A lot is very light and the worst now is red, not purple. 9 firespots. C’mon rain!

At or nearing containment 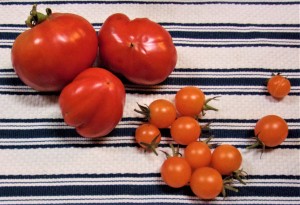 Yesterday and the day before were both really full, but of different things. Wednesday was sleep…. Even after plenty of sleep on Tuesday I was tired enough that I kept going back to bed. Tempus didn’t really wake until 10pm, but that was at least in part because we didn’t get home until well past noon. Car stuff took that long and there’s at least one more repair to do this morning, but he has completely functioning headlights again despite the deer. We finally got supper/lunch with coffee that late at night. Weirdly, the coffee made me sleepy! 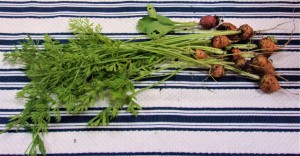 Ball carrots (thinned these out, more are left!)

I had been planning on staying home, but I found that I had a bunch of typing to do, so I came back into town with Tempus and typed nearly non-stop until about 5am. I have more to do, yet, but at least that’s a start…. All the way into town we watched a partly-nibbled green cheese Moon, very low, but very big and bright. It’s been lovely seeing the stars. I’m hoping that the predicted rain does a lot of good, but then leaves again off and on for a month or so. 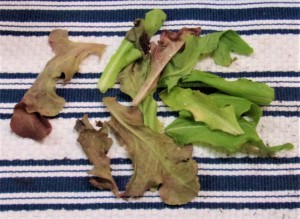 When he got in we went home and crawled into bed, which just felt really, really good. We got up in plenty of time, feeling rested for once, and I went out to harvest the things that might get messed up by the rain. 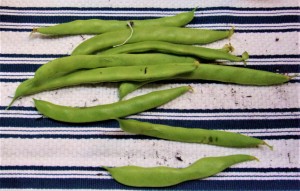 Once we were back at the shop, I got back to work on my typing while Tempus got us coffee and the last of the pie and started the wax heating. I only got the candles done very late in the day, but I was dealing with an asthma attack by then. A customer came in reeking of smoke and insisted that I was the one that had to help him. I couldn’t get away from it and spent a couple of hours wheezing, even with a mask. 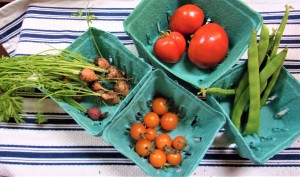 The whole harvest for the day.

The day had been pretty good up until then, although I didn’t get as far on my typing as I had been hoping. Tempus was working on back, mostly, trying to get ahead on some of the clean-up, so I was the one working with customers. One was the lady from Inspirations up in Lincoln City and we had a good chat. 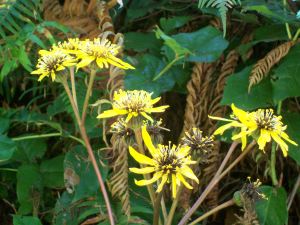 The asthma cancelled Herbs. I was exhausted from wheezing and coughing and went to lie down as soon as my lungs would cooperate. I got back up around midnight and got back to work, mostly on this, but alternating with typing. What am I typing? Recipes and notes from a book, “An Early Meal”, which is all about Norse (Viking era) cooking! It’s for the House Feast next February. …and hunting online for some of the strange things like whole yellow peas or wheat seeds for cooking…and goosefoots….

Today we hope to have the tires for the car in the morning. We’ll have the shop open at 1pm and stay open probably a little after 6. I have some cooking to do, though, so I don’t want to stay too late. I’m going to try to get candles inventoried today. 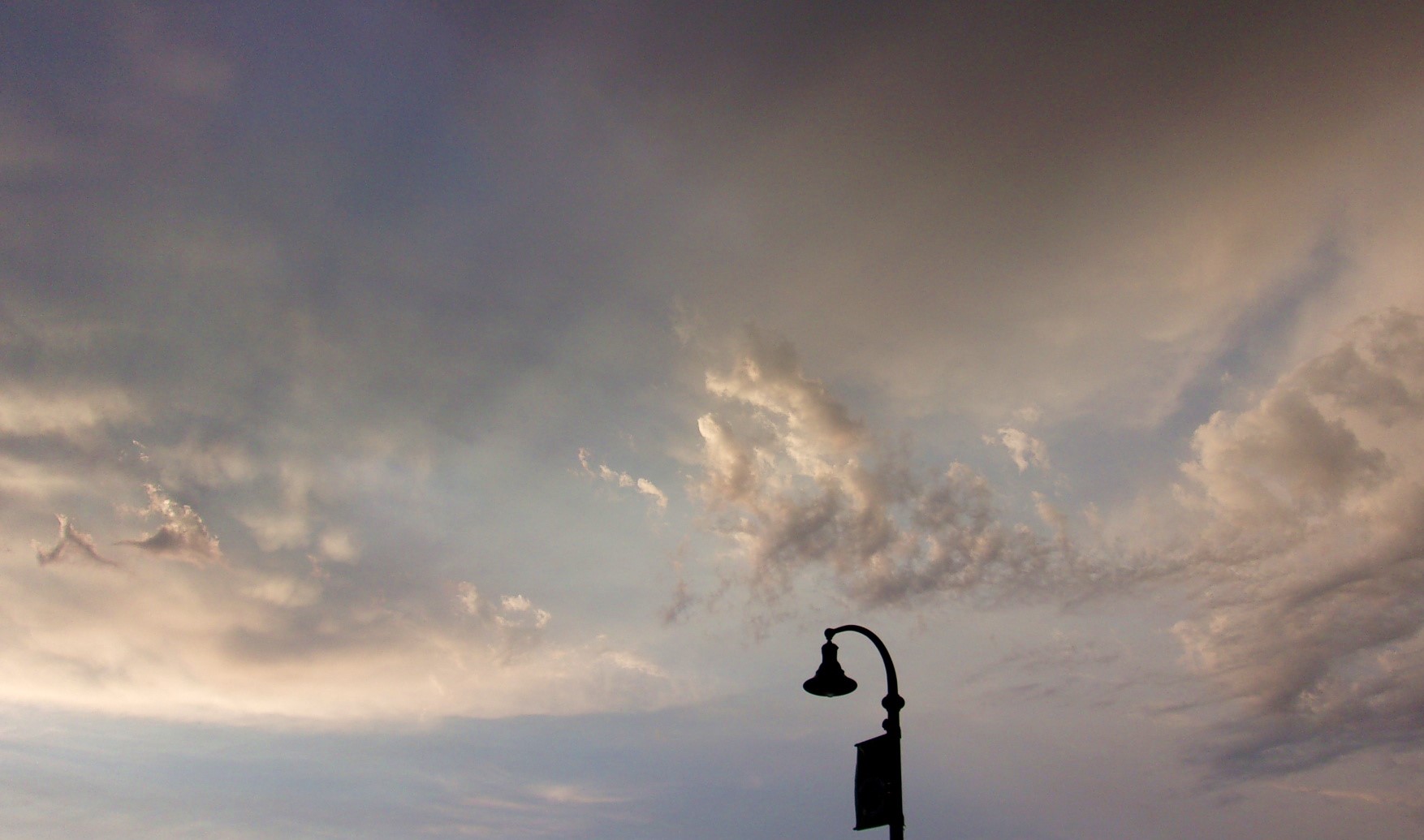 Feast day of Hildegard von Bingen, virgin, abbess and Medieval Polymath. She was a mystic, who probably had migraines, at least the descriptions of her visions start with what sounds like migraines…. but where she took it and how she interpreted it is pretty darned amazing! She wrote theological, botanical and medicinal texts, as well as letters, songs used in church ritual, and poems as well as a piece that is considered to be the oldest surviving morality play. More here:  http://en.wikipedia.org/wiki/Hildegard_of_Bingen

Today’s plant is Wild ginger, Asarum caudatum – This is a different plant from the one usually used in magick, but has only slightly different properties. This is related to black pepper, kava and birthwort. – Masculine, Mars, Fire – This is used for “heating up” spells. While standard ginger is used in money, love, success and power spells, Wild Ginger is mostly used to add power, rather than on its own.  http://en.wikipedia.org/wiki/Asarum_caudatum

The shop opens at 1pm. Summer hours are Thurs-Mon. 1-6pm. For appointments contact us at 541-563-7154, anjasnihova@yahoo.com, on Facebook or here on the blog, or just leave a note on the door!

Waxing Moon Magick – The waxing moon is for constructive magick, such as love, wealth, success, courage, friendship, luck or healthy, protection, divination. Any working that needs extra power, such as help finding a new job or healings for serious conditions, can be done now. Also, love, knowledge, legal undertakings, money and dreams. Phase ends at the Tide Change on 9/20 at 4:55pm. Waxing Gibbous Moon – From seven to fourteen days after the new moon. For spells that need concentrated work over a ¼ moon cycle this is the best time for constructive workings. Aim to do the last working on the day of the Full moon, before the turn. Keywords for the Gibbous phase are: analyze, prepare, trust. It is the time in a cycle to process the results of the actions taken during the First Quarter. During this phase you are gathering information. Give up making judgments; it will only lead to worry. Your knowledge is incomplete. Laugh. Analyze and filter. LOOK WITHIN. God/dess aspect: Maiden/Youth, but in the uncommitted phase, the Warriors – Associated God/desses: Dion, Dionysius, Venus, Thor. Phase ends at the Full on 9/19 at 7:55am. 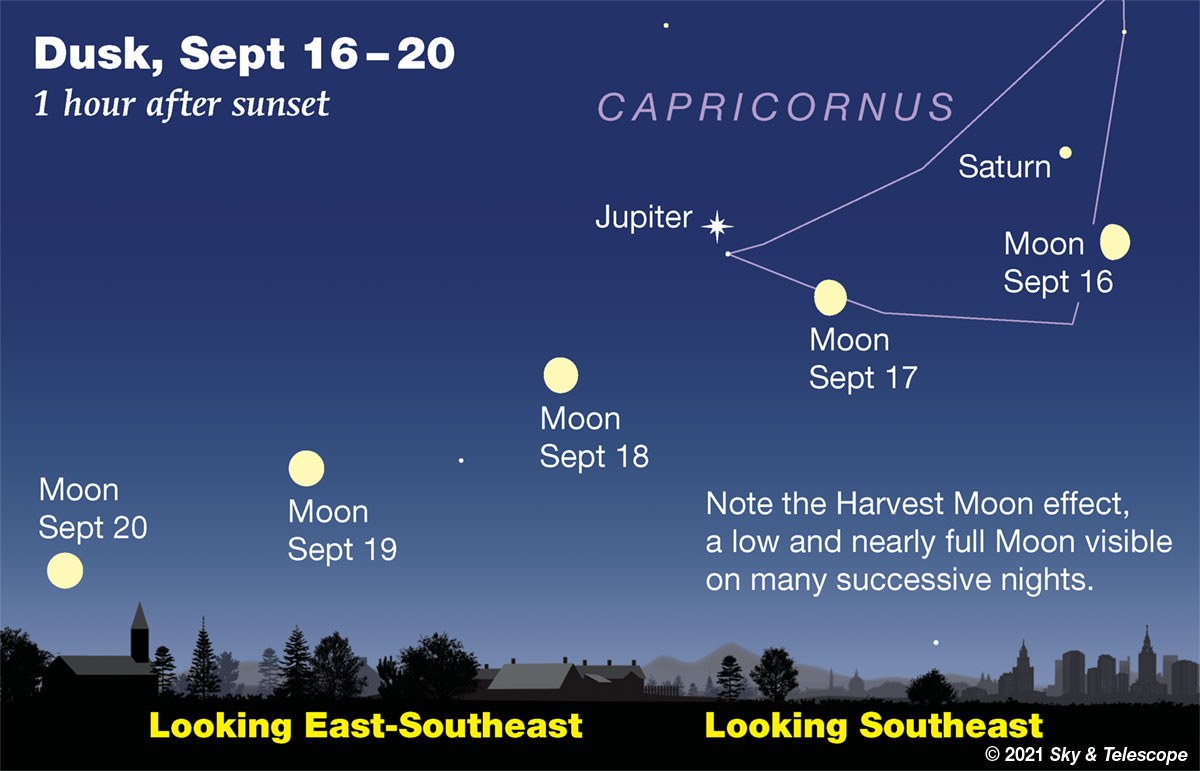 And now the gibbous Moon hangs lower right of the bright Jupiter at dusk, as shown above. Later in the night, as the sky turns, The Moon becomes directly below Jupiter. That’s how you’ll find them around midnight (daylight saving time). 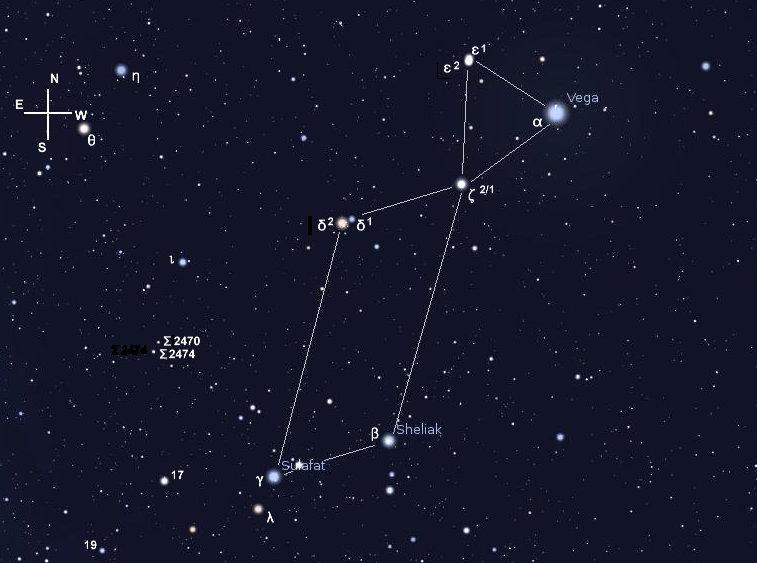 Bright Vega in Lyra is the sky’s fifth-brightest star, blazing high in the eastern sky after dark tonight. Part of its secret is that it’s so close — Vega is a mere 25 light-years from Earth. But it’s also a hot class A star, which also lends it some added oomph. But don’t let this single star outshine the constellation in which it resides. Lyra the Lyre contains several other stars, including the four — Zeta, Beta, Gamma, and Delta (δ) Lyrae — that make up its parallelogram shape. Beta Lyrae, also called Sheliak, is an eclipsing binary system with a period of 13 days. Over the course of about two weeks, Sheliak dims from magnitude 3.8 to 4.3, then brightens again. You can see this for yourself by comparing it nightly with steadier Gamma, also called Sulafat, which matches Sheliak in brightness when the latter is at its peak and shines brighter when Sheliak is dimmest. 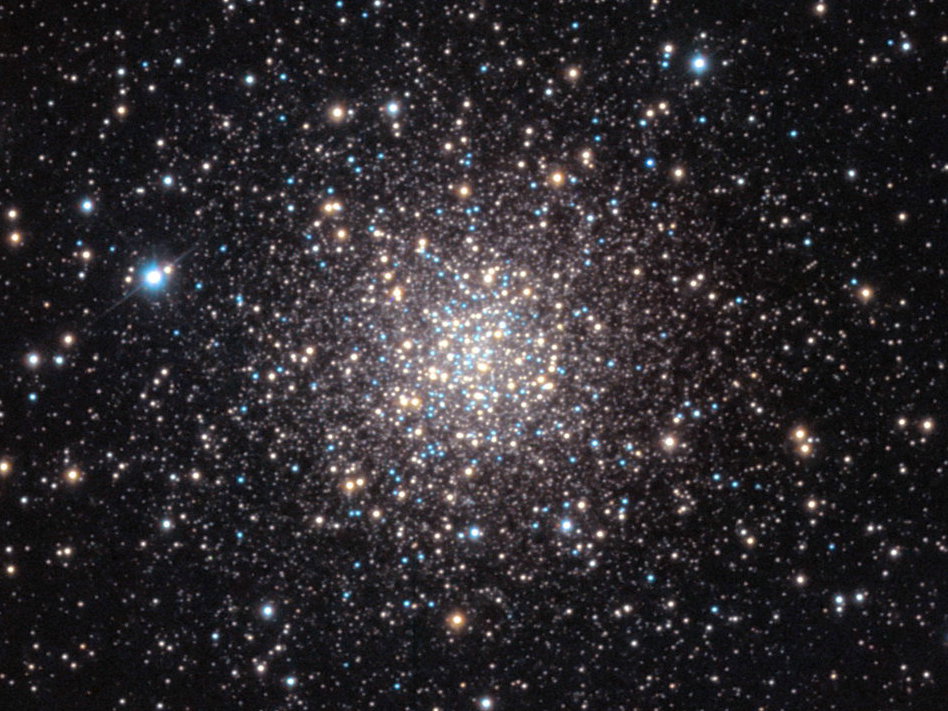 If deep-sky observing is on your to-do list, Lyra is also home to M56, a globular cluster in the constellation’s southern region. At magnitude 8.3, binoculars or a small scope will reveal this ball of stars, which stretches about 9′ across. At its distance of more than 32,000 light-years, that corresponds to a physical diameter of about 85 light-years in space. You’ll find it 4.5° southeast of Sulafat, or 3.7° northwest of Albireo (Beta Cygni).

Mercury (about magnitude +0.2) is very deep down in the sunset, 16° lower right of Venus this week. You might have a chance at it with binoculars or a wide-field scope. About 15 or 20 minutes after sunset, scan for it just above your horizon due west. Good luck. Between Venus and Mercury is fainter Spica, magnitude +1.0.

Runic half-month of Kenaz/Ken/Kebo – September 13-27 – Ken represents a flaming torch within the royal hall, so it’s the time of the creative fire – the forge where natural materials are transmuted by the force of the human will into a mystical third, an artifact that could not otherwise come into being. The positive aspects of sexuality that are immanent in Freya and Frey come into play at this time. Nigel Pennick, The Pagan Book of Days, Destiny Books, Rochester, Vermont, USA, 1992, p. 102

Celtic Tree Month of Muin/Vine  Sep 2 – 29 – Muin  – (MUHN, like “foot”), vine – The grape (Vitis vinifera L.) is a vine growing as long as 35 m (115 feet), in open woodlands and along the edges of forests, but most commonly seen today in cultivation, as the source of wine, grape juice, and the grape juice concentrate that is so widely used as a sweetener. European grapes are extensively cultivated in North America, especially in the southwest, and an industry and an agricultural discipline are devoted to their care and the production of wine. Grapes are in the Grape family (Vitaceae).

Affirmation/Thought for the Day – There is no competition because nobody can be me.

Journal Prompt – What do you think? – Why do you think almost everyone loves Charlie Brown and Snoopy?

Honest differences are often a healthy sign of progress. – Mohandas Gandhi
~   They understand but a little who understand only what can be explained. – H. L. Mencken (1880-1956) US writer
~   The faith that moves mountains always carries a pick. – Anonymous
~   All of your characteristics are tools that you can use. – Kerr Cuhulain

There are flowers enough in the summertime,
More flowers than I can remember:
But none with the purple, gold, and red
That dyes the flowers of September! –Mary Howitt (1799–1888)

Tip:  Leftovers can be re-heated in the nuker, but before you refrigerate, stir the pasta into the sauce.

DIRECTIONS
1.       In a large microwavable pot or bowl put spice mix (may be included with crumbs in some mixes), water and butter from stuffing.
2.       Chop onion and add to mixture.
3.       Chop chicken and add
4.       Zap in nuker for 5 minutes. Stir.
5.       Keep zapping, for two minutes at a time, stirring between.
6.       Add seeds or nuts. Stir. Add breadcrumbs from stuffing mix. Stir well and fluff with a fork.
7.       Chop squash in ½ longways. Scoop out seeds and discard.
8.       Pile stuffing mix into the centers of the squash. There will be leftovers.
9.       Put the 4 squash into an oven-safe dish, drizzle with melted butter and top with chopped fresh chives.
10.     Cover and bake at 350 for about an hour. Squash is done when a sharp knife or skewer goes down through the center to the pan with no resistance (feels like a done baked potato!)
11.     Serve hot. Store leftovers, covered. Can be reheated in the microwave if each serving is cut into ¼’s.

Tips This makes a good 8-serving side dish or 16-serving nosh.

Tart of cheese and eggs

Bibliography: A BOOK OF COOKRYE. Gathered by A. W., 1591 in https://jducoeur.org/Cookbook/Cookrye.html

Take good fine paste and drive it as thin as you can.  Then take cheese, pare it, mince it, and braye it in a morter with the yolks of Egs til it be like paste, then put it in a faire dish with clarified butter, and then put it abroade into your paste and cover it with a faire cut cover, and so bake it: that doon, serve it forth.

Silliness – How to Play It

The composer Robert Schumann wrote at the beginning of one of his compositions: “To be played as fast as possible.” A few measures later he wrote: “Faster.”