[posting at 6pm] Rain gauge at noon on 12/30 – 0.3, It’s been raining off an on and everything is dripping, 46F (*much* closer to normal!!!!), wind at 1-12mph and gusting into the 20’s, AQI 20-52, UV0. Chance of rain 23% today and 5% tonight and it’s going down to below freezing! SMALL CRAFT ADVISORY until 9pm today. Showers should quit around sunrise and we’ll have dry weather Fri/Sat, even if it’s cold, still. There’s a storm rolling in on Sunday with lots of rain and wind. Over 4 inches by the end of Tuesday! The temps will start moderating at that point and from Wednesday on it’ll be showers and temps closer to 50. The Middle Fork Complex Fire is 90% contained and 30841.25 acres. iow. It’s mostly contained, but not out.

Yesterday both of us were pretty tired. Lots of ducks in the Eckman outflow and the crane was out by the river in one of the nameless inlets. I had Tempus sleep most of the afternoon after he ran errands. Of course, my packages haven’t hit the PO, yet. <sigh> Hopefully, they’ll be there this morning. I spent a lot of the day doing computer housekeeping. I’m way behind on messages and photos and such. I had been hoping to get help with the plants, but he was just too whacked.

Raven (Arthur’s wife) has gone down with COVID. They’re vaxxed and boosted and have been masked consistently and boom, a couple of hours on a plane…. That’s how contagious this new variant is. Hospitals are bracing for a spate after holiday visits. At least her folks are docs and she’s got folks to take care of her. They’re out there for the holiday. She got out to hike with her dad today, so she’s feeling better. There’s an adorable vid of Arthur and Sioned playing in the leaves, too. 🙂 I don’t know if you’ll be able to see it from this link, but I hope so. https://www.facebook.com/arthur.m.bartlett/videos/293792806028434

…and the runaway-laundry-hamper aka Sioned.

We’re heading home on time and I’m hoping to eat and go splat. I need to finish the rag doll (it’s got the weirdest hair, oughta be fun) so I can start sending things out today, or at least packing them up.

Today we’re going to close at 4pm. Tempus needs a good long nap if he’s going to be out past two. Mostly he ought to miss the partyers, but you never know…. Hoping you have a good New Year celebration and a better, healthier, happier New Year!

Today’s Plant is Coltsfoot, Petasites frigidus var. palmatus. One of the best cough remedies out there, this is often smoked to help cases of chronic bronchitis and asthma. It is also made into cough syrups often combined with horehound. This is another plant where the medicinal and magickal uses seem to go together. Feminine, Venus, water– Add to love sachets and use in spell of peace and tranquility. The leaves, when smoked, can cause visions, and aid with breathing problems. .More here:http://en.wikipedia.org/wiki/Petasites_frigidus

Part of the reason that I’ve heard of this is that Babicka and Dedi (my grandparents) used to talk about the “SIEVE-est-er” (their pronunciation was interesting) which was a costume party held by the Czech community in Baltimore in late January. At various times the “uncles” (Dedi’s brothers and cousins) came up with some impressive outfits, including a clock that worked, a “rooster” that ran around laying eggs, a house on chicken legs and a two-person horse. This one was the big hit because they made balls of newspaper painted brown and the horse, after running around the dance floor, swishing its tail, backed up to the most pompous woman in the room and dropped them out the hind end of the horse into her lap!

The shop opens at 1pm! Winter hours are 11am-6pm Thursday through Monday, Holiday hours Closing on 12/31 at 4pm. Closed on 1/1. Need something off hours? Give us a call at 541-563-7154 or Facebook or email at ancientlight@peak.org If we’re supposed to be closed, but it looks like we’re there, try the door. If it’s open, the shop’s open! In case of bad weather, check here at the blog for updates, on our Facebook as Ancient Light, or call the shop.

Waning Moon Magick – From the Full Moon to the New is a time for study, meditation, and magic designed to banish harmful energies and habits, for ridding oneself of addictions, illness or negativity. Remember: what goes up must come down. Phase ends at the Tide Change on 1/17/22? Hecate’s Brooch – 3-5 days before New Moon – Best time for Releasing Rituals. It’s the last few days before the new moon, the time of Hecate’s Brooch. This is the time that if you’re going to throw something out, or sweep the floors, or take stuff to Good Will, do it! Rid yourself of negativity and work on the letting go process. Release the old, removing unwanted negative energies, addictions, or illness. Do physical and psychic cleansings. Good for wisdom & psychic ability. Goddess Aspect: Crone – Associated God/desses: Callieach, Banshee, Hecate, Baba Yaga, Ereshkigal, Thoth. Phase ends at the Dark on 1/1 at 1:33am.

Red-letter day – Mars and the Moon give 2021 a grand send-off in Scorpius, where they hang near the famously red-hued star Antares.

The Moon and planets are aligning to give 2021 the perfect sendoff, regardless of whether your preference is to get up early or stay out late. First, our satellite passes 0.9° south of Mars at 3 P.M. EST. Both are visible several hours earlier this morning, just 4° apart in the southeastern sky an hour before sunrise. Look especially for a hint of earthshine — sunlight reflecting off our planet to illuminate the portion of the Moon’s face still in shadow — on the delicate crescent Moon. Mars’ magnitude 1.5 disk now sits just over 5° northeast of Antares. Together with the Moon, the three form a small isosceles triangle on the sky. 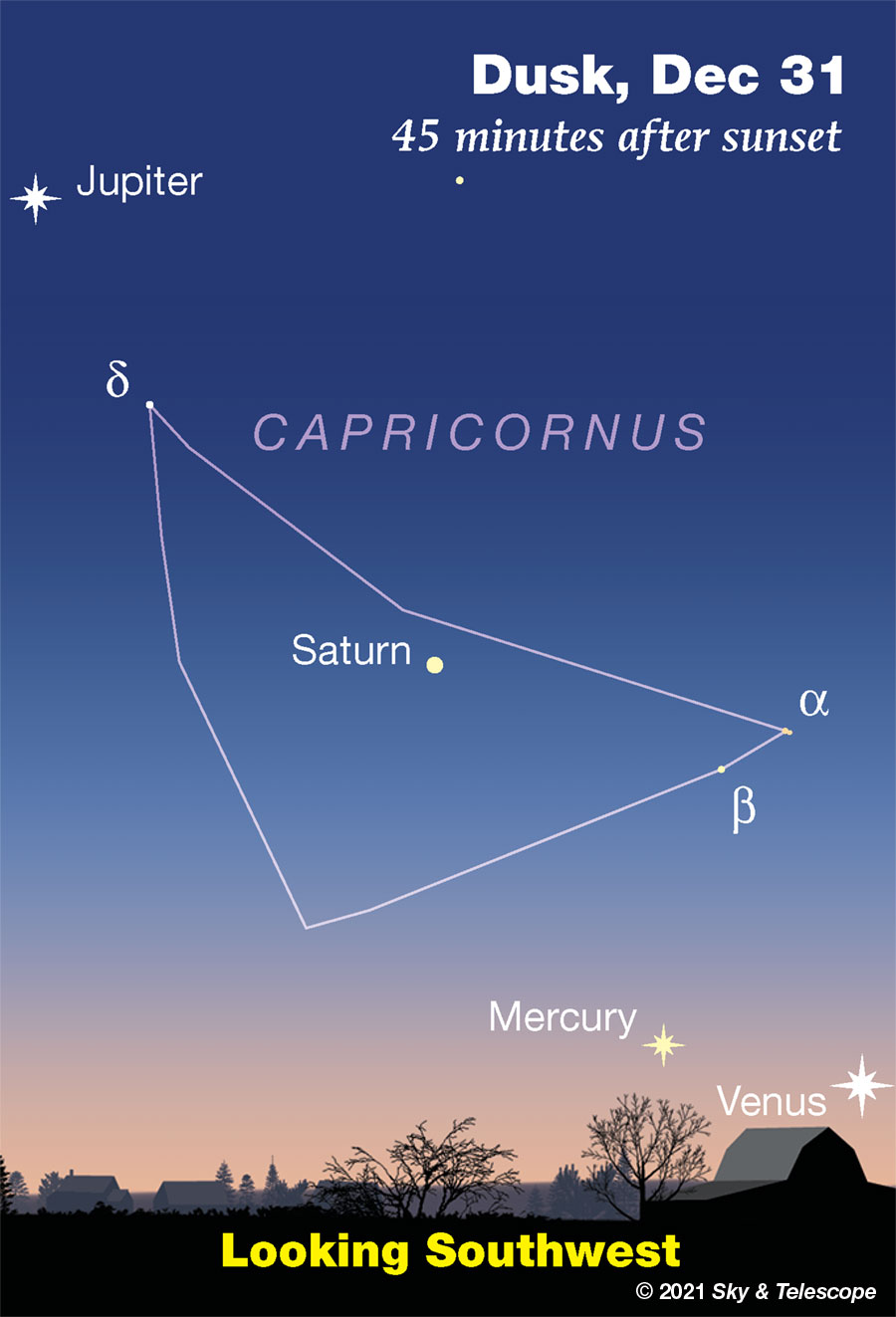 Four planets light the southwestern twilight now that Mercury is up in good view. But Venus will fast drop away.

If evening viewing better fits your New Year’s Eve plans, there are four naked-eye planets now congregating in the dusk sky, setting slowly after the Sun: Venus, Mercury, Saturn, and Jupiter. Magnitude –4.3 Venus now stands lowest on the sky, 11° high at sunset. Mercury, at magnitude –0.8, is 1° higher. Saturn, still magnitude 0.6 in Capricornus, is nearly 19° due east of Venus. Wait for a darker sky to catch its largest moon, Titan, floating just over 1′ to the ringed planet’s southeast tonight. Finally, highest in the sky in Aquarius, magnitude –2.1 Jupiter is just over 18.5° east of Saturn and sits 35° high at sunset. It is nearly even with bright Altair in Aquila, some 40° northwest of the planet and the first of the Summer Triangle’s three stars to set tonight, around 7:45 P.M. local time. The Triangle’s other two stars are gone by midnight — a far cry from the height of summer, when they fly high overhead at this time.

After the noise and cheering at the turning of midnight tonight, step outside into the silent, cold dark. Shining high in the south will be Sirius, with the other stars of Canis Major to its right and below it. Sirius is the bottom star of the bright, equilateral Winter Triangle. The others are Betelgeuse in Orion’s shoulder to Sirius’s upper right, and Procyon the same distance to Sirius’s upper left. The Triangle stands upright, just about in balance. Happy New Year. No Moon or planets grace the midnight sky.

Neptune and Uranus are also up tonight — the former in Capricornus and magnitude 7.8, and the latter in Aries at magnitude 5.7. Both make great targets for binoculars or a telescope if you’re looking to round out your last solar system tour of the year. Uranus (magnitude 5.7, in Aries north of the head of Cetus) is very high in the southeast in early evening. See Bob King’s story and finder chart. Neptune (magnitude 7.9, in Aquarius) is less high in the south-southwest after dark.

Affirmation/Thought for the Day – Tough times never last, but tough people do.

Journal Prompt – Wiki – Just a spoonful of what makes the medicine go down?

~   The way you see people is the way you treat them, and the way you treat them is what they become. – Goethe
~   People discuss my art and pretend to understand as if it were necessary to understand, when it’s simply necessary to love. – Claude Monet (1840-1926) French landscape painter
~   The man says, “If I had a fortune, I’d take good care of it. But I only have a paycheck and I don’t know where it all goes.” Wouldn’t you love to have him running your company? – Jim Rohn
~   There is a theory which states that if ever anyone discovers exactly what the Universe is for and why it is here, it will instantly disappear and be replaced by something even more bizarre and inexplicable. There is another theory which states that this has already happened. – Douglas Adams in The Hitchhiker’s Guide to the Galaxy

Ring out the old, ring in the new,
Ring, happy bells, across the snow:
The year is going, let him go;
Ring out the false, ring in the true. – –Alfred, Lord Tennyson, English writer (1809–92)

To Wish you Peas and Hominy in the New Year! Tempus’ favorite pun, and it’s tasty!

What Is Hoppin’ John?

What Is the History of Hoppin’ John?

Anja’s mulled wine – This is a favorite for big groups.

Silliness – This was recently in the Seattle Paper… The title of the article was “Best Come-Back Line Ever.”

On Monday, at the County courthouse, Aylor was charged with lewd and lascivious behavior, public indecency, and public intoxication.

The suspect explained that as he was passing a pumpkin patch on his way home from a drinking session when he decided to stop, “You know how a pumpkin is soft and squishy inside, and there was no one around for miles or at least I thought there wasn’t anyone around” he stated in a telephone interview.

Aylor went on to say that he pulled over to the side of the road, picked out a pumpkin that he felt was appropriate to his purpose, cut a hole in it, and proceeded to satisfy his alleged ‘need.’  “Guess I was really into it, you know?” he commented with evident embarrassment.

In the process of doing the deed, Aylor failed to notice an approaching police car and was unaware of his audience until officer Brenda Taylor approached him.

“It was an unusual situation, that’s for sure,” said officer Taylor. “I walked up to Mr. Aylor and he’s just banging away at this pumpkin.”

Officer Taylor went on to describe what happened when she approached Aylor.

“I said, “Excuse me sir, but do you realize that you’re having sex with a pumpkin?”

He froze and was clearly very surprised that I was there, and then he looked me straight in the face and said…..