Monday evening was mostly catching up. I finished another set of bottles before supper and one after and then we turned in. Tempus headed out at the usual hour, with a lot of grumbling about the wet. 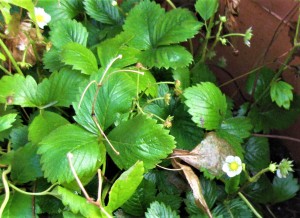 Tuesday was mostly small chores, and putting things away. Bulk route night, so Tempus headed out around 8, and I went to get a nap. After that I started a stew in the crockpot. I alternated working on that with finishing up the crystal bottles (finished!), embroidery and a book until about 4am when everything but the last veg was in the pot. Tempus got in a bit after 8:30.

Dandelion that I harvest for soup greens has a bloom!

When I got up at noon (I’m trying to keep my schedule consistent!) I pulled out the bag of frozen veg, pulled out the peppers that I can’t eat (those went into the compost) and got the rest stirred into the soup, chopped up the chicken and put in some spices. That’s still cooking at home and will be supper.

We headed in to the shop after I got some more weeding done in the garden. We stopped to pick up mail on the way in and while I settled in to messages, Tempus decided to make his special poached egg sandwiches. Mine was delicious! 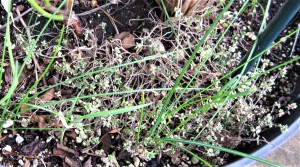 Saffron and thyme with potatoes shoving up behind.

After I get this out we’re heading back home to supper, putting away the leftovers, a couple of small chores and then bed. I’ll probably do more embroidery tonight and I have another stack of books, including a cookbook that I’m a contributor to. 🙂

Today we’re planning to open at 1pm. I’m nearly done with getting the crystal bottles inventoried. I have to set up the re-order list and then I’ll be done with that. If it’s dry I’ll get that other planter box done and if I get up early enough I might be able to get the horseradish dumped so I can harvest and re-plant. 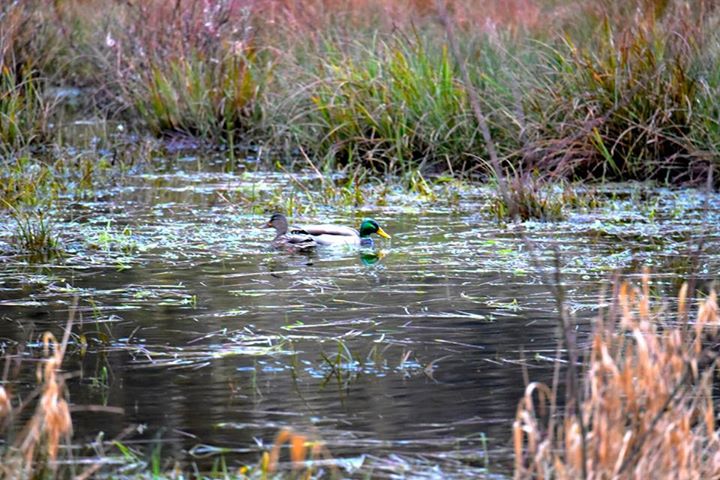 Today’s plant is New Zealand Flax, Phormium Tenax. This is a very different plant from common flax or linseed, Linum usitatissimum. It is used mostly as an ornamental in the northern hemisphere, but at one time sustained a lively trade as a fiber. While the two plants are very different, they have similar magickal properties. These days the fiber is mostly used by paper artisans. – Masculine, Mercury, Fire, Hulda – Money spells, add to coins and carry, flax in the shoe,

averts poverty. >>>> A basket made in our Herbs Workshop of the leaves >>>>> For protection while asleep, add to mustard seed, put both opposite cold water. Protection from evil entering, scatter with red pepper by door. Health and healing rituals, sprinkle altar with flaxseed. More here: http://en.wikipedia.org/wiki/PhormiumFor the traditional uses of the plant fiberhttp://en.wikipedia.org/wiki/New_Zealand_flax

A Day of Remembrance for Oleg the Prophet (Visionary) – Sjechen (February) 3
The Varangian’s (Viking’s) king was a good example of the Rus-Viking. His history is very instructive, yet at the same time mysterious. Volhv of Kiev (a pagan wizard) prophesied to Oleg that his horse would die in battle but afterward he would also be killed. He triumphed under the Byzantines, and after his final battle, his shield was hung on the Gate of Tsargrad in Constantinople. (Volhv: a priest of Slavic Paganism; analogous to the scandinavian “Godhi”) (Tsargrad: The Old Russian name for Constantinople) Wikipedia has an article here: https://en.wikipedia.org/wiki/Oleg_of_Novgorod

Waxing Moon Magick – The waxing moon is for constructive magick, such as love, wealth, success, courage, friendship, luck or healthy, protection, divination. Any working that needs extra power, such as help finding a new job or healings for serious conditions, can be done now. Also, love, knowledge, legal undertakings, money and dreams. Phase ends at the Tide Change on at 2:16 at 8:56am. Diana’s Bow – On the 3rd day after the new moon you can (weather permitting) see the tiny crescent in the sky, the New Moon holding the Old Moon in her arms. Begin on your goals for the next month. A good time for job interviews or starting a project. Take a concrete step! God/dess aspect: Daughter/Son/Innocence – Associated God/dess: Vesta, Horus. Phase ends at 9:46am on 2/5. 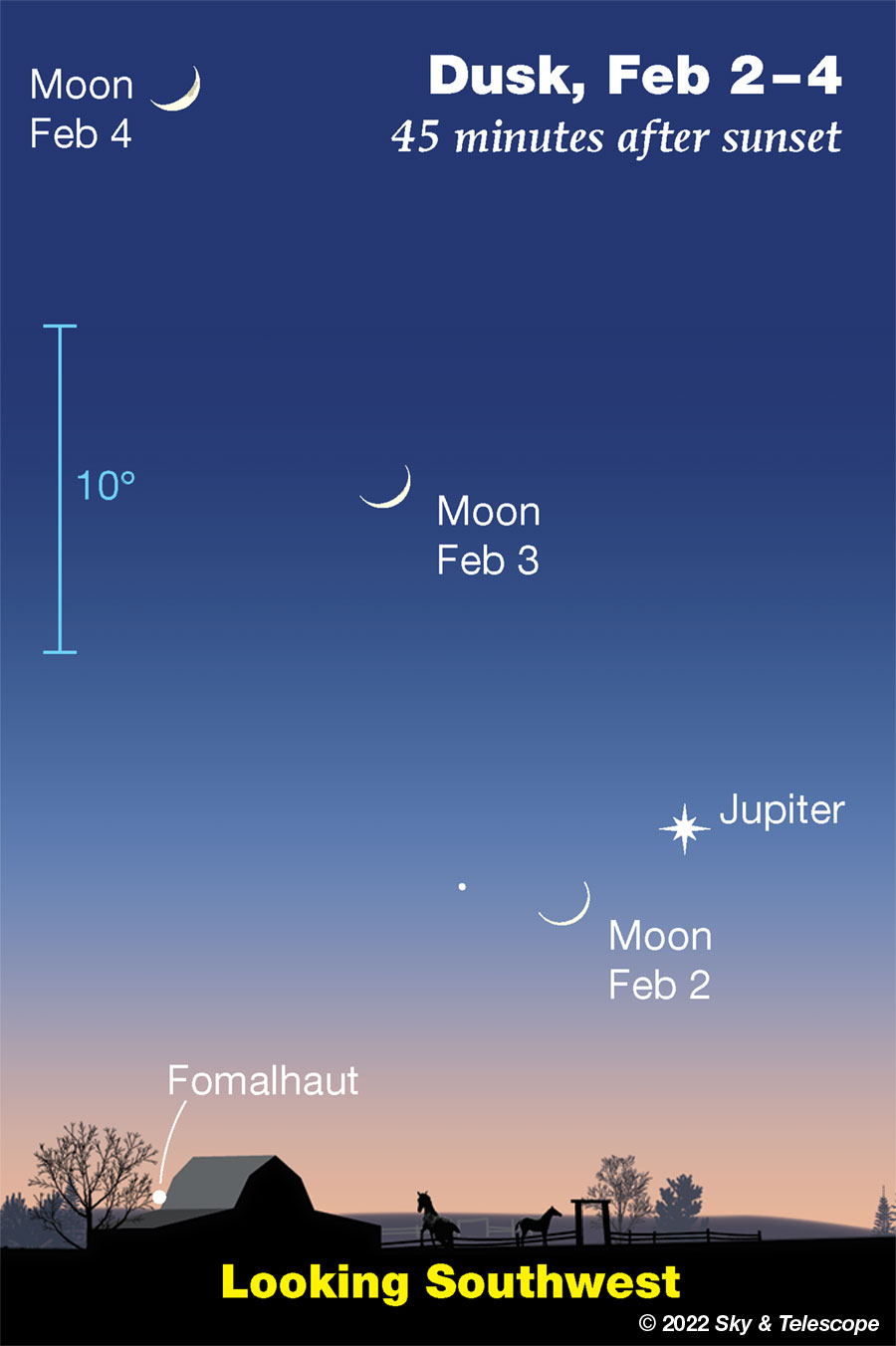 Look low in the southwest for the Moon pairing up with Jupiter, the “false Evening Star” (it tries to match Venus when it’s in this part of the sky, but it always falls short). At dusk in the North American time zones, the Moon and Jupiter are 4° or 5° apart. That’s about the width of two or three fingers at arm’s length. How early after sunset can you begin to see them? This evening and tomorrow evening in twilight, the curved outer edge of the crescent Moon aims nearly at Jupiter like a bow shooting an arrow at it. The Moon passes 4° south of Jupiter at 4 P.M. EST, signaling one of the last, best views of this giant planet before it becomes hard to spot by next week. Turn west as soon as the Sun sets and the sky starts growing dark to find the pair in Aquarius. You’ll want to be quick — an hour after the Sun sets, they’re less than 10° high. Jupiter blazes a bright magnitude –2, hard to miss in the twilight. The Moon, which appears to Jupiter’s lower left in the sky, is a mere 4 percent lit, with just its eastern limb on display. Zoom in on the planet with a telescope and you’ll see that all four of its Galilean moons are on display. Ganymede sits alone to Jupiter’s east, while (from closest to farthest) Io, Europa, and Callisto stretch out to the west. If your seeing (atmospheric steadiness) is good enough, you may also be able to make out the alternating light and dark bands of Jupiter’s cloud belts on the planet’s 34″-wide disk. Your chances will be better earlier in the evening, before this target sinks too low into the thicker atmosphere near the horizon.

The delicately waxing Moon passes 4° south of Neptune at 4 P.M. EST. Look west as soon as the sky is dark to spot our solar system’s farthest planet, where it’s still in roughly the same configuration with our satellite. Neptune glows a dim magnitude 7.9, so you’ll want binoculars or a telescope to spot it in eastern Aquarius. You can use the 6th-magnitude star Phi (ϕ) Aquarii to guide you once you’re close — tonight, this star sits 1.5° due south of the planet. When you do find Neptune, expect to see a “flat,” dim star. Look closely and you may be able to determine that it isn’t a star at all, which would appear as a pointlike source. Instead, the planet shows off a tiny disk just 2″ wide. 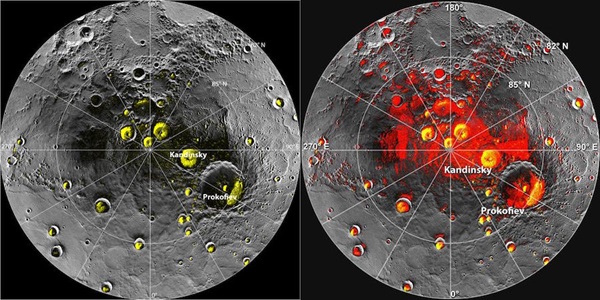 The MESSENGER spacecraft first flew by Mercury in January 2008, before going into orbit around the solar system’s innermost planet between 2011 and 2015. These images created with MESSENGER data provide some of the strongest evidence to date for the existence of water ice and frozen volatiles trapped in Mercury’s shadowed polar craters. – NASA/JHUAPL/Carnegie Institution of Washington/NAIC, Arecibo Observatory/Science Source

Mercury is stationary at 5 P.M. EST in Sagittarius. After today, it will begin quickly tracking east against the background stars.

Mars, vastly fainter at magnitude +1.4, glimmers to the right or lower right of Venus in early dawn. They’re about 10° apart on the morning of January 29th, closing a little to 8° by a week later. Mars, Venus, and Mercury are all in Sagittarius. Brighter Antares in Scorpius shines some 25° upper right of Mars. Below Mars are fainter stars of the Sagittarius Teapot. Mars is on the far side of its orbit from us, so in a telescope it’s just a tiny blob 4.3 arcseconds wide. Be patient; Mars is on its long, slow way to opposition next December, when it will reach an apparent diameter of 17 arcseconds.

Runic half-month of Elhaz/Algiz, from 1/28-2/11. This half month: optimistic power, protection and sanctuary. 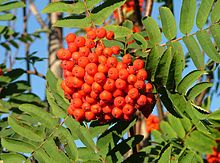 Affirmation/Thought for the Day – Be thankful for each and every morning. Enjoy life and worry not about things that wouldn’t matter in 10 years anyway.

~   Talent is helpful in writing, but guts are absolutely essential. – Jessamyn West
~   The element of fire is about transformation. Be the fire that changes everything that it touches. – Kerr Cuhulain
~   The only way to deal with an unfree world is to make yourself so absolutely free that your very existence is an act of rebellion. – Albert Camus
~   The prestige of government has undoubtedly been lowered considerably by the Prohibition law. For nothing is more destructive of respect for the government and the law of the land than passing laws which cannot be enforced. It is an open secret that the dangerous increase of crime in this country is closely connected with this. – Albert Einstein (1879 – 1955); USA: the 18th Amendment (Prohibition) was passed on January 16, 1919

Preheat oven to 375º. In a stovetop to oven-safe casserole dish with a lid, sauté onions and garlic until translucent and browned. Add mushrooms and cook until tender. Add barley, basil, salt, pepper and stock. Bring to a boil.

Cover and put in oven. Cook until barley is tender, about 45 – 50 minutes. Toss with parsley and serve.

While working at a pizza parlor I observed a man ordering a small pizza to go.
He appeared to be alone and the cook asked him if he would like it cut into 4 pieces or 6.
He thought about it for some time before responding.
“Just cut it into 4 pieces; I don’t think I’m hungry enough to eat 6 pieces.”