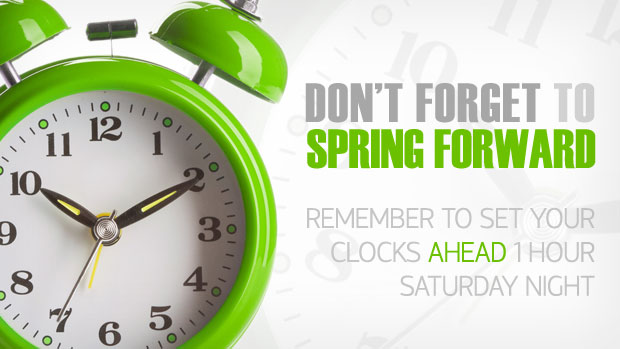 There was a tiny shoot in the dahlia bundle. It got planted in the parsley pot because both of those froze away. I think those are garlics coming up in the pot and one bittercress.

Thursday’s writing was just nutz…. I got it done, but….

The lovage has come that far in 24 hours!

By the time we were heading home…. 7-ish… I was pretty wiped. Tempus got himself some supper out of a can and then I found some leftovers that were still good, so we got fed, but I just about fell into bed after that and slept until midnight. I poked about, getting myself completely awake, getting a cup of tea and a snack. Once I stopped yawning, I got started on the grocery box.

Oregano (and bitter-cress, that’s going away for soup!)

We decided to try MisFits market. Looking at this first box, we’ll probably keep it up for a few weeks, but then quit. The prices are good …for organic produce, which we rarely buy… but not for our standard groceries, but it’s nice to have some fresh stuff and a few of the things…. like a bag of dried apricots… are way below what we’d usually pay. 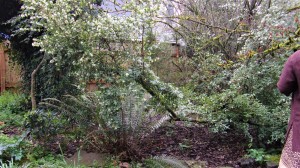 I had a bunch to process, though. A fennel bulb got separated into the bulb (which will be simmered in wine for a vegetable, prosperity) and the fronds (optimism and health) which will be added to sausage, although I’m going to nab one handful for baked chicken. The rest will be chopped in beef broth (from our cook-up 3 days ago and frozen in small lots. I cut some chives when we got home and turned those into a garlic and chive butter (weight loss). I pulled some small sweet potatoes (going to air-fry like home fries) and a bag of yellow potatoes and put those aside. I set up a batch of lime peel to dry and a quart of lime-water (peace of mind) to add to my drink bottles. I need to cook the pears (longevity and wisdom), fairly soon, since one is bruised. Maybe I’ll just cook that one with the apple that’s starting to wrinkle. Hmm… I also had the mushroom catsup draining. By the end of the evening I had the pulp into the dehydrator and 90% of the broth drained. I have to finish that this evening. The dehydrator’s been running all day at home. Tempus got in around 9, again.

Yesterday the sky was beautiful. It was all cirrus and mackerel sky against a lovely blue. The blue reflected on the river and the shores are starting to green. All the little inlets were mostly dry, it was that time of the tide, and you can see where the grass is starting to green near the roots. 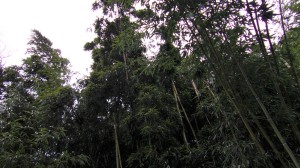 More Bamboo, that stuff is *tall*!

The shop wasn’t busy. We had some friends stop by to chat and a fellow who was very into sacred geometry. Other than that it was just “lookers”. I was hunting miniatures and fell down a rabbit hole into mini-books. Bad Anja! No time to work on those! …but I did get a few papers printed and some windows that are just right for the …. I’m going to call it a diorama…. 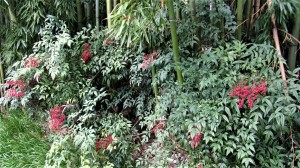 By the bamboo. This is Nandina, also called Heavenly Bamboo, but it’s not a bamboo at all!

There’s going to be more cookery tonight. I have beets (physical connections and hope of prosperity) to turn into beet/horseradish (chasing away bad luck) relish. That’s yum with cheese on a sandwich, and wonderful with ham. I have the papers to start on my diorama and more embroidery, plus I really should make a cover for the tablet.

Buds on a bay tree

Today we’ll be open at 1pm. Sewing Workshop, 3pm. That might be doing the handwork on the tablet cover, if I get that far, or maybe I’ll still be working on bookmarks. Bring a project or a question or your mending and will sit and get things done! I’m also at the point of needing to water plants again.

Today’s Plant is the Buttercup that flourishes in my area in two types, Ranunculus bulbosus (sometimes called. St Anthony’s Turnip) http://en.wikipedia.org/wiki/Ranunculus_bulbosus and Ranunculus repens,   http://en.wikipedia.org/wiki/Ranunculus_repens (called creeping buttercup or crowfoot) which is the variety in my garden. These are non-native plants and invasive, but not usually worried about too much, since they usually grow in grasslands and very poor soil, not suited for agriculture. Although the fresh plant is poisonous, the sap being used as a blistering agent for gout and rheumatism, the dried plant is safe for consumption. Tinctures of this plant have been used on shingles and infusions for “soremouth”. – Masculine, Mercury (Uranus), Fire– These are used in spells for tenacity & stubbornness, both to create and cure, and as a plant of fertility, possibly being the plant that the Flora gave Juno to use to get pregnant with Mars. Carry in sachets (dried flowers only) for fertility or the dried leaves for tenacity. This is also used for harmony and for Sight (and called Frog’s Foot) Use buttercup flower petals in magickal potpourris for spells regarding: divination, energy, innocence, prosperity, youth. Use buttercup in solar spells involving energy and prosperity.

Today’s feast is the Martyrdom of Hypatia. She was a woman who would become a target of anger that grew out of a civil/religious feud in Alexandria in the Nile Delta. Daughter of Theon, and a teacher trained in the philosophical schools of Plato and Plotinus, she was admired by most men for her dignity and virtue. Of the anger she provoked among Christians, Scholasticus writes, Hypatia ultimately fell “victim to the political jealousy which at the time prevailed”. Of course, to many of the People of the Book, a woman in her position, doing the things that she did at that time, was really wrong…. A lot of things have been made up about her, the idea of a woman single-handedly trying to save the “Library of Alexandria” being quite romantic, but those tales are general untrue. There is a Wiki article with more info here: http://en.wikipedia.org/wiki/Hypatia and the movie “Agora” that came out a few years ago is reasonably accurate.

Waxing Moon Magick – The waxing moon is for constructive magick, such as love, wealth, success, courage, friendship, luck or healthy, protection, divination. Any working that needs extra power, such as help finding a new job or healings for serious conditions, can be done now. Also, love, knowledge, legal undertakings, money and dreams. Phase ends at the Tide Change on 3/18 at 12:18am. Waxing Gibbous Moon – From seven to fourteen days after the new moon. For spells that need concentrated work over a ¼ moon cycle this is the best time for constructive workings. Aim to do the last working on the day of the Full moon, before the turn. Keywords for the Gibbous phase are: analyze, prepare, trust. It is the time in a cycle to process the results of the actions taken during the First Quarter. During this phase you are gathering information. Give up making judgments; it will only lead to worry. Your knowledge is incomplete. Laugh. Analyze and filter. LOOK WITHIN. God/dess aspect: Maiden/Youth, but in the uncommitted phase, the Warriors – Associated God/desses: Dion, Dionysius, Venus, Thor. Phase ends at the Full on 3/16 at 12:18pm.

The waxing gibbous Moon passes under the heads of Gemini.

Pollux and Castor accompany the Moon across the sky tonight, as shown above. Pollux is the one closest to it. Down below this group is Procyon. Lower right of Procyon shines brighter Sirius.

Daylight-saving time begins at 2 a.m. tonight for most of North America. Clocks spring forward an hour.

The Ring Nebula – The famous Ring Nebula (M57) resides in Lyra the Harp. This long exposure (more than 19 hours total) includes Hydrogen-alpha data to reveal features invisible through even the largest telescopes used for visual observation. – Bob and Janice Fera

Venus passes 4° north of Mars at 9 A.M. EST this morning. You can catch them a few hours earlier, some 10° high in western Capricornus an hour before sunrise. Venus is a brilliant magnitude –4.6 and spans 27″ in a telescope, showing off 45-percent-lit disk. To its lower right is Mars, a much fainter magnitude 1.2 and just 5″ across, unfortunately rendering any planetary features difficult to see. Shortly after 5 A.M. local time, a third planet has risen. Magnitude 0.7 Saturn now sits in central Capricornus, 15.5° east of Mars and 4° west of 3rd-magnitude Deneb Algedi, which follows the planet up into the twilight before disappearing in the brightening sky. Train a telescope on Saturn in the growing dawn for a glimpse of its stunning ring system, stretching roughly 36″ from end to end. Take care to put down the telescope several minutes before the Sun is set to rise at your location.

Mercury, Jupiter, and Neptune are out of sight in the glare of the Sun.

Affirmation/Thought for the Day – Every time you get the urge to move, get up and move!

Journal Prompt – Wiki – What do you feel is your greatest success?

~   Don’t find fault. Find a remedy. – Henry Ford
~   Your second-hand bookseller is second to none in the worth of the treasures he dispenses. – Leigh Hunt (1784-1859) English writer
~   Well done is better than well said. – Benjamin Franklin
~   If you are out to describe the truth, leave elegance to the tailor. – Albert Einstein

Mix egg whites, flour, and cornstarch in a small bowl to form batter. Cover apples with batter. Fry in oil over medium heat until golden brown.

Silliness – How far did you move it? 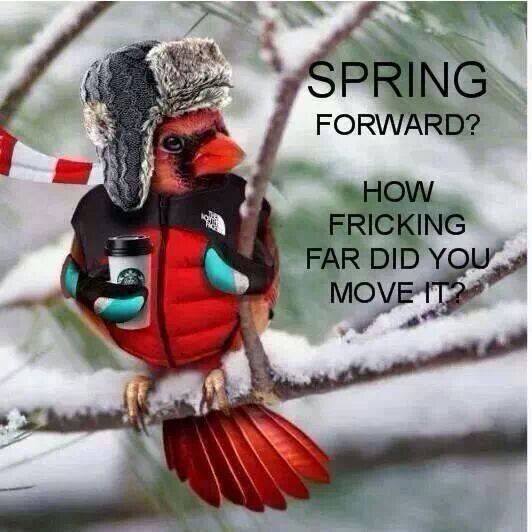