Saturday evening was another late one. I got my soup right away when we got home. Tempus did something else, no clue what, although he was musing about chili. He worked on my hotpad/toe warmer and we decided it’s “dead, Jim, dead”, so it’s coming back to the shop for a good burial. 🙂 I crawled into bed even before he started eating, read for about 10 minutes and collapsed.

Adding some wee brussels sprouts to the onion, carrot, cuke and parsnip mix.

When I woke around midnight, he was curled up and snoring, and rather reeked of peppers. 🙂 I got a snack and settled down with my quarters. I finally finished up the ones that I had at home, so I have to bundle up the ones still at the shop. I have all of the “D” state quarters except for the territories, finally, and I’m well into filling the State Parks book, too! …There…. got all the ones from the drawer, now that I’m thinking of it….

After that I had a little mending. I don’t know how I manage to pull side seams on some of my dresses. It doesn’t really make sense. I set up the pretty rainbow carrots with some parsnip rounds and 1/2, tiny brussels sprouts with onions in a pickling broth. I think I might add some carrot and a bit of garlic juice tonight. After that I took my book and embroidery to bed with me. I didn’t get very far.

The lovage is nearly a foot tall! That’s even after harvesting some for soup!

I got another nap and then decided to repeat the Metta section of the Ostara ritual, then went back to sleep. Tempus got in late (but usual for Sunday) and I woke with the alarm, read the Sunday paper, then got him up. I went out and planted a celery root section and the butts from the carrots for re-growing. If you’ve never done that, it’s a good way to get a variety of tender greens that are usually expensive at the grocery. If you have a pot that’s at least 8 inches deep, with good drainage, you can plant root veg butts (turnip/parsnip/onion/shallot/lettuces/cabbage/bok choy/carrot/etc.) about 2 inches apart. Celery and a couple of other things will also re-grow, although not radishes, and even sprouted potatoes. It’s worth experimenting. 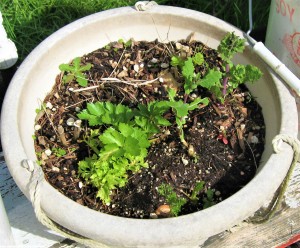 Some re-grows. The center is the celery that got cut back to nearly nothing last week!

Once we were at the shop I started working on pictures, getting them cleaned up for the report and for here. I talked to a few folks, then worked on plants for a bit, then sat back down to write.

Some leek and beet re-grows. Beets are just getting started.

I’m probably going to make a nuker casserole for supper tonight. I’m hoping to get Tempus to try the air-fryer brussels sprouts, too. I’ll be working on quarters again, and embroidery, and if it’s light enough, maybe I’ll get a few minutes in the garden, too.

Today is back to our normal stuff. Plants, books, inventory. I’m hoping to get Tempus to scrape up some of the spilled garden soil by the plants in the north window, and condense stuff, so we can start getting the rollies out of the way. That mess back there, was supposed to be temporary! 🙂 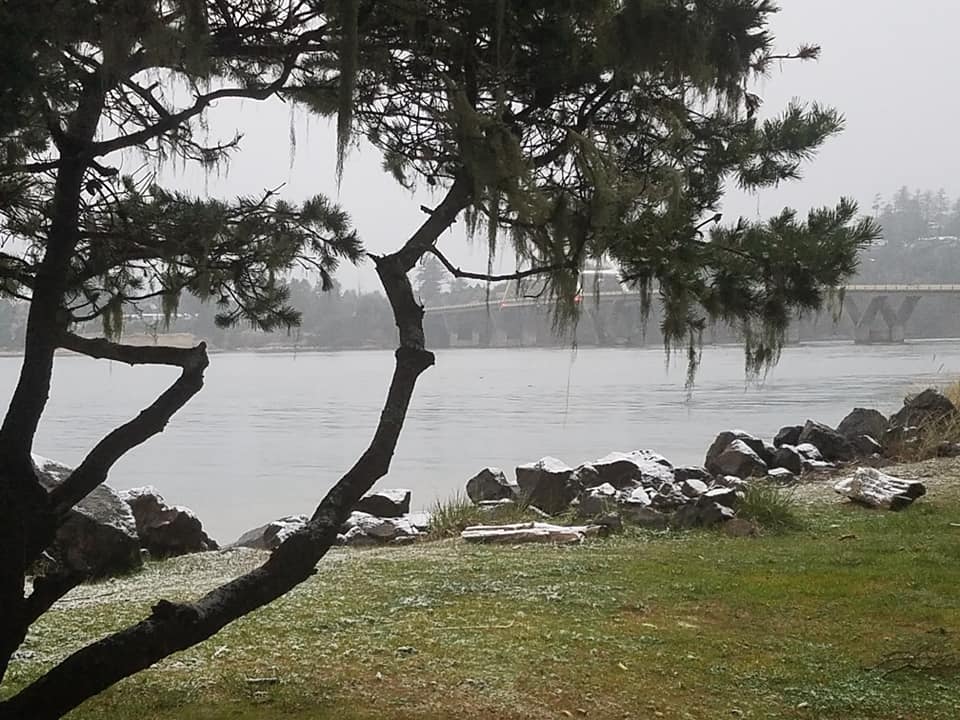 Collected on Facebook, the last of the snow in March of 2019.

Today’s Plant is Gillyflower, Clove Pink, Carnation, all names that are used for, Dianthus caryophyllus. This plant has been hybridized to the point where the basic flower and the florist’s varieties (which are all that show up in the article….) don’t look a bit alike, although they keep the scent. These also make a yummy tea. Even a single flower in a cup of green tea is enough! There is a lot of symbolism to the flower, depending on which culture you’re in, although they generally are thought to mean love, fascination, and distinction. They were used particularly in crowns of victory in ancient Europe. – Masculine, Sun, Fire, Jupiter – All-purpose protection, in healing for strength and energy (so perfect for hospital bouquets!) and for healing of broken hearts, add red, rather than pink blossoms. White are occasionally used for the protection of children or those who travel. Dried petals make a great addition to sachets, potpourris or incense since they strengthen the properties of other plants and herbs.http://en.wikipedia.org/wiki/Dianthus_caryophyllus

Zlaty Amos, the Czech Teachers Day, is held annually on the birthday of John Amos Comenius, a famous educator of the middle ages. Czech students nominate the teachers whose approach most motivates and inspires them to the competition Zlatý Ámos (Golden Amos). The coronation of “Golden Amos” (or the “teachers of the year” as we would say in the US) take place yearly on March 28, and yes, they really wear crowns! See more here (website in Czech, but there are pictures) :http://www.zlatyamos.cz/ and on Comenius here:  http://en.wikipedia.org/wiki/John_Amos_Comenius

Waning Moon Magick – From the Full Moon to the New is a time for study, meditation, and magic designed to banish harmful energies and habits, for ridding oneself of addictions, illness or negativity. Remember: what goes up must come down. Phase ends at the Tide Change on 3/31 at 11:24pm. Hecate’s Brooch – 3-5 days before New Moon – Best time for Releasing Rituals. It’s the last few days before the new moon, the time of Hecate’s Brooch. This is the time that if you’re going to throw something out, or sweep the floors, or take stuff to Good Will, do it! Rid yourself of negativity and work on the letting go process. Release the old, removing unwanted negative energies, addictions, or illness. Do physical and psychic cleansings. Good for wisdom & psychic ability. Goddess Aspect: Crone – Associated God/desses: Callieach, Banshee, Hecate, Baba Yaga, Ereshkigal, Thoth. Phase ends at the Dark on 3/29 at 11:24am. 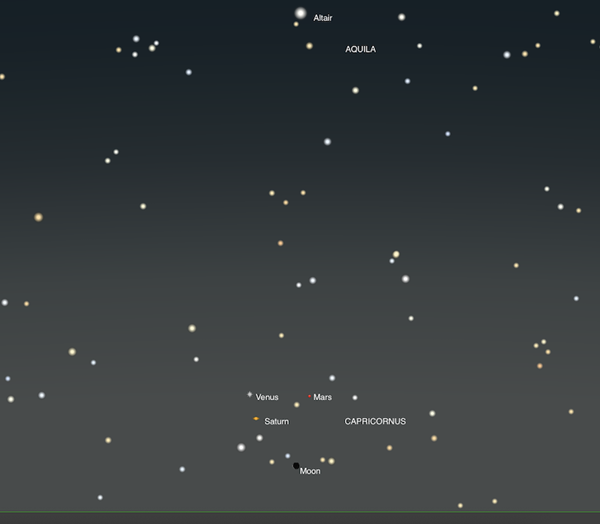 Return to the predawn sky today and note how far our Moon has moved — it’s now in southeastern Capricornus, a little over 5° south of Saturn, appearing to the lower right of the planet in the sky. The Moon passes 7° directly south of Venus at 6 A.M. EDT, then proceeds to slip 4° due south of Saturn at 8 A.M. EDT. 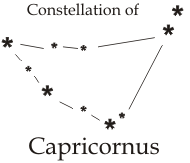 The Moon starts off a several-day spate of planetary passes by sliding 4° south of Mars at 11 P.M. EDT tonight. Of course, all the visible planets (save Uranus) are currently in the morning sky, so you can instead catch the preshow before dawn. An hour before sunrise, the Moon stands in southwestern Capricornus, rising in the east. Some 14.5° to the left (northeast) of the Moon is a trio of planets: From left to right stand Mars, Venus, and Saturn. (Admittedly, Venus and Saturn form a nearly vertical line in the sky, with brighter Venus above dimmer Saturn.)

Let’s start with the Red Planet, a little less than 11° northeast of the crescent Moon. Mars glows a dim magnitude 1.1 and spans just 5″, revealing little detail through a telescope. You should, however, note its red glow, as sunlight glints off its oxidized (rusty) surface. 5° to the upper left of Mars is Venus, a bright magnitude –4.4 beacon in the morning sky. Its disk spans a much larger 23″ and is just over half lit. Finally, Saturn shines at magnitude 0.7, roughly 2.5° below Venus. A telescope will reveal its famous ring system, stretching some 36″ across. The yellowish disk likely won’t reveal any variation, thanks to its low altitude — the motion of our turbulent atmosphere near the horizon will wash away any detail. 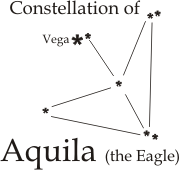 In addition to the Moon and planets, flying above Capricornus in the morning sky, you’ll see the bright star Altair in Aquila. This magnitude 0.8 star is part of the trio of suns in the Summer Triangle, which stands high overhead on short summer nights. It is the 12th-brightest star in the sky and its name appropriately means “the flying eagle” in Arabic, as it anchors the constellation of the Eagle. The star, which is just shy of twice the mass of our Sun, is also a Delta (δ) Scuti-type variable star, experiencing small changes in brightness over timescales that range from a little less than one hour to nine hours. Its brightness only changes by a few thousandths of a magnitude, however — nothing you can pick up by eye.

This is the time of year when Orion declines in the southwest after dark, with his Belt roughly horizontal. But when does Orion’s Belt appear exactly horizontal? That depends on where you’re located. Seen from most mid-northern latitudes it should be close to the end of twilight.

Mars, vastly fainter than Venus at magnitude +1.1, glimmers 5° to 7° to Venus’s right. Venus, Mars & Saturn form three different isosceles triangles (triangles with two equal sides) in the span of just a week: On the mornings of March 24th, 28th, and 31st. Mars in a telescope is a hopeless little fuzzdot 5 arcseconds across. But expect a good Mars opposition next December — when it will be 17 arcseconds wide very high in the midnight sky, not far from overhead.

Runic half-month of Berkana/ Beorc, 3/14-29 Half-month ruled by the goddess of the birch tree; a time of purification for rebirth and new beginnings. Runic half-month of Ehwaz, 3/30-4/13 – Ehwaz, the horse; time of partnership between humans and Nature, as between rider and horse. Nigel Pennick, The Pagan Book of Days, Destiny Books, Rochester, Vermont, USA, 1992, p. 55 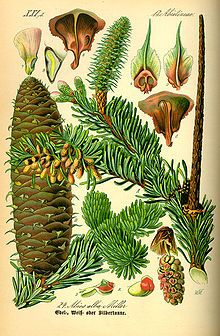 Affirmation/Thought for the Day – Shin: A device for finding furniture in the dark.

Journal Prompt – Auto-Biographical narrative – Tell about a time you laughed until you cried.

~   My interest is in the future because I am going to spend the rest of my life there. – Charles F. Kettering (1876 – 1958), Inventor
~   Great opportunities to help others seldom come, but small ones surround us every day. – Sally Koch
~   Being deeply loved by someone gives you strength, while loving someone deeply gives you courage. – Lao Tzu
~   These intellectual hoboes … – Paul Keating

The brown buds thicken on the trees,
Unbound, the free streams sing,
As March leads forth across the leas
The wild and windy spring. – –Elizabeth Akers Allen (1832–1911)

Gallon Recipe for Pickling broth – This does not make quite a full gallon and amounts are not exact (not for someone who is OCD, anyway). You can boil some more vinegar to top it up or just leave it.

Note – Over time we’ve found that the broth does not need to be stored in the fridge and may keep up to 6 months. Don’t count on it, though. Check the broth *before* you pour it over things! 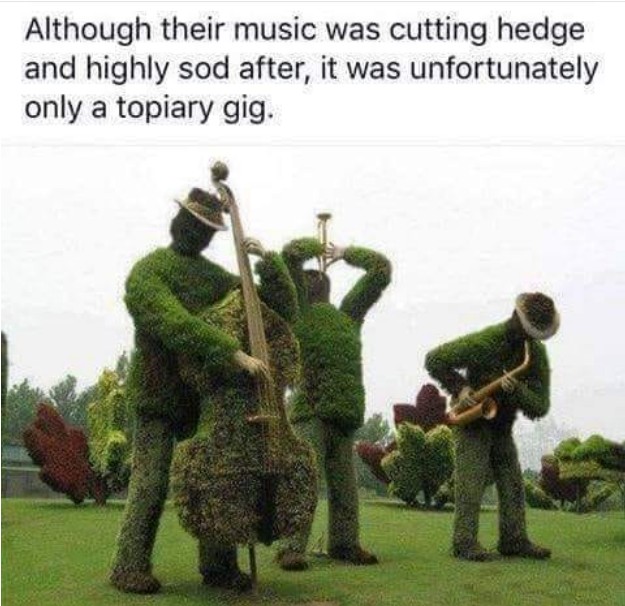