The nasturtium that has crawled into the fairy garden and was waving at me through the window!

No weather or note today. I’m not at the shop! I’ll fill in on Thursday’s newsletter which won’t go out until after I hit the shop at 1pm, and the more I write, the later it will be! I’m going to try to type out the note on the table and send it to myself in an e-mail or something, but I don’t know how well it’ll work….first tries, and all. 🙂

Herbs in the Garden is mostly going to be weeding, although if I have help we’ll also harvest the dock and replant at least one of the other cardoons, plus shifting stuff around so things have enough light. 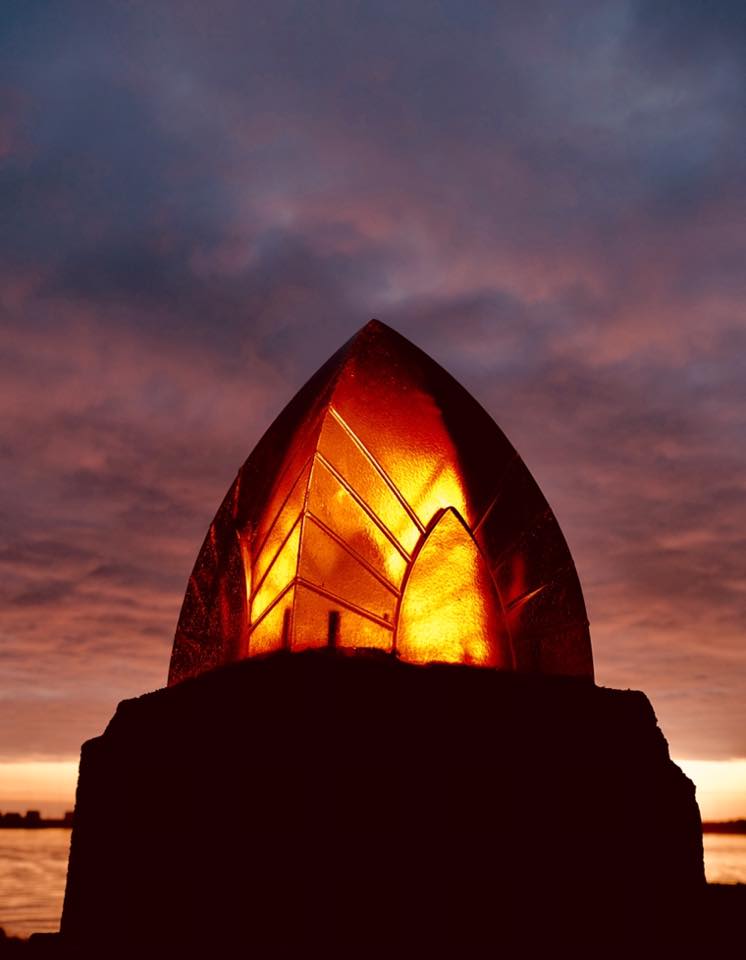 Today’s Feast is in honor of John Barleycorn, the personification of the harvest, the God in the Grain. The song goes back at least to the 16th century, at least in theme, but there are a lot of different versions out there and a lot of recordings, since the theme is an interesting conceit. A lot of people don’t think to break down the last name. “Barley” is obvious, but “corn” is the old word for “grain”, from before maize picked up the name. In the song, the barley grain is taken through the stages of growth, harvest, threshing, malting and being turned into beer as though it’s a person being: “cut off at the knee”, “threshed me skin from bone”, “bunged me in a vat”, etc. http://en.wikipedia.org/wiki/John_Barleycorn A similar Scottish poem from the same time frame refers to “Allane”, (Ale – in) http://en.wikipedia.org/wiki/Quhy_Sowld_Nocht_Allane_Honorit_Be

Today’s plant – Sage, Salvia Officinalis, sometimes called true sage, or culinary sage, is a plant that has been used in cookery, magick and medicine for many thousands of years. It is one of the ingredients in Four Thieves Vinegar. The blossoms make a delicious tea. –Masculine, Jupiter, Air – In purple cloth, brings wisdom. Worn in an amulet sewn into a horn shape protects against the evil eye. Used as a wash, or sniffed, enhances youthful mindset and appearance. Eat sage in May for long life. Carry to promote wisdom. Write a wish on a sage leaf and sleep on it. If you dream of it, it will happen, else bury the leaf in the ground. More here:http://en.wikipedia.org/wiki/Salvia_officinalis

Summer hours are 1-6pm Thurs.-Mon., although we’re often here later as the days get longer. Need something off hours? Give us a call at 541-563-7154 or Facebook message or email at anjasnihova@yahoo.com If we’re supposed to be closed, but it looks like we’re there, try the door. If it’s open, the shop’s open! In case of bad weather, check here at the blog for updates, on our Facebook as Ancient Light, or call the shop.

Moon in Capricorn enters Aquarius at 11:45am.

Waxing Moon Magick – The waxing moon is for constructive magick, such as love, wealth, success, courage, friendship, luck or healthy, protection, divination. Any working that needs extra power, such as help finding a new job or healings for serious conditions, can be done now. Also, love, knowledge, legal undertakings, money and dreams. Phase ends at the Tide Change on 8/11 at 6:36pm. Waxing Gibbous Moon – From seven to fourteen days after the new moon. For spells that need concentrated work over a ¼ moon cycle this is the best time for constructive workings. Aim to do the last working on the day of the Full moon, before the turn. Keywords for the Gibbous phase are: analyze, prepare, trust. It is the time in a cycle to process the results of the actions taken during the First Quarter. During this phase you are gathering information. Give up making judgments; it will only lead to worry. Your knowledge is incomplete. Laugh. Analyze and filter. LOOK WITHIN. God/dess aspect: Maiden/Youth, but in the uncommitted phase, the Warriors – Associated God/desses: Dion, Dionysius, Venus, Thor. Phase ends at the Full on 8/10 at 6:36am. Full Moon – The day of, the day before, and day after the true Full Moon. “And better it be when the moon is full!”! Prime time for rituals for prophecy, for spells to come to fruition, infusing health and wholeness, etc. A good time for invoking deity. FRUITION Manifesting goals, nurturing, passion, healing, strength, power. Workings on this day are for protection, divination. “extra power”, job hunting, healing serious conditions Also, love, knowledge, legal undertakings, money and dreams. God/dess Aspect: Mother/Abundance/Kingship – – Associated God/desses: Danu, Cerridwen, Gaia, Aphrodite, Isis, Jupiter, Amon-Ra. Phase ends on 8/13 at 6:36am. 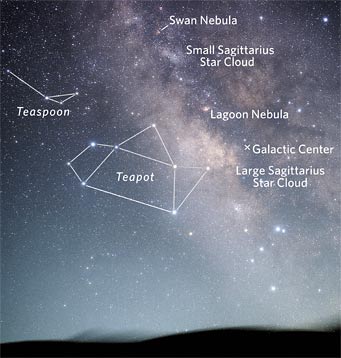 Whenever Vega crosses nearest your zenith, as it does not long after dark now, you know that the Sagittarius Teapot is at its highest due south. Two hours later when Deneb crosses closest to the zenith, it’s the turn of little Delphinus, and boat-shaped Capricornus down below it, to stand at their highest due south. 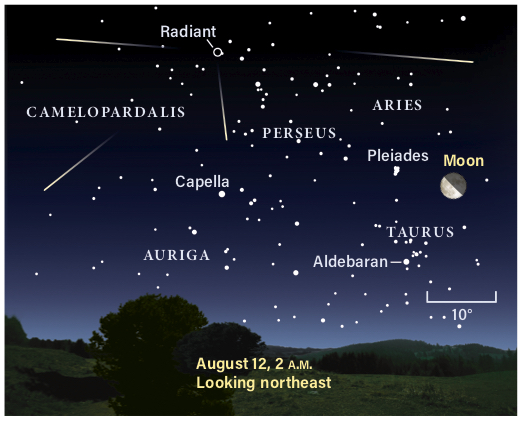 Although it’s still two days before the Perseid meteor shower officially peaks, meteor-watchers will find prospects better this morning than on Friday. That’s because while the bright Moon will dominate the predawn sky later this week, today the Moon sets just before 4 A.M., leaving a good hour of dark skies available to catch shooting stars before twilight interferes. By the time the Moon sets, the shower’s radiant in Perseus the Hero is nearly 60° high in the northeast. Although this is the point from which meteors will appear to originate, you’ll want to concentrate your search on either side of the radiant and slightly away from it, as meteor trains are longer the farther from the radiant they appear. The shower is ramping up to a maximum rate of 100 meteors per hour, so you can expect to see quite a few meteors under good conditions, even with a few days until the peak. 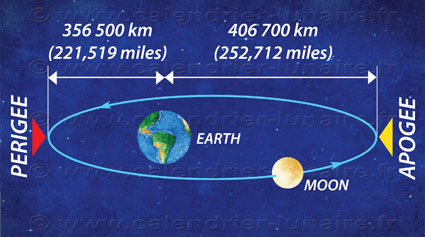 The Moon reaches perigee, the closest point to Earth in its orbit, at 1:09 P.M. EDT. At that time, our satellite will sit just 223,587 miles (359,828 kilometers) away. Its proximity sets the stage for a Super Moon tomorrow when Luna’s phase reaches Full.

Saturn, magnitude +0.4 in western Capricornus, reaches opposition on the night of August 13-14. Spot it very low in the east-southeast in late twilight, higher in the southeast in late evening, and at its highest and best in the south around 1 a.m. Saturn’s rings appear roughly as wide, end to end, as Jupiter’s disk. See “Saturn at Opposition” in the August Sky & Telescope, page 48.

Runic half-month of Thurisaz/ Thorn/Thunor, 7/29-8/12 – Northern Tradition honors the god known to the Anglo-Saxons as Thunor and to the Norse as Thor. The time of Thorn is one of ascendant powers and orderliness. This day also honors the sainted Norwegian king, Olaf, slain around Lammas Day. Its traditional calendar symbol is an axe. Runic half-month of Ansuz/ As /Os/, 8-13-8/29 – This time is sacred to the god/desses of Asgard and contains the time of the Ordeal of Odin and the festival of the Runes. This time is also referring to Yggdrasil, the Tree that give order to the Worlds. This is a time of stability and divine order visible in the world.

Journal Prompt – What does this quote say to you? – The educated differ from the uneducated as much as the living from the dead. – Aristotle

~   Character builds slowly, but it can be torn down with incredible swiftness. – Faith Baldwin (1893-1978) US writer
~   Be a first rate version of yourself, not a second rate version of someone else. – Judy Garland
~   Let’s you and him fight. – Wimpy
~   We now have exactly the same situation as we had at the start of the race, only exactly the opposite. – Murray Walker

Bright, bright, restless bright, through the sun- burnt meads,
Wavers the butterfly ;
Ever across its path a pilot invisible leads
A sylphid fleet of the thistle’s light and feathery seeds,
And August passeth by. – Edith Matilda Thomas (1854–1925)

Silliness – Sniglet – Any word which should be in the dictionary but isn’t. – methylphobia (meth il FO be uh) – n. The fear that you are going to have to pay the one cent you over-pumped at the self-service station.