You Vote! A story about Babička

Babička was Grandma’s mother, my grandmother. When she came to the US she went through a lot, but by the beginning of WWI she had a place as a housekeeper and a great group of friends. One group of young women, whose families had been here for a few generations, took her under their wing, helping her learn a little English in her spare time, taking her shopping with them and to parties and just helping her have fun in her new country.

Some of the girls were active in the Suffrage movement, which went sideways at one point in Baltimore, among other places. Some women were being arrested during the protests and jailed. They went on hunger strikes. The police decided to make an example of them and they were being force-fed. The problem was that no one was being properly careful to make sure the tube was going into their stomachs… Yes, at various points during this whole time, both in England and in the US, women were drowned by the police, some think deliberately, by

putting the feeding tube into their lungs. It’s not something that anyone talks about much and there’s very little online, although I have a couple of links below.

How do I know anything about this? 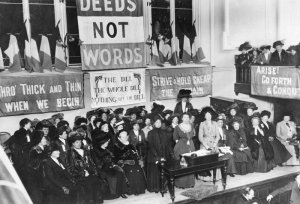 When I was 12, Babicka had my Daddy drive us to a cemetery near where she had lived, when she was doing housekeeping. We were all dressed up, since it was a Sunday, Memorial Day weekend, if I remember right. Baba handed me a little bouquet of flowers with a candle and a red, white and blue ribbon and she had one with a little American flag in it.

Daddy stayed with the car, but Baba took me to a gravesite. I remember that the headstone had an angel on it. She told me the story of her friend’s death, as she understood it, at the hands of the police. She told me then, “Hannah, she die, so you can vote. So, you *vote*. You not forget her.” We set our flowers down and left in tears.

She told me more about Hannah, over time. Apparently, she loved hats and hat shopping and had a thing for lace-trimmed gloves. “She vos chust girl, like you!” They must have bonded over the lace, because Baba really enjoyed crocheting lace, and she was still making lace-trimmed gloves when I was little. 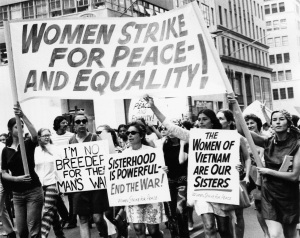 …but Hannah never got to vote. Baba made it clear to me, that it was my duty to do so for her, and to tell others about her, that what had happened would not be forgotten. 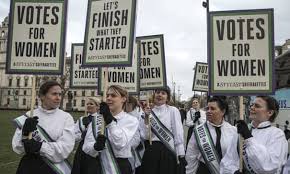 …but over time it has. I’m not even sure that “Hannah” was her name, anymore. That’s what I remember, but I can’t find that name in records and if I ever knew her last name, that’s long gone, too. I’ve had people tell me that those deaths never happened, that the stories were made up to scare women away from the protests.

It’s possible that the story changed in the telling or that details have slipped my mind, but that afternoon in the cemetery is very clear.

I’ve even had some of the young people that have been students in my classes tell me that women were given the right to vote in the Constitution… “Isn’t the 19th amendment part of that?” <sigh> No. It’s not. As all rights that people in power want to reserve to a single sort of person, the 19th amendment was paid for in pain and death.

I’ve had people tell me that they’re aren’t going to bother voting, because “… it doesn’t change anything…” Well, it certainly *doesn’t* if you don’t vote!

One day that sticks in my mind is Election Day of 1976. I was just 18 and Baba was 82, but I drove us to the polling station before I headed for school. Baba kept patting me on the arm, saying, “Is good to vote, neh?” She told everyone “Is grand-daughter, she vote first time! I proud.” “I vote since 1922, I vote.” “Always vote, yes, is duty!” and things of that sort. Hannah couldn’t be there, but we showed up for her!

…and yes, I voted today. Thank you, Hannah!