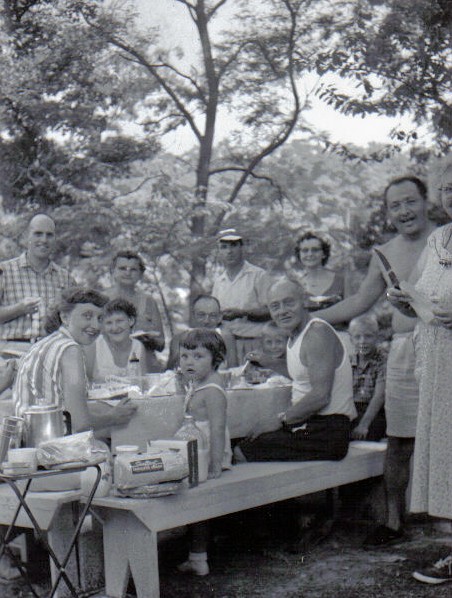 My father, Francisek Picek (Frank) was born in 1894 in Bohemia, then a small backwater of the Austro-Hungarian Empire. His brothers came along with two years between them. Vaclav (Jim) was born in 1896, Antonin (Tony) in 1898 and then Jaroslav (Jiri, Jerry) in 1900.

My 10-year-old father emigrated to America in 1904, with only his mother and father. The three younger brothers were farmed out to unwilling relatives in the old country as Francisek was old enough to take care of Mother Picek and not really old enough to do farm work in Bohemia. There had only been money enough for a few tickets, and the new baby would be born a citizen of the new country. Surely Brother Francis and Mother Picek would be allowed to stay to care for her?

Bozena (Grace of God, Bessie) was indeed born in America, after a small house had been acquired.

Father Picek went back for the rest of the family, but before he could earn enough to begin sending them to Mother, he became ill and then died. The brothers were heard from rarely, postage being expensive, and then War came and they wrote not at all. The Austrian Grand Duke was assassinated in Sarajevo and two brothers were conscripted.

One brother, we learned later, was holed up in an “electrical tent” on a telephone pole in Italy. The other two trekked through Siberia with the Austrian forces. All got through the war without injury and with their military pay, after the creation of the independent Czech state, they finally made their separate ways to America, one at a time. One brother came over in 1919 and each earned enough money for the next. Finally in 1923 they were all reunited in Baltimore.

It took so long because my mother and father had married and had not only to provide for widowed Mother Picek but to provide funds for the brothers’ permissions to enter the country, their tickets and to guarantee their support and livelihood once here in America. Not only that, but I came along in 1920, and then my brother Karel (Charles) in 1922!

The bond of brotherhood, unbroken but strained in childhood, remained strong in adulthood. As elder brother and the best speaker of English in the family, my Dad served as the head of the family and consultant. All deferred to him in matters, political, legal, civil and social – a Starosta* in truth!

The hosi (boys) had lovely Czech-American wives and families and did well with lucrative jobs in business: building-loan, boilermaker and Eskay meats. All became naturalized citizens and ardent Democrats. I had a marvelous family of relatives – nine cousins!

What fun we had; spending summers at the Aurora Club Shore, attending Czech night-school classes and festivities, patronizing the frequent dances and theatricals and, of course, home entertainment. I’ll never forget the four pinochle parties each Christmas, hosted each week by a different brother. I also remember our doorbell ringing very early on Christmas morning with my three uncles bounding up the stairs to my Dad’s room shouting “Vesele Vanoce!”

A favorite January 31 event was the Sylvester or masked ball. Tedious winter hours at home were spent on the “costume.” I remember, as a child, watching the preparations: sewing brown cambric on the skeleton of the horse, pinning feathers on the cardboard rooster, and pricking pins into the face of the cardboard clock for the numbers. These many-times prize-winning works of art were life-size and manned by our men.

The horse is the one that folks most remember. With two brothers inside (and no one ever admitted to being the “hind end”!) it pranced and danced all over the ballroom, nodding its head or stamping its feet and swishing its tail. Every so often though, it would back up to some vinegary matron, or grumpy old man, lift its tail and deposit a “horse ball” in the lap of the unfortunate! They were only painted fabric-covered balls of newspaper, but the roars of laughter echo even to this day.

Yes, despite early childhood deprivation and hardship, humor prevailed. No rancor or venom was ever evinced by any one of the four. There were pranks and silliness and wordplay, especially once my husband, Amor, got involved. There were long story-telling sessions of family history and Czech tales, and when the brothers disappeared out “under the cherry tree” with their glasses of good beer, who knows what fish stories prompted the guffaws!

The brothers had good long lives, all living to see grandchildren, most great-grandchildren and one (Jerry) to see his first great-great-granddaughter! Uncle Jim was the first to go, having a fatal heart attack in his late 60’s, probably brought on by the smoking that they all over-indulged in. Uncle Tony and my Dad both died of lung cancer, Uncle Tony first and then Daddy, a decade later, at the age of 76. Uncle Jerry lived on into his late 80’s, finally succumbing to serious complications from drug interactions that poisoned his systems; too many medications, too many doctors and lack of oversight in the nursing home. A sad ending… but my Daddy used to say, lifting a glass of good Pilsner, “However long a life, it all comes to an end. So LIVE!”

As with their masked-ball entries, just like the cambric-covered newspaper ball “horse-droppings” the hosi managed to insert some humor whenever they could. There was never a glum reminiscing of their tragic youth without the balance of the funny stories, told and retold. What memories of these wonderful men! That must have been why we, their nine offspring, always enjoyed them so much. Their love and gaiety I still treasure today as I approach my eighty-seventh year in September.

*Starosta = elder, with the implication of something like “elder statesman” or “wise one”. It literally means “old person“.

Videos or other links.

Back to Grandma’s Album